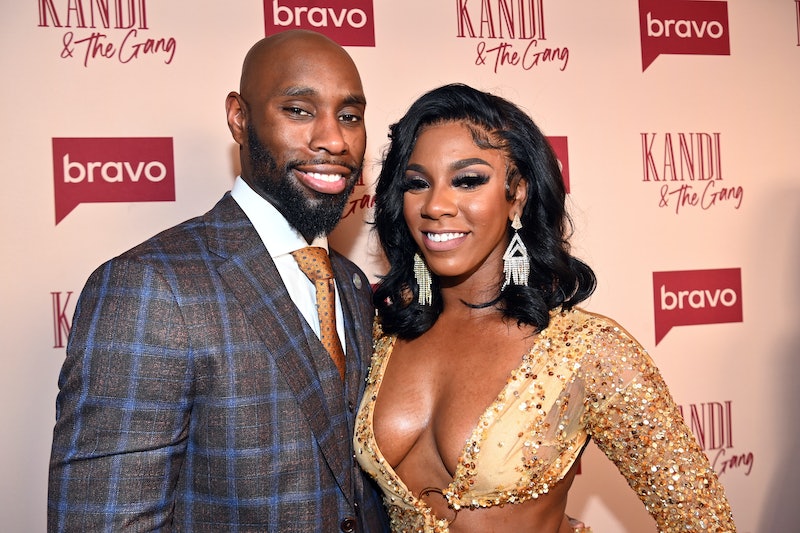 On a scale of 1 to 10, Kandi & The Gang’s Dom’Unique Variety rated her sexual tension with co-star Brandon Black as “like 100,000.” In fact, Brandon admitted on the show that he only started working at Old Lady Gang after spotting Dom bartending at the Atlanta eatery. Plenty of heavy workplace flirtation has ensued, and Brandon, who’s a manager at OLG, finally asked Dom on a date in a recent episode of the Real Housewives of Atlanta spinoff.

“I waited this long because, you know, it’s a conflict of interest at work,” he explained on the Bravo series, later adding that he’s not particularly “worried about the repercussions of a manager seeing an employee.”

Though the two clearly connected during their night out, Dom swiftly shut down Brandon’s attempt to go in for a kiss because she doesn’t lock lips on the first date. “I definitely think it would be complicated with us working together,” she told Brandon, who agreed to take things slowly. “I’m trying to keep it cute.”

We’ll have to wait and see how their relationship unfolds on the show, but the two seem to still be on good terms after filming, if not outright dating. They posed together on the red carpet at the Kandi & the Gang premiere event at OLG on March 6. “I had a BALL!!!!!! This was the premiere party of a lifetime!!” Dom captioned an Instagram video afterward. It’s unclear what her relationship status with Brandon is, but they both follow each other on Instagram, which is another promising sign.

OLG owner and Real Housewives of Atlanta star Kandi Burruss said that she has “mixed feelings” about Brandon and Dom dating, but acknowledged that she and Todd Tucker — her husband and OLG co-owner — also met while working on RHOA Season 4. As such, Burruss said she would feel “like a hypocrite” for questioning or “trying to stop” the pair from dating, while Todd has stronger feelings about it. “Todd is like, ‘No, they cannot be both dating and working in this restaurant. They’re gonna have to be separated. Maybe we have to put one in a different location or something,’” Burruss recently told E! News. In a separate People interview, Kandi affirmed her stance: “I support their love.”

Whether or not things with Brandon last long-term, working at OLG isn’t part of Dom’s endgame. Though she’s the restaurant’s self-proclaimed “day one” bartender, she’s also a dancer who’s even performed with Megan Thee Stallion. Her “budding flirtationship” with Brandon might not be enough for her to consider quitting, but a full-fledged relationship could be different.

More like this
The Bachelor’s Christina Mandrell Comes From One Of Country Music’s Most Famous Families
By Brad Witter
Nicole & Chris Hinted They’re Still Together After 'Married At First Sight'
By Brad Witter
Jin-young Reflected On His Relationship With Seul-ki After 'Single’s Inferno'
By Brad Witter
Joey Essex Is Rumoured To Be Dating A 'Love Island' Favourite
By Sam Ramsden
Get Even More From Bustle — Sign Up For The Newsletter
From hair trends to relationship advice, our daily newsletter has everything you need to sound like a person who’s on TikTok, even if you aren’t.