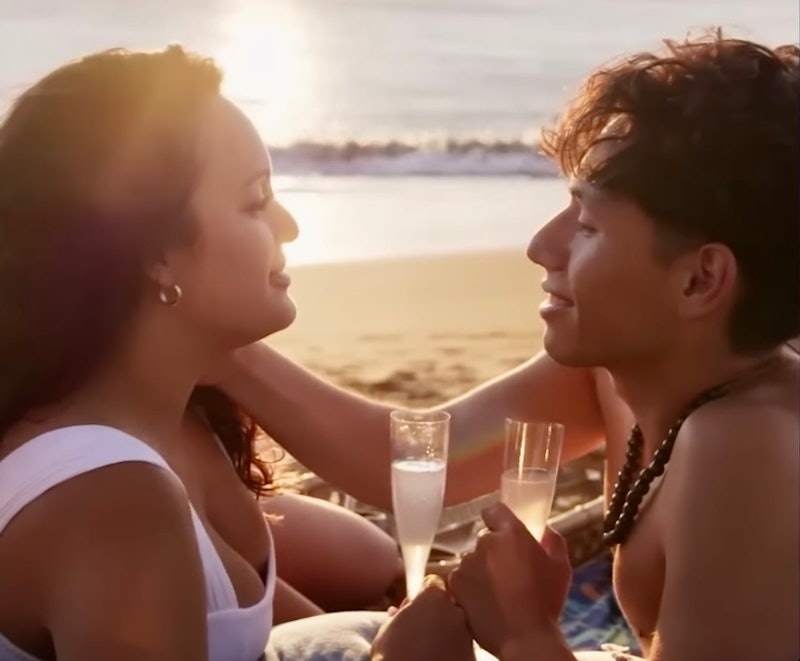 USA Network/screenshot
By Brad Witter
May 11, 2022

Though early clues suggested that original couple Edgar and Gillian ended Temptation Island Season 4, at the very least, on good terms, the May 4 episode put their three-year relationship in greater jeopardy than ever. Not only did Edgar and Marissa, one of the island’s singles, have sex, but Gillian also had to watch (and listen to) the footage in front of her female co-stars and host Mark L. Walberg at the bonfire afterward. “I’m like literally shaking,” she said during the episode. “That is crazy. Oh my god, I can’t breathe.”

It didn’t hurt any less rewatching the scene a second time during Temptation Island After Show, following Episode 8. Revealing that she almost left the island at that exact moment, Gillian — whose idea it was to join the show — still was unsure if she was to blame for Edgar’s hookup. The part she found “really sad,” though, was that they are best friends and “will always have” that bond. After all, Edgar had been mostly perfect, minus one previous cheating incident, up until that point, she shared.

Edgar, for his part, imagined separately that Gillian “probably felt very uncomfortable having to see that” and expressed remorse for putting his college sweetheart “in such an uncomfortable situation.” Explaining that he “did not fully know exactly what was being shown at the bonfire,” he admitted that, “regardless of how he felt about Marissa,” he broke their rule and “did not consider” Gillian’s feelings. “I did get swept up in the moment,” he added on USA Network’s after show. “I did get caught up in the island.”

Even so, viewers can’t ignore Edgar and Marissa’s chemistry, and both have discussed a potential future together, as well as their belief that they were together in a previous life. Though she couldn’t reveal if she and Edgar are together now, Marissa recently told Distractify that she had no regrets after Temptation Island ended. “A lot happens. Aside from filming, a lot happens,” she shared. “And I don’t regret anything at all. If I had the chance to do it again, 100% I would do it again and do it the same way. Everything that happens after was worth it. It was fun. And I’ll cherish that forever.”

Another clue? She still has the “super, super sweet” poem Edgar wrote for her in Spanish. Despite her Puerto Rican heritage, Marissa doesn’t actually speak Spanish, so he had to translate it for her later. Ultimately, their relationship unfolded in a way that was “not how [she] expected,” regardless of their current status.

For what it’s worth, Edgar and Marissa still follow each other on Instagram. The same is true of him and Gillian, so you’ll have to tune in to the final bonfire to find out which of the women, if any, he was with when he left Maui — and if they’re still together today.