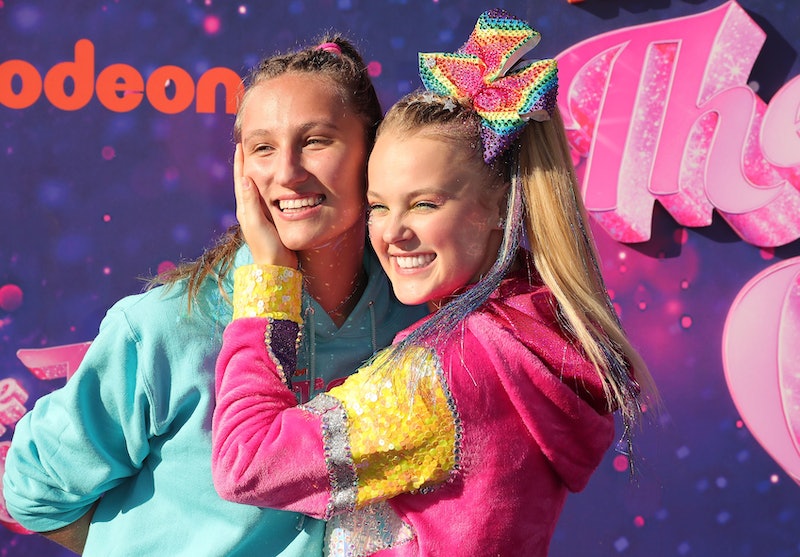 Following weeks of speculation, it appears that JoJo Siwa and Kylie Prew are back together. “If you love something let it go, if it comes back….,” Siwa captioned a May 5 Instagram photo of her kissing Prew’s cheek at Florida’s Disney World, adding a white heart and infinity emojis. The YouTuber seemed to further confirm the reconciliation by sharing Seventeen’s Instagram post announcing the two are dating again following their amicable October 2021 split after about nine months together. Everyone from Paris Hilton to Siwa’s Dancing With the Stars castmates, including Olivia Jade, Amanda Kloots, and dance partner Jenna Johnson, replied with supportive comments.

In fact, it was on Hilton’s This Is Paris podcast that Siwa announced the breakup in the first place. “But she is literally still my best friend. I talked to her yesterday, she just got a new puppy. She’s awesome. She’s having the time of her life, I’m having the time of my life,” Siwa explained in November. “I’m really lucky that I didn’t lose her completely because, you know, even though relationships end, friendships don’t have to end.”

Indeed, after Siwa announced in March that she was “not single” anymore, People reported the following month that she and Prew had been in constant contact since their split. “They’re talking a lot and they’re still good friends who are very close,” a source told the magazine in late April, adding that they still “like each other” and there were “no bad feelings.” (Despite Siwa being linked to TikTok star Katie Mills in December, neither ever confirmed they were in a relationship.)

Also in April, the Dance Moms alum declared to Extra that she was “very much in love,” but stopped short of confirming the reignited romance with Prew. “I’m very happy. I’m very much in love. I… am really lucky that I’m loved unconditionally, too, by this human, and she is awesome,” Siwa told the outlet. “It would be really nice if she was at my home. We’re long-distance, which is always hard. She is the best, and FaceTimes and when we do actually get to see each other, my heart is just like…”

Siwa’s comments contained a lot of clues, but when asked directly if she and Prew were back together, she declined to share at the time. She only promised to answer “one day,” after she had gotten the OK from her partner first. Though it remains unclear exactly when and how the reconciliation happened, it seems they’re now both ready to go public again. And where better to do so than the so-called happiest place on earth?