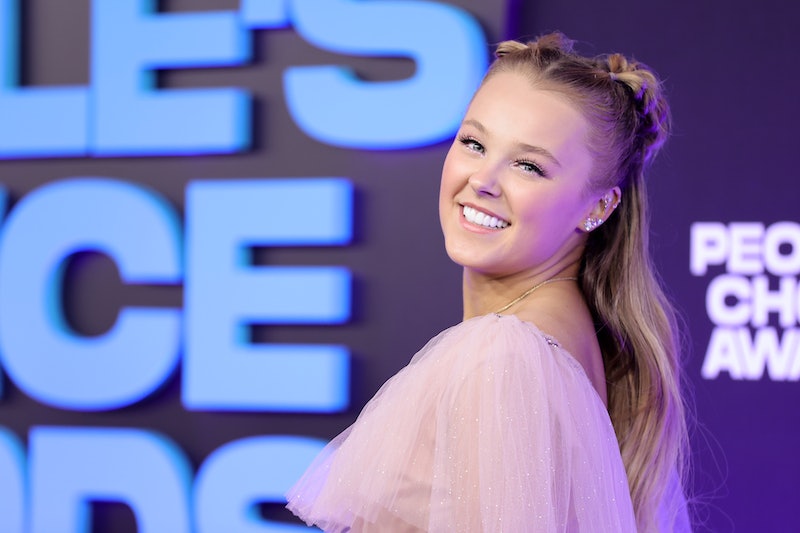 JoJo Siwa is once again off the market. During the March 30 episode of the “Rachel Uncensored” podcast, the former Dancing With the Stars contestant told host Rachel Ballinger that she’s in a new relationship following her October split from Kylie Prew. “I was gonna erase my whole bio but just put the lock [emoji],” JoJo said, hinting that she’s totally committed to her new partner. “She’s exclusive, ladies and gentleman,” Ballinger responded.

The 18-year-old social media star confirmed that she moved on with someone new. “We’re not single,” she said. “I say ‘we’re’ because it’s me and my multiple personalities within myself… I am not single and I don’t want to mingle. No, I’m a loyal lady.” Siwa explained that she’s been “around the block,” and although her past relationships didn’t work out, she has learned a lot of valuable lessons. “I tried a lot, and I learned a lot and I’m very, very, very happy where I am now,” she said.

Siwa spoke about her new romance again in an April 2 interview with E! News on the GLAAD Media Awards red carpet. “I am lucky to be in love,” she said after revealing that she and her mystery partner have been together for “a few months.” “I think love is a very special thing that sometimes can be taken for granted. And I’m very lucky to have unconditional love.” She also hinted that her new love is someone she’s known for a while.

"I’ll say the world is going to be very happy when I say who it is,” the internet star revealed. But fans will have to wait to find out. “I told my girlfriend, I said six months, but we both know I’m not gonna keep it a secret for that long," JoJo joked. “So, I don’t know, when it feels right.” She also said that she’ll probably reveal her girlfriend sooner rather than later because she’s terrible at keeping secrets. “Odds are it'll slip out soon who it is,” she said.

Siwa may be experiencing relationship bliss right now, but her love life hasn’t always been smooth sailing. While riding a wave of high-scoring performances on Season 30 of DWTS, the news broke that she and Prew split after nine months together. A source told E! News on Oct. 25 of last year that the former couple “split weeks ago.”

A separate source told Us Weekly that despite going through a breakup, JoJo was focused on winning DWTS with her dance partner, Jenna Johnson. “JoJo is focusing on the competition and giving her all,” the insider said. “While it’s a rough time for her, she’s handling DWTS very professionally and still putting on a smile and giving 100 percent. She doesn’t want to let down her fans.”

Siwa announced that she was dating Prew in February 2021, less than a month after coming out. However, she opted not to share Prew’s identity until their four-week anniversary. While Prew attended Siwa’s first few live DWTS shows, she was noticeably absent from the audience toward the end of the season. Us Weekly reported that some of the show’s cast members became aware of the split before fans, who suspected they may have broken up based on cryptic Instagram posts.

Two days before her final public appearance with Prew at Disneyland on Oct. 11, Siwa posted footage from a dance rehearsal and wrote, “This has been a WEEK. My brain has never been so overwhelmed/overloaded with not only work but also personal life.” Elsewhere in the caption, she wrote, “Even though this week has been one of the hardest in my life for so many different reasons, it’s also been one of the best. I’m thankful for every time I smiled this week and every time I smiled in the last 18 years.”

Speaking about her Oct. 12 performance on DWTS’ Disney Villains night, Siwa told Us Weekly dancing became an “escape” that helped her overcome tough emotions. “What goes on in my personal life every day is something. However, this week was very, very extreme and something that I had never gone through and something that I’ve never felt before,” she said. “It’s tough and it’s tricky, but luckily I have really good people in my life. And I’m really lucky that every day this week I got to spend three hours with my best friend in rehearsals and we got to dance.”

Alongside a clip from the show’s Grease Night episode posted on Oct. 19, Siwa expressed appreciation to Johnson for “not only being the best mentor/pro ... but also being the best friend.” Potentially alluding to the breakup, she continued, “I’ve been through thick and thicker in the last few weeks and she’s been there for me every second that I need her to be!!”

Siwa opened up about the impact long-distance dating had on their relationship in April. “I. Don’t. Like. Saying. Goodbye,” she captioned a tearful selfie posted to her Instagram Story, per E! News. In a follow-up post, she noted, “You guys are confused on why I was crying on my last Story. Nothing happened. We just are long distance, and we had to say goodbye today, and I’m sad.” (Siwa lives in Los Angeles, and based on her Instagram, Prew appears to live in Florida.)

More like this
RHOP’s Robyn Dixon Explained Why Juan Paid For Another Woman's Hotel Room
By Brad Witter
'RHOSLC' Star Jen Shah Refuses To Do A Post-Sentencing Interview With Andy Cohen
By Brad Witter and Jake Viswanath
Joey Essex Is Rumoured To Be Dating A 'Love Island' Favourite
By Sam Ramsden
Michael B. Jordan Tackled His "Public Breakup" With Lori Harvey On 'SNL'
By Brad Witter
Get Even More From Bustle — Sign Up For The Newsletter
From hair trends to relationship advice, our daily newsletter has everything you need to sound like a person who’s on TikTok, even if you aren’t.

This article was originally published on Oct. 25, 2021