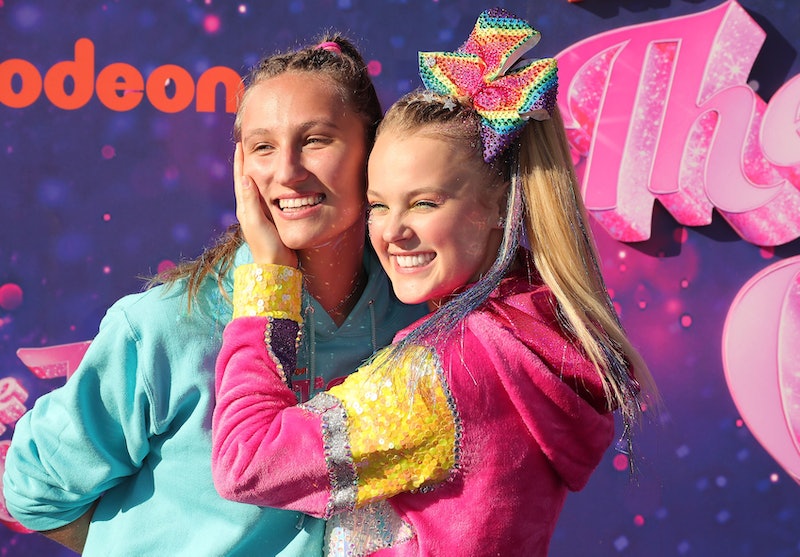 Although Jojo Siwa is playing her cards right in many industries — television, music, fashion, film, and social media — the 18-year-old has still made time for a dating life. Now, as a contestant on Season 30 of Dancing with the Stars, millions of viewers will be interested in learning more about her love life, especially as she’ll be the long-running show’s first-ever contender to compete with a same-sex partner on the dance floor.

Siwa’s fanbase was already in the millions before DWTS, thanks to her YouTube fame, songs, albums, Nickelodeon TV shows, made-for-TV films, and Lifetime’s Dance Moms, not to mention an upcoming reality program titled Siwas Dance Pop Revolution. The teen sensation grabbed headlines and earned raucous applause in early 2021 when she revealed she’s a member of the LGBTQ+ community. At first, she said she wasn’t sure how to label her sexuality, which is completely understandable for a teenager. Since then, Siwa has clarified her stance: “I would say that I am pansexual, because that’s how I have always been my whole life is just like, my human is my human,” though she added that she does use the terms gay and queer.

Siwa has been very open about her relationship with Kylie Prew, her first-ever girlfriend. However, it seems they’ve split as of October 2021. But how did the two lovebirds meet, and how long were they together? Here’s a look at JoJo Siwa and Kylie Prew’s relationship timeline.

Siwa and Prew met on a cruise ship more than a year before they entered into a romantic relationship, and as Siwa confirmed on Instagram, they were nothing more than friends for a long time. “After being my best friend for over a year, January 8th 2021 I got to start calling this exceptional human my Girlfriend,” Siwa revealed in an Instagram caption that confirmed the start date of their inspiring romantic relationship.

The launch of their dating life quickly meant so much to so many young fans as well as some older members of the LGBTQ+ community who are thrilled to watch them be so open with their feelings. February was a big month for Siwa and Prew. First, Siwa appeared on The Tonight Show with Jimmy Fallon (via video, as the coronavirus pandemic prevented an in-person appearance), and the host jumped right in, asking about her recent coming out and her girlfriend. During the interview, Siwa had some nice things to say about Prew, and she revealed that it was Prew who encouraged her to go public with her sexual identity in the first place.

Not long after her time on Fallon, Siwa and Prew celebrated their one-month anniversary. In a sweet Instagram post of the two, Siwa called her girlfriend “the most loving, supportive, happiest, protective, and just the most beautiful perfect person in the world,” admitting how happy it makes her to “get to call her mine!” She wrapped up the caption by stating, “Happy one month to my girl! I love you more and more every day!”

Later in February, Siwa and Prew enjoyed their first Valentine’s Day as a couple. Prew also got Siwa a present, gifting her girlfriend a sweatshirt that reads, “Warning I am taken. Don’t flirt with me it’s for your own good.”

Most couples don’t make a big deal about being together for two months, but then again, most pairs don’t include the mascot for all things sunshine-and-rainbows that is JoJo Siwa. They opted to mark the occasion on their respective Instagram Stories with posts gushing over one another in a fashion that reminds the viewers that young love still exists.

On April 8, Siwa presented at the annual GLAAD Media Awards, where she bestowed an honor to none other than Elmo, who accepted on behalf of the legendary Sesame Street. During her intro, the social media powerhouse reminded everyone that she had just recently become a member of the LGBTQ+ community, and she lovingly referred to Prew as “the best, most amazing wonderful girlfriend in the entire world.” Only one day before this appearance, Siwa was on the cover of People magazine for a story in which she opened up about her decision to share her sexuality publicly.

Just a few days later, Siwa posted a picture of herself on her Instagram Story with tears in her eyes. She wrote, “I. Don't. Like. Saying. Goodbye,” and fans quickly jumped to the conclusion that the pair had split. The singer had to clear things up, explaining that they were still together, but that they are in a long-distance relationship, which is particularly hard on the new lovebirds.

On May 19, Prew wished her girlfriend a happy birthday as Siwa turned 18 years old, a momentous occasion in any person’s life. What they did to celebrate wasn’t shared, but looking at the other parties they’ve thrown, it was likely a colorful affair.

June marked Siwa’s first public Pride as a member of the LGBTQ+ community, and from the looks of it, she and her girlfriend lived it up. She posted more photos of the pair on her Instagram, but she also shared an incredibly positive message to the world, proclaiming, “It’s time to celebrate being who you are and LOVING who YOU wanna LOVE!!”

On July 8, Siwa and Prew celebrated half a year together, which is quite the accomplishment for a couple so young. Naturally, they shared their anniversary via their Instagram Stories, where they showed everyone that the teens were having a nice dinner at what looked like an upscale eatery. Siwa also arranged an incredibly sweet display for her love at home.

In August, Siwa went on her mom’s Success with Jess podcast, and she wasn’t alone. The superstar brought Prew along for the interview, and the two opened up about how they met, their early friendship and even how they became a couple. It was a lighthearted chat, but what made it so special was how welcoming and warm Jess was, as not every parent of an LGBTQ+ child acts that way.

August also marked National Girlfriend Day, which Siwa didn’t miss. The social media powerhouse posted a sweet photo of the pair on Instagram, captioning it, “Happy national girlfriend day to the absolute best girlfriend in the entire world. I love you more than I could ever explain ❤️ thank you for being there for me 25/8❤️”

Siwa and Prew made their red carpet debut in September, though the carpet wasn’t actually red at all. The pair posed for photos on the all-purple shag rug at the premiere of Siwa’s new musical film The J Team, which was released on Paramount+. They even shared a kiss in front of photographers. After that, Prew cheered for Siwa as the teen sensation began competing on Dancing with the Stars’ Season 30, which premiered on Sept. 20.

After nine months of very publicly being in love, Siwa and Prew reportedly called it quits, according to a source that confided in E! News. While the sad news broke toward the end of the month, the split could have occurred as early as September, as the two were apparently no longer together for “weeks” by the time the headlines appeared.

Fans began to suspect the two were not in a relationship any longer after Siwa opened up during a red carpet interview on Oct. 15, saying, “I struggle when anything is new and I went through something that was new and I had never gone through before ... I cried about it last night.” She also added, “I am missing a piece of me that is the biggest piece of me.”

Weeks after fans began to speculate that Siwa and Prew had gone their separate ways, she confirmed their suspicions while appearing on Paris Hilton’s podcast This Is Paris. Siwa made it clear that her former beau is great, but that it was just another case of “right person, wrong time.” Siwa was quick to point out that while she and Prew are no longer romantically involved, “She is literally still my best friend,” adding that she “talked to her yesterday; she just got a new puppy. She’s awesome. She’s having the time of her life; I’m having the time of my life.”

The two young women aren’t out of each other’s lives entirely. “I’m really lucky that I didn’t lose her completely because ... even though relationships end, friendships don’t have to end,” she shared. “I’m really happy that I remember all the fun times, all the good times.”

More like this
Jameela Jamil Defends Sam Smith After Trolls Body-Shamed Them
By Jake Viswanath
Adam Lambert Called Out The George Michael Biopic Over Potential Casting
By Sam Ramsden
"Lavender Haze" Star Laith Ashley Breaks Down Filming With Taylor Swift
By Jake Viswanath
Michael B. Jordan Tackled His "Public Breakup" With Lori Harvey On 'SNL'
By Brad Witter
Get Even More From Bustle — Sign Up For The Newsletter
From hair trends to relationship advice, our daily newsletter has everything you need to sound like a person who’s on TikTok, even if you aren’t.