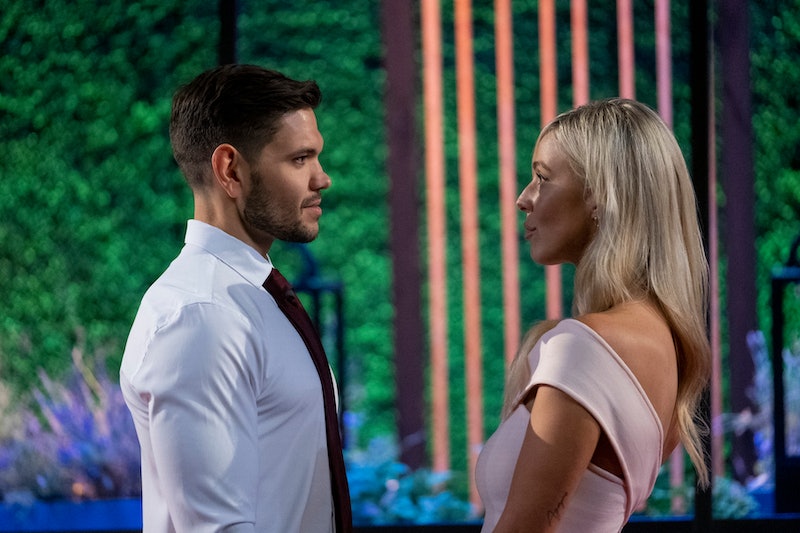 After developing a strong connection on Love is Blind Season 2, Kyle Abrams and Shaina Hurley discovered what could be a major dealbreaker: He’s an atheist, while she’s a devout Christian. Shaina, 32, asked the 29-year-old construction worker if the “clear differences” in their core values scared him. He replied that he’ll “never find that perfect person where everything aligns,” and that their opposing perspectives didn’t change how he felt.

“Shaina puts up with my strong personality. She knows how to make me happy, and whenever I hear her voice, she just, like, lifts my spirits,” he explained on the show. “Am I gonna throw away an amazing woman because we disagree on religion?” The answer was no, and Kyle soon proposed to Shaina with his “very, very religious” mother’s engagement ring, telling her that she reminded him “so much” of her. “She makes me the happiest,” Kyle told Shaina of his mom. “I want someone who resembles her.”

Though Shaina accepted Kyle’s proposal, she cried in an interview afterward. “I guess it’s just the idea of, like, being engaged again, and, I just don’t want to make another mistake,” she explained to an off-camera producer, referencing a previous engagement before the show. “I care about Kyle a lot, but there’s issues, huge things that we both do not see eye to eye on. ... It’s terrifying.”

Another problem? Shaina also developed feelings for a different contestant, Shayne Jansen, and said that she could still “envision a life” with him even after getting engaged to Kyle. So she went to Shayne to confess her feelings, knowing that he intended to propose to Natalie Lee — something Shaina admitted was a “f*cked up” move on her part. Nevertheless, she was too late, and she and Shayne agreed to keep the conversation private.

“I just got engaged to a man and then told another man I had feelings for him the whole time, but never really was clear or transparent with him,” Shaina said. “Now I’m talking about the man I’m engaged to even though we have all these huge differences.”

When Shaina and Kyle finally met face-to-face, it wasn’t exactly the fairy tale moment they’d been hoping for. “This engagement, I’m scared that, like, given our differences and everything, if it’s gonna be a problem. And so I’m just like freaking out,” Shaina told Kyle, adding that she didn’t want either of them to “make a mistake” and have their relationship turn into something “toxic and ugly.” She agreed to at least give it a shot, though.

Kyle was “kind of taken aback” that she still had so many reservations, but remained confident that they would get past their differences. Once they made it to Mexico, Shaina worried that things were a “little too good to be true,” while Kyle offered to make major changes for her: He ate meat for the first time in eight years on their first date, and told Shaina that she could teach him more about Christianity. Kyle later compared Shaina to gold-plated dynamite, noting that she was “unlike anyone else” he’d ever met.

Despite his best efforts, Shaina ended their first date by 7:40 p.m., explaining to Kyle that she wanted to do things “the right way” and spend the night in separate rooms. Once apart, Shaina questioned the relationship even more, imagining that neither of them would change their beliefs. She also still had Shayne on her mind, and decided she might leave Mexico single.

Kyle later explained to the cameras that Shaina had decided to end their trip early, but that he was convinced he could “change her mind” about him. “She’s a horrible communicator,” he said. “I’m a little worried. I’m going to have to adjust a lot, I think, in order for us to move forward with our relationship. Eventually, I’ll get more confident physically around her. I’ll grow on her a little. Shaina is gonna be madly in love with me at the end of this, ready to get married.”

Back in Chicago, the two met for coffee, and Shaina, who was not wearing her engagement ring, explained that the relationship was “moving way too fast” and she “just was not comfortable ... sharing a bed” with him. She also remained worried that their views would never change and that they’d be stuck having the same argument for the rest of their lives. Even so, Kyle refused to “let go and give up that easy” on their relationship because a woman like her is “hard to find.”

Meanwhile, Shaina told the cameras that she intended to pursue Shayne — who by that point was also engaged to someone else. “I chose Kyle. I said yes to Kyle, but I can’t stop thinking about Shayne,” she said. “Regardless of him deciding to marry Natalie, I’m here to find my husband, not to take a back seat to Natalie with her feelings for Shayne.”

Before officially pulling the plug on her relationship with Kyle, Shaina decided to introduce him to her parents and brothers hoping to get “more clarity.” Shaina’s family liked that Kyle shared their love for the outdoors, dirt bikes, and “being an American,” but they couldn’t get past the fact that he’s not Christian. “I would not be able to give Shaina my blessing,” her mom said, noting that her daughter looked like a “deer in headlights” with Kyle.

So after Kyle suggested that they move in together, Shaina officially ended their engagement. “I need someone who is the same faith as me. I want a man who’s able to spiritually lead me,” she told him, adding that “no one will ever be bigger than God” in her life. After Shaina admitted she’d felt that way since day one, Kyle said it felt like she’d been lying to him the whole time and never should have accepted his proposal and left the pods with him. Shaina conceded that it was “selfish” of her to “drag it out this far,” but Kyle still thought she “messed with” him and that it was “bullsh*t” she wasn’t “even willing to try” to make the relationship work.

After their split, Shaina couldn’t stop thinking about Shayne, who she finally got to meet in person at a cast get together in Chicago. During the outing, Natalie described a bizarre phone call with Shaina, who told her she had another man lined up for her “if things don’t work out with Shayne.” Shaina later tried to clear up the situation with an irritated Shayne, claiming that his fiancée had taken her comment “out of context” and that she was just joking. “I feel like I’m being portrayed as a villain in your guys’ … f*cking fake-ass relationship,” she said, adding that it’s “comical” that he and Natalie think they’re compatible. But the conversation didn’t change Shayne’s mind, and he soon returned to Natalie.

Though Kyle and Shaina are no longer together, they do still follow each other on Instagram, suggesting they’re at least still on good terms (or just avoiding spoilers). Since filming Love is Blind, Kyle has shared photos of himself doing tricks on a jet ski as well as dressing a dog named Linus in a Supreme hoodie. He also welcomed a niece in October. Shaina hasn’t been particularly active on social media, though her July vacation to Greece would have made a great couple’s trip if she and Kyle — or even she and Shayne — had ended up together.