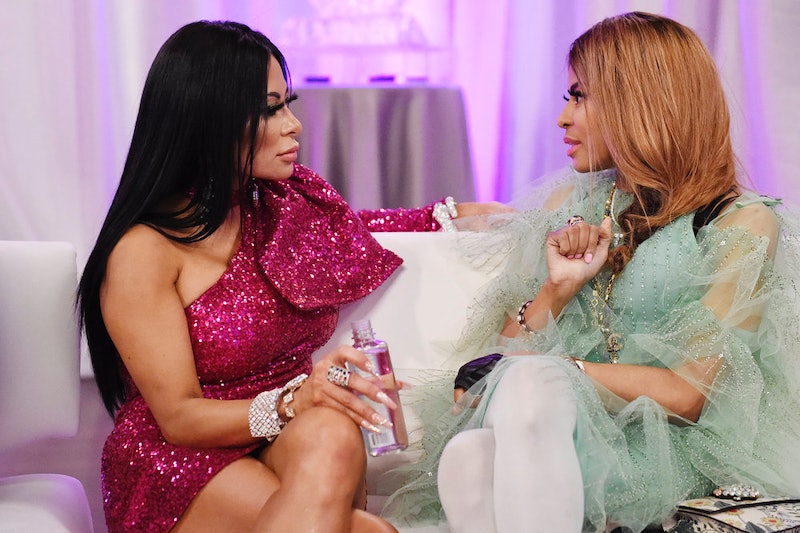 Mary Cosby's "hospital smell" comment is only the beginning of her drama with Jen Shah on The Real Housewives of Salt Lake City. Though the women seemed to make amends in the show's second episode, Jen later called Mary "irrelevant" behind her back, admitting that she wasn't actually over their feud, which will continue to play out in the rest of the season.

In the RHOSLC trailer, Jen accuses Mary of making racist comments, something that continues to be a source of contention — though there still seems to be some hope for their friendship in the future. "Where we stand now is when Mary wants to have a discussion and talk, I'm totally open to doing that," Jen told Bustle in early November, adding that the entire cast is at least cordial with each other. "But I hold true to my beliefs, and I believe treating people equally and fairly is the right thing to do. Hopefully I can give her the benefit of the doubt, and she will be able to have that conversation."

After all, Jen said she was "extremely excited" when she first met Mary because she understood the difficulties associated with being raised in Utah as a woman of color. Eventually, though, she learned they had "totally different" experiences. "I really grasp and take hold and take pride in my culture and my ethnicity and my family's, but she's kind of like the opposite, which I have a hard time wrapping my head around," the JXA Fashion founder said.

Judging by social media, the two don't appear to have reconciled. While live-tweeting the show's episodes, Jen hasn't shied away from throwing shade at Mary, including taking a dig at the outfit she wore to a party at Shah Chalet. She also referenced Mary's Faith Temple Church in the caption of a Nov. 25 clip of Tiffany Haddish shouting such things as, "This place is nasty!"

Mary, on the other hand, isn't particularly active on social media. Fans will just have to wait and see what happens at the reunion.