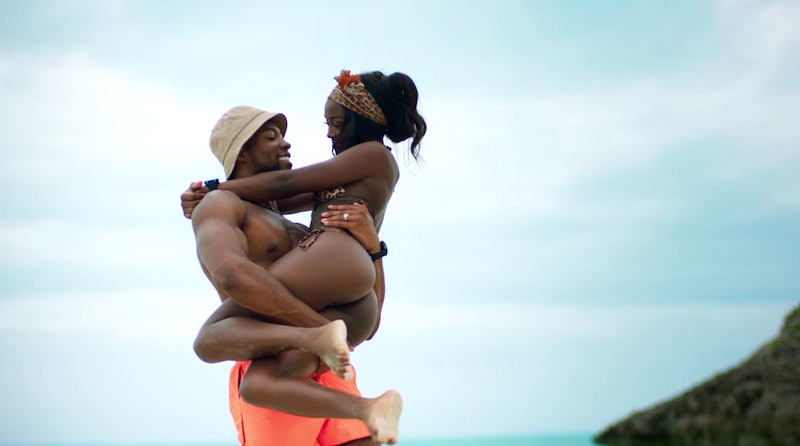 Spoilers ahead for the Season 2 finale of Too Hot to Handle. Within the first few hours of arriving at Too Hot To Handle’s Season 2 villa, New York City native Melinda Berry and Paris-based Marvin Anthony hit it off. But it didn’t take long for Lana to quash their excitement, revealing that they weren’t on just any reality dating show, but one that challenges them to abstain from kissing, sex, and even self-gratification in exchange for a prize of $100,000. Melinda’s first thought after hearing the news? “Oh no, oh no, I’m f*cked,” she tells Bustle. “I was freaking out, I was so scared, because I’m like, ‘I can’t help myself.’ I was just so nervous ... but at the same time I was excited to go on a new journey.”

Though Melinda and Marvin didn’t hesitate to break the rules to share a way-too-expensive but admittedly worth-it kiss on their second night in the villa, the pair’s relationship hit a snag after Melinda drunkenly locked lips with fellow contestant Peter Vigilante on the same night. The two were eventually able to talk through it — with Melinda pushing herself to be vulnerable with Marvin about her feelings for him — but they still had a lot of work to do before they found their footing.

Their budding relationship took another dive after a few new additions to the house caught Marvin’s eye, and he distanced himself from Melinda. But a double date made him realize that he missed his relationship with her. The realization was an expensive one, as it led to the two having sex — a rule break that cost them a hefty $20,000 deduction from the prize pot and, understandably, pissed off the rest of the villa residents. But the fallout ultimately brought them closer, and Marvin tells Bustle that the men’s workshop with mindfulness coach Keith Mitchell was key to helping him understand what he needed to work on in his relationship with Melinda.

It didn’t take long before Lana gave the pair a night in the suite, offering them the opportunity to regain more money than they’d lost...if they could refrain from breaking any more rules and prove their connection was more than physical. Not only did they pull it off (though it clearly wasn’t easy), they were also rewarded with a date on a yacht — which led to Marvin asking Melinda to be his girlfriend.

They ended the show together, but being on opposite sides of the Atlantic ocean -- particularly in the middle of a global pandemic -- tested their relationship, and they ultimately parted ways after filming. “It was definitely quite complicated, our relationship outside of the villa, because in the villa it was quite like a fairy tale, everything was perfect,” Marvin explains. “But then I went back to France, and with the coronavirus and everything… It made it harder being away from each other.”

Still, the two are hopeful they can make it work. Marvin says they’ve been talking again lately and that they have plans to visit each other. “We had some trouble in the start, but now it’s going way better, and we understand each other, and we’re going to see each other soon, so we’ll see what happens!” Marvin says.