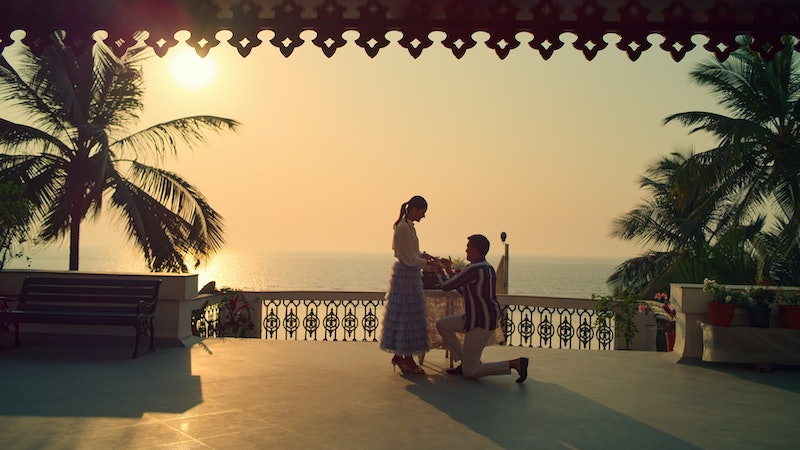 He may not have clicked with any of Sima Aunty’s matches, but returning cast member Pradhyuman Maloo still found love during Indian Matchmaking Season 2. In Episode 4, the jewelry designer explained that he’d been dating a woman he met at a party named Ashima Chauhaan for several months. Despite the pair finding each other without the help of a matchmaker, Sima described Pradhyuman and Ashima as a “promising couple” and a “perfect match.”

After Pradhyuman introduced Ashima — a skilled writer, singer, and dancer — to his friends at his new Mumbai restaurant, their courtship escalated quickly. By the episode’s end, Pradhyuman asked “soul sister” Ashima to marry him in a champagne-filled seaside proposal, sharing that she understood him better than anyone else. Following a whirlwind of wedding planning, viewers eventually saw Pradhyuman and Ashima marry in a lavish Udaipur ceremony. The Season 2 finale picked up two weeks after they became husband and wife, with the two facing a new challenge: the division of closet space.

Even before Indian Matchmaking’s second season premiered on Aug. 10, Pradhyuman and Ashima made no secret of their marital status on social media. As early as December 2021, Pradhyuman described them being addressed as Mr. and Mrs. Maloo at his Ekaa eatery. “It was a moment when our eyes met each other and we smiled,” he wrote. Meanwhile, in the caption of a March 2022 Instagram photo, Ashima revealed that she married her best friend. Then, as recently as Aug. 1, she referred to Pradhyuman as her husband, joking that she was stealing the Nornament creative director’s “breathtaking brooches” and turning them into pendants.

Even before they married, the couple had been sharing their relationship on social media for almost a year before Indian Matchmaking premiered. In August 2021, Ashima first posted an Instagram photo with her then-boyfriend, celebrating “a year and many more to go” together. She also captioned a February 2022 photo from a trip to the Maldives, “You are my lovestory, and I choose to love you forever.” Since then, the social media influencer, who won an award for her work on a 2018 Jammu tourism short film, has also been promoting Pradhyuman’s brand by modeling his jewelry on her Instagram.

Pradhyuman, for his part, wrote about finding people who make life’s little moments beautiful in October 2021, thanking Ashima “for making so many moments worth living for.” He also noted that the accompanying photo was taken during their “perfect date under the sky with some amazing singing, dancing, food and plenty of love.” He added, “Looking forward eagerly to spending many more dates with you.”

Now, the couple appears to be enjoying the honeymoon stage as they navigate their first year of marriage.