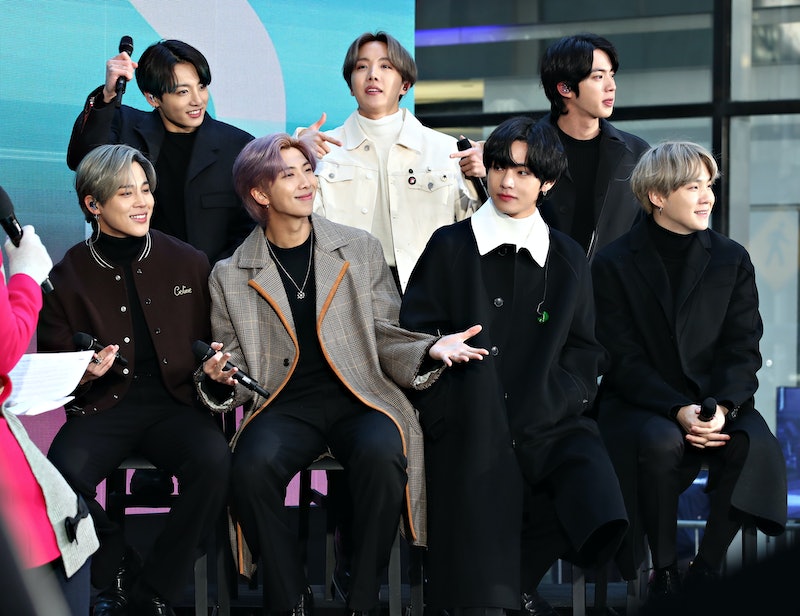 MTV is billing this Sunday's 2020 VMAs ceremony as live, but not all of it may be. According to Pop Tingz, one of the VMAs stages was reportedly already being broken down on Aug. 27, several days ahead of the Aug. 30 air date. That stage may have been the one used to film host Keke Palmer's segments, as they would have been easy for her to pre-tape. It's also likely that the celebrity acceptances speeches were filmed remotely in advance, as well as the tribute to frontline medical workers.

Still, the VMAs website says that the awards will air "live from multiple outdoor locations across New York City," so it's likely the performers — including Lady Gaga, BTS, and The Weeknd — will still take the stage day of. Vulture reported that the ceremony was originally set to take place inside Barclays Center in Brooklyn, but that those plans changed when it became clear the pandemic wouldn't be slowing down. Now, the stars will perform on undisclosed outdoor stages all across New York boroughs with "limited" audiences, per Rolling Stone.

TMZ found the audience requirements for a Maluma and CNCO performance, and they were pretty strict. Only local fans are allowed to attend, and only if they were tested for coronavirus on Aug. 23 and have self-isolated until the Aug. 30 show. They can bring one guest, but only if that person is already living and quarantining with them. The amount of fans allowed to watch will also presumably be limited so that social distancing can be practiced.

Per Rolling Stone, the VMAs will be the first live awards show in America since the start of the pandemic, and MTV is hoping to pull everything off in the safest and most entertaining way possible. Pre-taping some segments may have been the only way to accomplish that.

More like this
Kim K Is Putting Kanye’s Memorabilia — Like Grammys & Clothes — In A Vault
By Jake Viswanath
The 'Love, Lizzo' Harry Styles Scene Is Just 1 Moment That Made Fans Feel Seen
By Brad Witter
Mariah Carey Is "So Proud" After Her Kids Joined Her In The Thanksgiving Day Parade
By Stephanie Topacio Long
The 'X Factor' Releases Unseen Footage Of Kelly Rowland Forming Little Mix
By Jake Viswanath
Get Even More From Bustle — Sign Up For The Newsletter