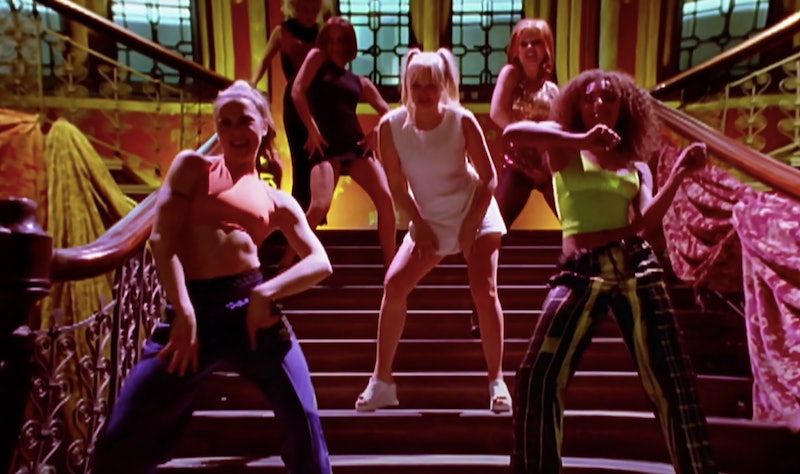 An anthem for the ages, "Wannabe" taught a generation of women about the importance of female friendship and to always go after what they want (what they really, really want). Now there's news that the Spice Girls may be remaking their 1996 classic and all I can say is please let this be real.

Sadly nothing has been confirmed yet (I have reached out to the band's rep and will update you if I hear anything), but as a source told The Sun, Emma Bunton, Melanie Brown, Melanie Chisholm, and Geri Halliwell "were hoping to hit the road in 2021 to mark their big anniversary" but that plan was put on hold due to (you guessed it) coronavirus.

"They’re all in touch weekly and are trying to come up with new ideas on how they can do something special to mark the big day," the source said, adding that Mel C was the person who suggested doing something around "Wannabe," "including the idea of possibly re-working the video for social media."

The Sun reports that it's “exceedingly unlikely” that Victoria Beckham will be involved.

Despite the fact it was released almost 25 years ago, "Wannabe" remains one of the nation's favourite tunes and a global rallying cry for girl power. The video – which was filmed on the steps in the former Midland Grand Hotel in St Pancras, London – holds a special place for '90s kids and, in 2016, it was reimagined for a UN campaign that aimed to end poverty and tackle gender inequality. The campaign, run by Global Goals, released a short film shot in a style similar to "Wannabe" but featuring artists and women from all over the globe lip syncing to the iconic lyrics of the song.

And just last year, "Wannabe" was given another moment in the spotlight when Diplo and Charli XCX gave it a modern remake with their track "Spicy," which keeps the lyrics but swamps out the original melody for a tropical bassline. And the video? Well... you'll just have to watch it.

Can we expect something equally futuristic from Baby, Scary, Sporty, and Ginger? Only time will tell...