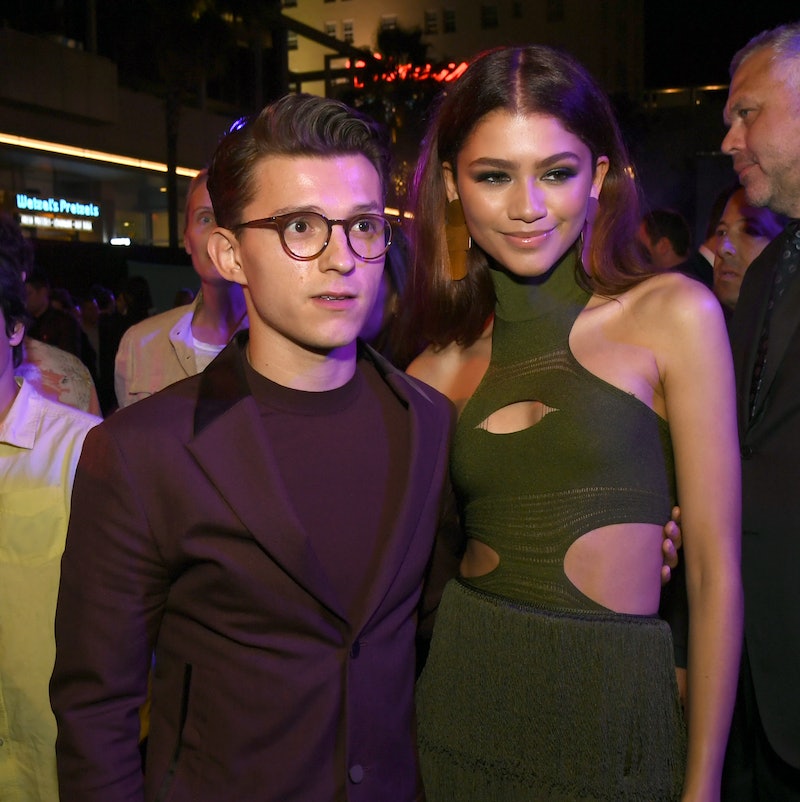 When two celebrities star in a movie together and form a close bond, it’s only natural for people to wonder if they’re romantically involved. Tom Holland and Zendaya are a prime example. Ever since 2017’s Spider-Man: Homecoming, fans have suspected that there was more than onscreen chemistry between the two. The co-stars have tried to put the dating rumors to rest many times in the past, but they’re going to have a harder time now that they’ve been caught kissing.

On Friday, July 2, Page Six published photos of the two out together in Los Angeles the day prior. The actors were snapped in Holland’s car, sharing laughs, smiles, and, yes, a smooch. Another showed them leaving a house with Zendaya’s mom, Claire Stoermer, who Page Six’s sources say lives in Silver Lake, the neighborhood where they were photographed.

Even before the photos, Holland and Zendaya never made a secret of the fact that they’re tight. Fans also picked up on a flirty vibe in their social media interactions. One exchange seemed to start it all in June 2017, when Zendaya posted an Instagram of herself and captioned it, “Stealing hearts since 96’.” Apparently, Holland couldn’t help himself and took a jab at the then-20-year-old by posting an Instagram of himself and writing next to it, “Stealing hearts since never,” and tagging Zendaya. She then replied to him by tweeting a screenshot of the then-21-year-old’s IG and wrote, “I really can’t stand him,” alongside four tears-of-joy emojis.

Of course, the British actor responded with a tweet reading, “Apart from when you want a part in Spiderman 2,” with four more tears-of-joy emojis. To that, she replied, “Watch yourself, I still have more followers than you right now...tread lightly my freind [sic]...tread lightly,” adding still more emojis.

Based on just those tweets, some people suspected they were more than friends, but Zendaya soon shut down the rumors. The Disney Channel vet took to Twitter that June and basically rolled her eyes at the romance speculation. In response to a Twitter user who had commented by tweeting, “Zendaya and Tom Holland, someone is cooking some sweet romance on Twitter today,” she wrote with pitch-perfect sarcasm. “Right, cause nothing says ‘sweet romance’ like dragging each other for filth on twitter,” she wrote.

While neither star was willing to cop to a romance at the time, they were both open about how they truly respect and admire one another. While chatting with EW Morning Live in June 2017, Zendaya gushed about her Spider-Man co-star, saying, “He’s great. I think the most important thing to me is that he is a good person, and it’s good to know that the person who gets to play your favorite superhero is actually a nice dude.” Holland also praised Zendaya, telling The Hollywood Reporter, “She is one of the most professional, hardworking people I’ve ever met in my life.”

Of course, that wasn’t the last of the dating rumors. Like a supervillain, they just kept coming back, especially anytime Holland and Zendaya reunited, like for their epic Lip Sync Battle episode or their hangouts in different cities, and that time Kiya Cole, Disney star Skai Jackson’s mother, appeared to confirm their relationship, only for her rep to say she’d been hacked. A picture is worth a thousand words, though, so Tomdaya shippers have a lot more to go on after the very cozy-looking photos from July 1. It’s safe to say that the rumors have returned — and perhaps are stronger than ever.

This article was originally published on July 7, 2017