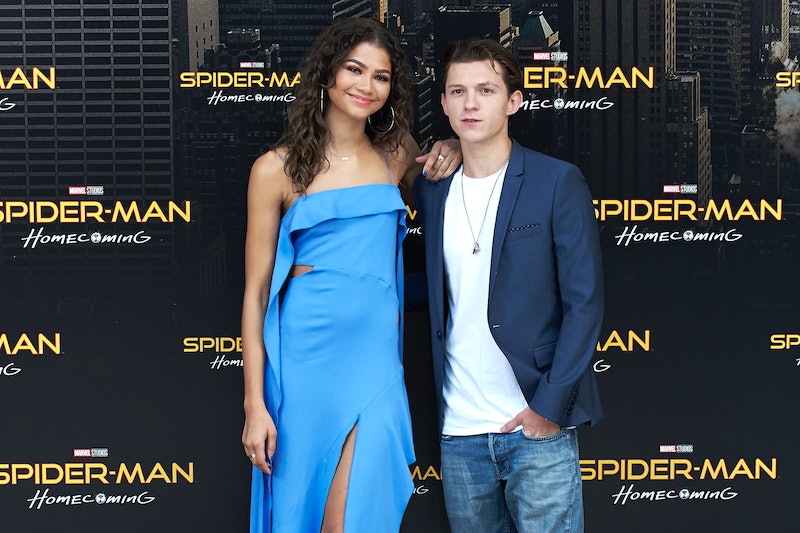 Whenever there's an epic romance in a movie, fans often can't help but imagine life imitating art. That's definitely the case for the two leads of Spider-Man: Far From Home. Ever since the first movie came out in 2017, Tom Holland and Zendaya dating rumors have circulated due to their chemistry onscreen and off. They weren't even official love interests in the first film, but fans really latched on to their IRL friendship. The two actors have squashed those rumors time and again, but they know it comes with the territory.

Holland and Zendaya obviously aren't hiding the fact that they genuinely get along, as seen by their Twitter banter and respect for each other. Plus, they blessed the world with the best episode Lip Sync Battle. They also hang out often when they're in the same city — all of these things combined have fans hoping that the chemistry between MJ and Peter will bleed into the real world.

However, Holland and Zendaya have said on multiple occasions that they're just good friends. Despite this, there are several fan accounts dedicated to their ship (Tomdaya, if you didn't know their couple name), and last September, an Instagram comment seemed to stoke the relationship fire more. Kiya Cole, the mother of Disney star Skai Jackson, responded to a comment supposedly confirming their relationship: "Yes. It's true. They been on the low for a while." Her rep since said her account was hacked and that she doesn't know about their personal lives.

In a new interview with ET Canada, Holland said that the rumors of a real-life romance can get annoying, but Zendaya said she believes that it "comes with the territory" of acting in Hollywood. "It's weird," Zendaya said, while Holland called it "a little annoying." Zendaya continued, and said, "We kinda knew what we signed up for a little bit... It is what it is." In an interview with Elle from earlier this month, Holland insisted he's not dating anyone at the moment but is "definitely a relationship person." He said, "I'm not the fleeting type at all; it's not my way of life."

In 2017, Zendaya also set the record straight about the status of their relationship. "We are friends," she told Variety. "He's a great dude. He's literally one of my best friends. This past how many months we've had to do press tours together. There's very few people that will understand what that's like at 20 years old."

Despite the actors being clear about their status as pals, fans likely won't stop shipping the two in real life anytime soon. But it's important to remember that valuing their friendship can be just as rewarding as shipping the actors. After all, the Spider-man duo get into lots of fun shenanigans online and on social media — like when Holland forgets how to appropriately tag someone in a pic on Insta — that prove they're awfully entertaining as platonic pals.

Meanwhile, it seems MJ and Peter are going to get a little more serious about their feelings in Far From Home, so if you're dying for some Tomdaya action then you can catch the movie to see love bloom between their fictional counterparts.