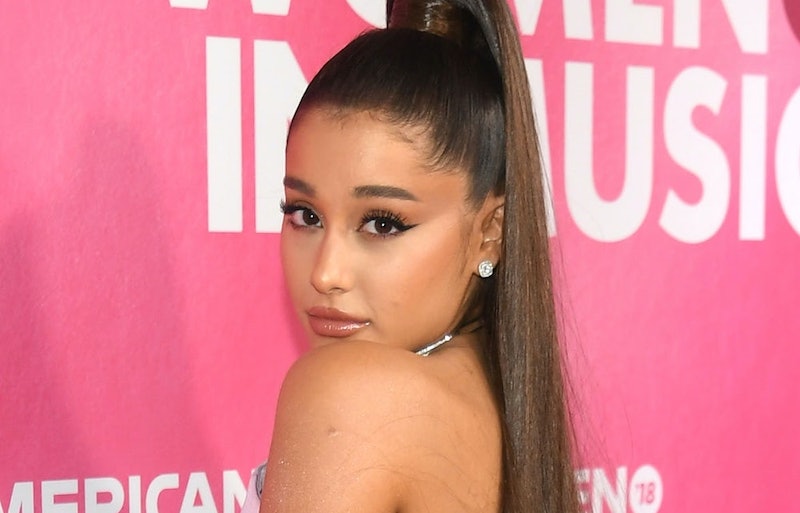 Whip out those thigh-high boots and renew those Netflix subscriptions: Ariana Grande announced that a Sweetener World Tour movie is headed to Netflix. On Monday, Dec. 21, the streaming service will release Excuse Me, I Love You, an intimate look at the pop star's London concert from last year. Grande announced the news on social media on Wednesday, Dec. 9, revealing that a trailer for the film — one she called a "love letter" to her fans — will drop tomorrow.

“Dec 21st, a year after closing, the sweetener world tour is coming home to u," she wrote in a lengthy Instagram caption. "I know this project only captures some of one tour (out of all the other hundreds of shows and moments we have shared over the past six or seven years… jesus lol) but I just wanted to thank u all for showing me more in this lifetime already than I ever dreamed of."

Excuse Me, I Love You's release date corresponds with the final leg of Grande's tour in December 2019, which kicked off in March and spanned North America and Europe. Grande began teasing the concert film with some cryptic black-and-white Instagram posts last night.

The photos, which were archived stills from the tour, weren't paired with any captions. However, that didn't stop the "Thank U, Next" singer's fans from piecing the clues together. "SWEETENER WORLD TOUR MOVIE IS COMING," someone wrote in the comments. "NETFLIX," another person wrote. Still, the project came as a thrill to many people on Twitter. And yes, there were a lot of emotional reactions.

Unsurprisingly, there was also a ton of excitement to relive parts of the tour — especially since no one's seen a live concert in nearly a year.

If Grande releasing a concert movie right before Christmas proves anything, it's that the pop music icon is the gift that keeps on giving this year. In October, the singer released her sixth studio album Positions and dropped a very presidential music video for the record's lead single. A month later, she unveiled her Austin Powers-inspired video for "34+35," where she played both a seductive robot and a scientist.

With Excuse Me, I Love You, the singer is "switching positions" again and showing fans a side they rarely get to see. "Making music and doing all of this has been all I've known or fully given myself to consistently for a very long time now," she wrote in her Instagram post. "Although my heart is looking forward to a change of pace, I wanted to express again just how eternally thankful I am."

More like this
Lindsay Lohan & Jonathan Bennett Celebrated Mean Girls Day Very Differently
By Jake Viswanath
Everything You Need To Know About ‘Black Panther: Wakanda Forever’
By Bustle Editors
Twitter Is Freaking Out Over Rihanna’s 2023 Super Bowl Halftime Show Announcement
By Stephanie Topacio Long
Here’s Everything Coming To & Leaving Netflix In October
By Jake Viswanath
Get Even More From Bustle — Sign Up For The Newsletter