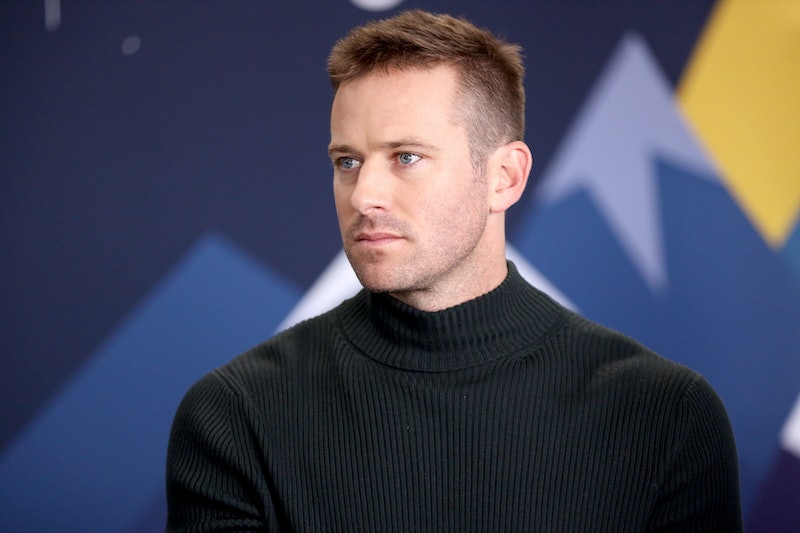 Trigger Warning: This piece contains mentions of prior allegations of sexual assault. Since early 2021, women have come forward with allegations against Armie Hamer — from a person named Effie’s claim that she’d been sexually assaulted by the Call Me By Your Name star to Courtney Vucekovich’s claim to Page Six that he wanted to “barbecue and eat” part of her body.

After the first social media claims against the actor surfaced that January — including alleged text screenshots that featured “graphic sexual fantasies, going as far as cannibalism,” per Variety — Hammer described them as “bullsh*t claims” and “spurious online attacks” in a statement. Since then, he’s tended to stay out of the public eye and was rumored to be working as a timeshare salesman in the Cayman Islands as of July, per TMZ.

Despite stepping away from Hollywood, Hammer’s allegations and storied family history will soon be the subject of a Discovery+ docuseries titled House of Hammer. Announced on Aug. 10, the new documentary, out Sept. 2, will explore the actor’s controversies through the lens of his aunt (Casey Hammer), Vucekovich, and other people connected to the actor.

The House of Hammer trailer includes an alleged voice memo from Hammer to Julia Morrison about “tying up and incapacitating” the recipient at her home. Vucekovich describes a similar experience. “He pushes your boundaries a little bit at a time,” she says in the trailer, before recalling an alleged incident in which she claims there were ropes around her wrists, neck, and ankles. “And you’re like, completely immobilized, and I’m just closing my eyes until it ended.”

Debauchery. Deceit. Abuse. Addiction. Corruption. Over the course of five generations, the men in the Hammer family have more secrets and scandals than any vault can contain. Armie Hammer’s alleged crimes are only the tip of the iceberg. Through a trove of archive and interviews from survivors and family members, the dark and twisted secrets of the Hammer family come to light. Behind the money and power lies a dysfunctional dynasty with its male characters exhibiting all the devastating consequences of privilege gone wild.

Hammer’s aunt, Casey Hammer, also participated in the docuseries, claiming that she was “not shocked” by the information about her nephew that surfaced. “If you believe about making deals with the devil, the Hammers are the top of the totem pole,” Casey explains in the trailer. “I’ve let the Hammers control me my whole life. It’s time to stop. I refuse to be silenced.”

The three-part documentary series is available on Discovery+ starting Sept. 2.

More like this
Where Is Armie Hammer’s Ex-Wife Elizabeth Chambers Now After 'House Of Hammer'?
By Grace Wehniainen and Radhika Menon
Kendall Jenner Thinks Tristan Thompson "Wanted To Trap" Khloé With Another Baby
By Jake Viswanath
Khloé Kardashian Debuts Baby Boy On 'The Kardashians' Season 2 Premiere
By Jake Viswanath
Shaina Explains Why Natalie’s 'Love Is Blind' Text Claims About Shayne Have “No Validity”
By Grace Wehniainen
Get Even More From Bustle — Sign Up For The Newsletter