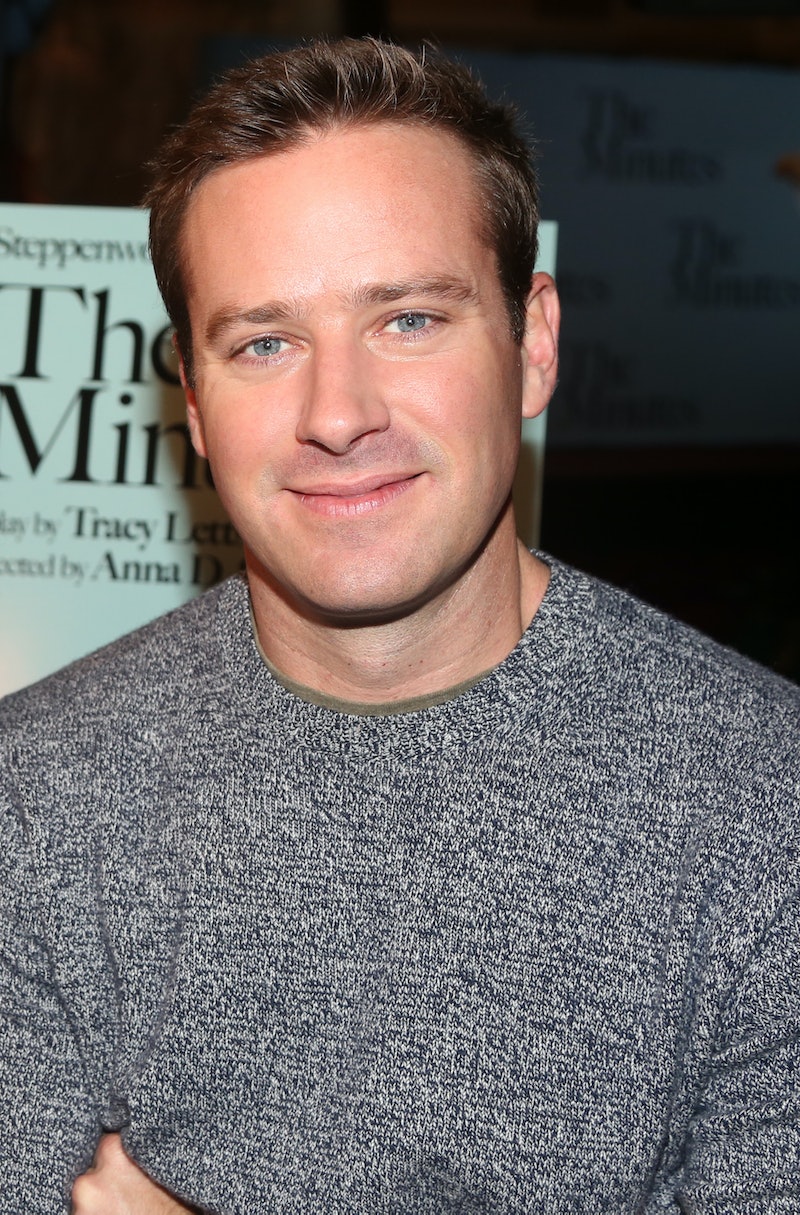 In the wake of disturbing allegations, Armie Hammer has been let go by his agency, WME, according to The Hollywood Reporter. The news comes as a cloud of scandal surrounds the 34-year-old Rebecca star; over the last several weeks, multiple women have accused him of sexual violence and manipulation. Hammer issued a statement in January, calling the allegations “bullsh*t” and saying he was the victim of “vicious and spurious online attacks.”

The claims came to light in January when the Instagram user House of Effie began sharing unverified screenshots of graphic messages, allegedly from Hammer to herself and other women, per The Sun. Many described violent acts and fantasies, including rape and cannibalism. As they gained attention, Hammer exited two projects, the Lionsgate action-comedy Shotgun Wedding and the Paramount+ series The Offer.

The loss of his agent shows the backlash isn’t dying down. Hammer’s personal publicist is no longer working with him, either, according to THR sources. Additionally, the actor’s ex-wife, Elizabeth Chambers, responded to the claims in an Instagram post on Feb. 1, writing that she “didn’t realize how much [she] didn’t know.” The TV personality, who split from Hammer in July after 10 years of marriage, also shared her support for “any victim of assault or abuse.”

While many of the claims against Hammer have been shared anonymously via social media, some of his exes have come forward to speak out publicly. Paige Lorenze, 22, called Hammer’s behavior “predatory” in a Feb. 3 tweet and alleged in January that he carved the letter “A” in her pubic region. “I kind of sat back and let it happen,” she told Page Six. “I didn’t really know what to do or say. … It’s disgusting that he coerces women into these situations. It’s dangerous.” (Hammer’s attorney denied the claims, saying, “These assertions about Mr. Hammer are patently untrue. Any interactions with this person, or any partner of his, were completely consensual in that they were fully discussed, agreed upon, and mutually participatory.”)

Another ex-girlfriend, Courtney Vucekovich, 30, told Page Six that he “grooms” the women he has relationships with “for these things that are darker and heavier and consuming.” She alleged that he was emotionally and physically abusive and put her “in some dangerous situations.” Following their relationship, she said she underwent treatment for PTSD and trauma.

A Feb. 4 Variety article reported that Hammer’s publicist and WME were taking a “wait and see” approach to the situation, based on conversations with sources, but that appears to have changed quickly. Both THR and Variety described his career as being in “freefall.” Other Hammer collaborators will soon have to decide what to do amid the allegations, including Disney, the studio behind his project Death on the Nile, which is due out in September.

More like this
Dakota Johnson Shocks With Armie Hammer Cannibalism Joke At Sundance
By Radhika Menon
Jennifer Coolidge Hunted For Jewels & Lashes In J.Lo’s Hotel Room
By Jake Viswanath
Keke Palmer Shares The Sex Of Her & Darius Jackson's Baby
By Jake Viswanath
Austin Butler Confirms Vanessa Hudgens Pushed Him To Do 'Elvis'
By Alyssa Lapid
Get Even More From Bustle — Sign Up For The Newsletter
From hair trends to relationship advice, our daily newsletter has everything you need to sound like a person who’s on TikTok, even if you aren’t.