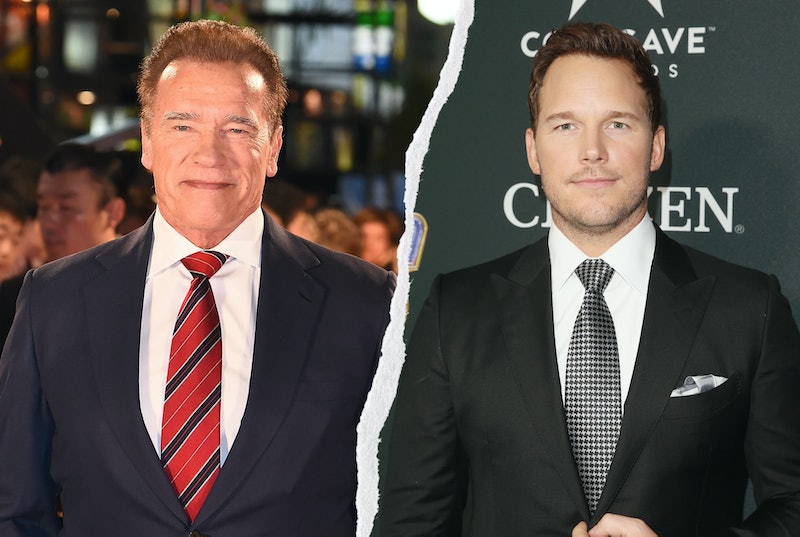 Arnold Schwarzenegger just offered a masterclass in trolling by purposely misidentifying his son-in-law Chris Pratt as Chris Evans on Instagram. Pratt recently hosted a star-studded telethon on the social media app to raise funds for hunger relief alongside charity platform Greater Good. Jamie Foxx, Tom Holland, and Robert Downey Jr. were among the guests, but Schwarzenegger managed to steal the show when he subtly acknowledged the ongoing Hollywood Chris discourse by calling the Guardians of the Galaxy star by the wrong name.

"Our next guest is Mr. Universe. He is the Terminator, the former governor of California," Pratt introduced Schwarzenegger. "He is my father-in-law and the grandfather to my daughter. I better not screw this up or I will be terminated." The former politician then tuned in and said, "Hello, Chris Evans. Oh, not Chris Evans, sorry. I'm going to screw up this thing right from the beginning. Chris Pratt. I didn't look at the cue cards. Sorry about that. I should know your name, I should know your name. That's for sure. You're my favorite son-in-law." Pratt then reminded him that he is, in fact, his only son-in-law. "I better be your favorite," he quipped.

Schwarzenegger's lighthearted shade comes after exhaustive discourse about who the best Chris in Hollywood is, with Chris Evans, Chris Hemsworth, and Chris Pine consistently thrown into the mix. Last month, Pine weighed in on the Chriscourse and even pitched a Comic-Con type of event for the various Chrises called a Chris-a-Con. "I feel like I'm the underdog right now," Pine joked while on Comedy Central's digital series Stir Crazy with Josh Horowitz. "Those damn Chrises, man. I just, it's either change my name or really just step it up."

All jokes aside, it's clear that Pratt reigns supreme as Schwarzenegger's favorite Chris. During a virtual Kindergarten Cop reunion last month, the Terminator actor said he never expected his daughter to wed a fellow actor, but gushed about Pratt nonetheless. "Chris is a fantastic guy and really easy to get along with," he said. "So I'm really happy because he has been such a really wonderful, wonderful husband to her and such a great son-in-law."

Pratt and Katherine wed in June 2019 after a year of dating. The pair welcomed their first child together, daughter Lyla Maria, in August 2020. Katherine announced the birth on Instagram and wrote, "We couldn’t be happier and we feel extremely blessed!"