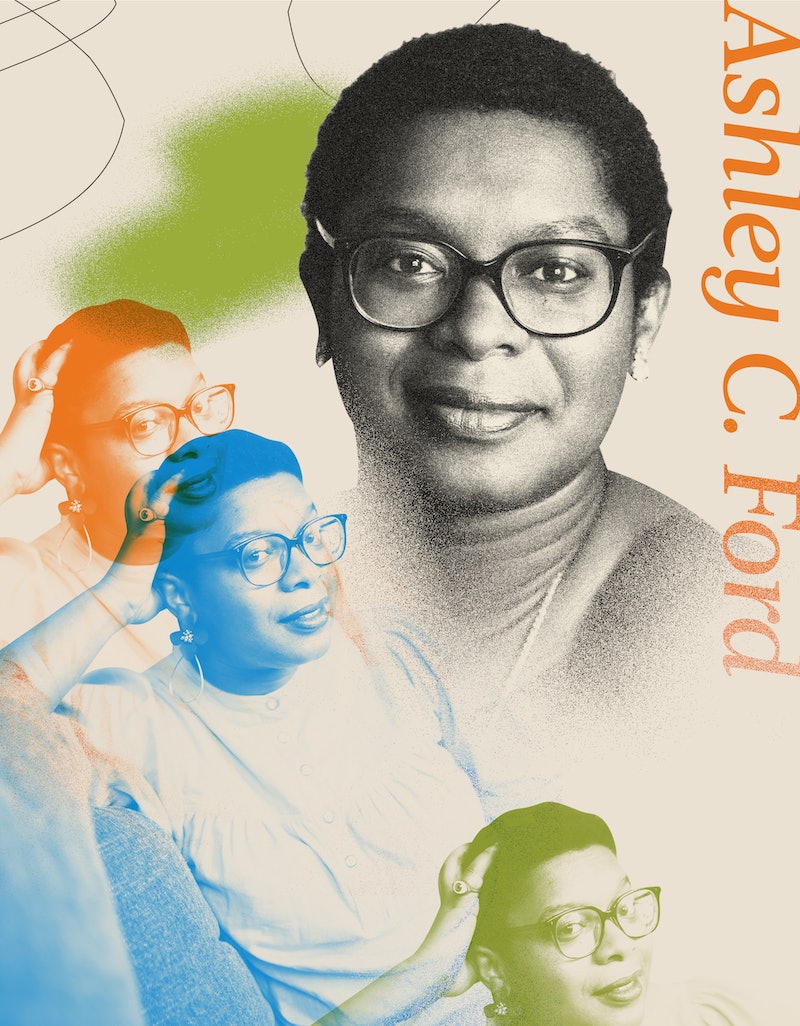 Ashley C. Ford is used to writing about other people’s lives. She’s built a career on it, penning celebrity profiles about Anne Hathaway and Missy Elliott and Serena Williams and many, many more. But as fascinating as she found her subjects, their stories were no more worthy than her own.

“When I was let into these people’s lives or homes or spaces in small ways, the one thing that I couldn’t deny was that they were all just people. And I’m just a person too,” Ford tells Bustle over Zoom. She’s sitting in the driver’s seat of a parked car, which seems like an apt metaphor for Ford’s youth — trying to steer while stuck in place. This struggle is the focus of Somebody’s Daughter, Ford’s new memoir about navigating adulthood while reconciling with her traumatic childhood.

The book is a labor of love that has been in the works for the last 10 years. While the synopsis on the book’s jacket focuses on two key figures in Ford’s life — her incarcerated father, whose crime remained a mystery for most of her life, and her abusive, temperamental mother — it’s ultimately a coming-of-age story about resilience. Without either parent by her side, either physically and metaphorically, Ford has become fiercely independent. It’s both a positive and a negative.

In Ford’s early years, her father was a “hard memory to hold onto”: he’d been imprisoned since before she could remember. Still, the “deep, enduring, irrevocable love” she felt was innate. When her grandmother — one of the few in Ford’s life to behave with her best interests at heart — unveiled the reality of her father’s crimes, the image she created of him was destroyed. “So many times I thought all the problems of my life could be solved if I’d just had him there to hold me and tell me who I am, and how much he loved that person. I never imagined pain coming from my father, or the mistakes he might have made as a present parent,” she writes in her memoir.

And yet, no one in Ford’s life is static. For all the negatives, there are sentimental moments, like the family movie marathons she treasured as a child, or her mother’s overwhelming support when it came time to apply for college. For those who grew up in abusive households, it can be difficult to accept the good in people when the bad is so pervasive. It certainly took Ford a while to get there.

“I thought anger was a terrible thing to feel, and anger and love couldn’t exist in the same place. I love my parents so much, but they have both done me harm, at different ends of the spectrum. And I’m angry about that,” Ford continues. “But all of those things can be true at the same time. Until I can fully accept that all those things can be true at the same time, I’m going to be holding myself back by cutting myself off from certain emotions. You can’t cut yourself off from one part of your humanity and have the rest of you thrive. You have to accept it all.”

Ford, now 34, is able to look back with more compassion for her parents’ faults. It’s been almost five years since her father’s release from prison, and their relationship grows each time they speak, or as often as Ford’s bandwidth allows (she’s not a daily, or even weekly, kind of talker — too independent for that). The same goes for her mother, though their relationship is more set in stone.

“It’s not really any different than it’s ever been. It’s fine, you know?” she says when asked about her mom. “She loves me and is proud of me, and she lets me know that. And that’s really the state of our relationship.”

Ford knew that publishing a candid book about her parents would not be easy for either of them, but she felt it was worth it — not only for her own sake, but also for those who have experienced similar circumstances. Having an incarcerated parent “is wrapped in so much shame,” Ford says, something she feels is glossed over in discussions about mass incarceration in the United States. The family, she says, is often the “collateral damage” of the person in prison or jail.

“Even now, you would be hard pressed to find a book from the perspective of a child who has an incarcerated parent. They exist, but they’re not really in circulation in a way you’d think a story like that would be, especially given how many incarcerated people there are and have been in this country,” Ford says. “I really believe there are so many people that are dealing or have dealt with the exact issues that I’ve written about in this book, and feeling like that story exists solely within them.”

There’s certainly an audience for Ford’s story. Somebody’s Daughter has spent three consecutive weeks on the New York Times Best Sellers List since its release. It’s even caught the attention of literary icons like Roxane Gay, who selected Ford’s memoir for her Audacity Book Club, and Oprah Winfrey, who tweeted in support of the book and later interviewed Ford. But Ford is taking all the attention in stride. To her, it’s proof that her story deserved to be told — and that some things are universal.

“I wanted to show that even in a hyper-specific story, we identify with this narrative because of our shared childhood experiences,” she says. “Whether or not we identify with all the circumstances, the emotions I felt in my childhood, about my body and the way I was treated and spoken to and spoken about ... most kids know those feelings.” In other words, we’re all somebody’s daughter.