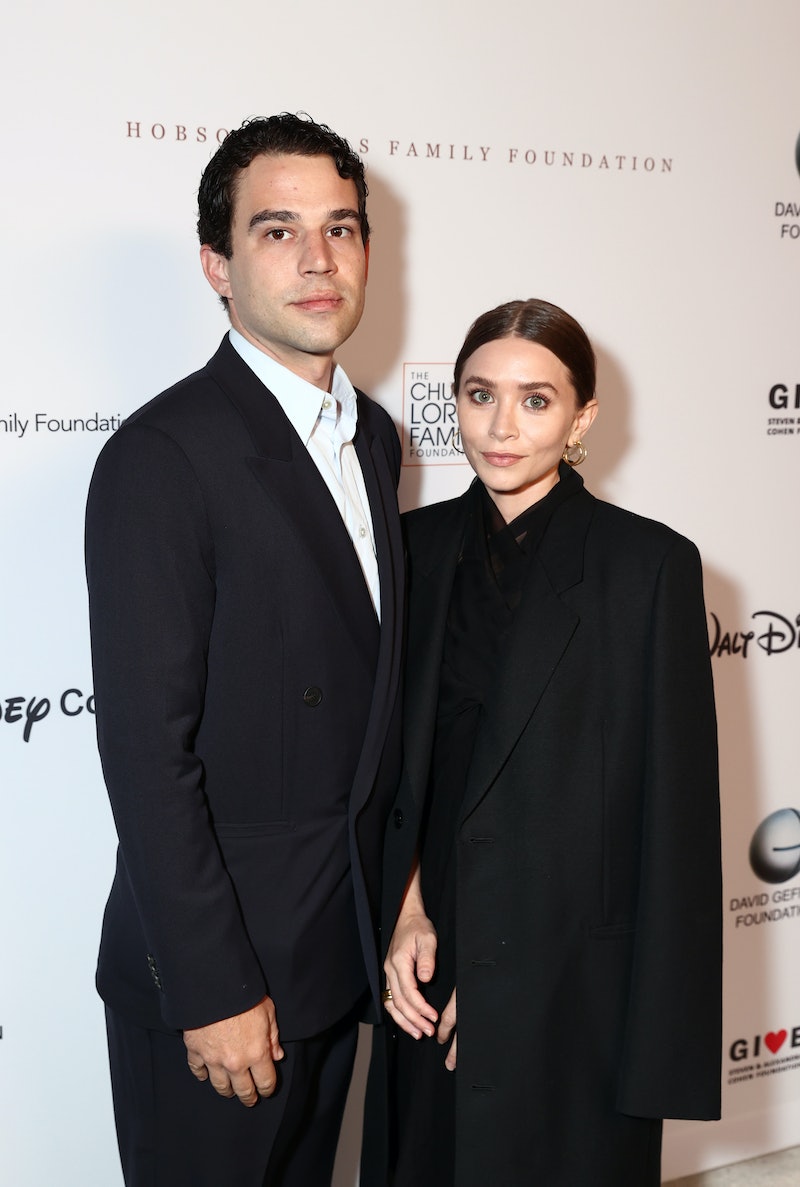 The Olsen twins are fully grown up. On Jan. 4, Page Six reported that Ashley Olsen secretly married Louis Eisner after five years of dating. The couple reportedly wed in a private ceremony at a Bel-Air home in Los Angeles on Dec. 28, in front of just 50 of their closest family and friends, including her famous sisters. However, the actor and fashion designer has yet to confirm her nuptials. Bustle has reached out to Olsen’s representative for comment but didn’t receive an immediate response.

On Jan. 9, People reported more details about their intimate wedding, with a source calling it “a small affair” but “perfect” for the newlyweds. Olsen’s twin sister Mary-Kate and younger sister Elizabeth Olsen were just two of the family members who attended the nuptials. “She is very close with her family. Louis is very close with his family too, and they were in attendance as well,” the source said. “For them, it was a perfect celebration. They never wanted a huge wedding.”

Olsen was first linked to Eisner, an artist and the son of jewelry designer Lisa Eisner, in October 2017. The couple sparked engagement rumors in 2019 after they stepped out on a dinner date, with a prominent dark band seen on Olsen’s left ring finger. While the couple has never commented on their relationship, Eisner shared a photo of Olsen on his Instagram Story in 2021, somewhat confirming the romance. But the most striking thing about the rare snapshot was the black machete that Olsen was holding as she walked through the woods with Eisner, drink in hand.

They made their red carpet debut together later that year, when Olsen supported Eisner at the YES 20th Anniversary Gala in Los Angeles, held in honor of a nonprofit organization founded by his father, attorney Eric Eisner.

Olsen and her sister Mary-Kate have not acted in any projects in more than a decade, instead focusing on their fashion house The Row, and have no social media presence, meaning they have been able to keep their relationships very low-key. Mary-Kate married Olivier Sarkozy in 2015 after three years of dating before filing for divorce in April 2020.

In a rare interview with i-D in June 2021, the twins gave some insight into why they prefer to keep their personal lives private and how that choice has even inspired their designs. “We were raised to be discreet people,” Mary-Kate said. “I think that potentially that’s just our aesthetic, our design preference,” Ashley added. “But that doesn’t mean that we don’t also appreciate something truly ornate or maximal.”

More like this
Hilary Duff's Husband Matthew Koma Has Her Name Tattooed On His Butt
By Jake Viswanath and Stephanie Downs
Pamela Anderson’s Dating & Marriage History Could Be Its Own TV Series
By Jake Viswanath
Britney Spears Shares & Deletes Photos Of Justin Timberlake From 22 Years Ago
By Jake Viswanath
Ashton Kutcher Wants Danny Masterson “To Be Found Innocent” In Rape Retrial
By Jake Viswanath
Get Even More From Bustle — Sign Up For The Newsletter
From hair trends to relationship advice, our daily newsletter has everything you need to sound like a person who’s on TikTok, even if you aren’t.

This article was originally published on Jan. 5, 2023