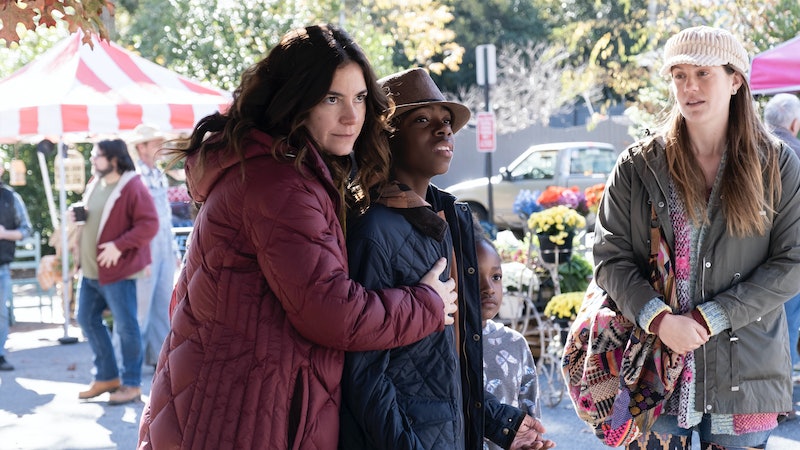 FX’s Atlanta launched into Season 3 with its first episode in nearly four years on March 24. Rather than immediately returning to Earn and Alfred’s quest to conquer the titular city’s rap scene, the premiere took a detour and explored a couple of tragically true stories. Aired as a two-part episode, the first half (“Three Slaps”) opened with a prologue about a haunted lake before centering on a young Black boy named Loquareeous, who’s sent to live with a questionable white foster family after his grandfather is seen physically disciplining him.

The story’s revealed as a vivid dream of Earn’s in the episode’s second half (“Sinterklaas is Coming to Town”), but the plot of Atlanta’s Season 3 premiere was based on two true instances. Georgia’s mysteriously dangerous Lake Lanier provided inspiration for the opening plotline, while the heart-wrenching viral story of Devonte Hart influenced the episode’s main focus.

“Three Slaps” opens with a scene featuring a white man and a Black man on a fishing trip at a mysterious lake supposedly haunted by members of the local Black community who were drowned as a result of a dam built by the government. After discussing a “self-governed Black town” now buried underneath the lake, the scene ends with many Black hands reaching out of the water and pulling the Black man into the lake. While the lake’s name isn’t mentioned in the episode, the story is strongly reminiscent of Georgia’s Lake Lanier, known as a frequent location of many unanswered, predominately Black deaths.

The 38,000-acre lake sits north of Atlanta and has long been rumored to be haunted by the Black town of Oscarville located beneath it, which was essentially eradicated by a government dam. According to reporting by Mic, some of the folklore — including aspects of its portrayal in Atlanta — is fictional, though the town’s overarching Forsyth County did experience a wave of white residents forcing out Black people.

In September 1912, an 18-year-old white Oscarville resident named Mae Crow was found injured, passed out in the woods, and reportedly raped before passing away mere weeks later. Back then, per Mic, the city was home to only 63 people and made up of mainly white residents. Authorities arrested four Black men for the crime, and while one of their charges were dropped, the remaining three (who were reportedly innocent, according to Oxford American) were subject to horrific public lynchings. Following another white woman’s supposed rape, the town’s white citizens committed horrific crimes against the 1,100 Black people living in Forsyth, driving out all but 23 Black residents from the area by 1920.

Lake Lanier was created in the 1950s, decades after most of the Black community left the area. According to the lake’s builders from the US Army Corp of Engineers, “the area was mostly farmland” when they purchased it to create the body of water. But while the lake may not have been built atop of a thriving Black community, some of the land was owned by Black residents who were either unable to sell their property or paid dismal rates for it before they were forced out of the town.

One of the characters in Atlanta alleges Black residents were drowned as the lake was created. Underwater Ghost Towns in North Georgia author Lisa M. Russell dispels the claim but believes there were likely Native American and African American bodies unknowingly buried underneath. “[Former Native American residents] had their ceremonial mounds just covered up with water. The Army Corps of Engineers will say there’s no graves under there,” she told Mic. “But, they didn’t have things like ground penetrating radars where you could find bodies. You couldn’t do that back then. African American slaves did not have burial [markers].”

Toward the end of the March 24 episode, two white women drive a car into the lake with their foster child in the back — we’ll get to that story shortly — and while that didn’t exactly happen as shown on Atlanta, the scene likely refers to another Lake Lanier story. Two women named Delia May Parker Young and Susie Roberts drove off a bridge and into the lake in 1958, and their remains weren’t discovered until 1990.

Horrific events continue plaguing the Lake Lanier area to this day, and every time something happens, people discuss its supposedly haunted nature. A reported 500 people have died at the location since its creation, per Oxford American, and just last year, a boat exploded on the lake and killed six people.

Following the Lake Lanier-inspired prologue, “Three Slaps” introduces viewers to a never-before-seen young Black character named Loquareeous, who awakens from a dream mid-school day and learns his teacher is taking their class to see Black Panther 2 on a field trip. After doing a celebratory dance on his desk, he’s sent to the principal’s office, and his mother and grandfather are called in. While getting scolded for his misbehavior, a white teacher witnesses Loquareeous’ family slap him three times in the hallway and swiftly calls child protective services.

He’s then sent to live in a foster home run by two white women named Amber and Gayle, who’ve already taken three other Black children into their stench-ridden home, where they serve them nasty meals like microwaved “fried” chicken and make them bathe using their hands instead of washcloths. The foster mothers rename him “Larry,” make him wear a fedora, and take him to a farmer’s market to hold a “Free Hugs” sign in public. Sick of his new lifestyle, Laquareeous runs to a police officer at the market and hugs him while exclaiming, “I learned my lesson! I hate my new parents!”

While the Atlanta storyline is a bit fictionalized, it’s eerily reminiscent of Devonte Hart’s viral and devastating real-life story. According to reporting by GQ, Devonte and three of his siblings entered foster care after they were taken from their mother and a paternal aunt they subsequently lived with. The four Black children were sent to live with foster parents Jennifer and Sarah Hart in 2009 despite several allegations of misconduct previously filed against the two white women, which they avoided by moving across state lines.

A photo of a teary-eyed 12-year-old Devonte hugging a police officer at an early Black Lives Matter rally in Ferguson, Missouri, went viral in 2014, with Portland Sgt. Bret Barnum claiming the child approached him “not as a police officer but just a human being.” While it was shared by several news outlets as a moment of unity between the Black community and police officers amid an otherwise turbulent time, many believe the hug was likely a cry for help, as portrayed in Atlanta.

After years of reported abuse and food denial from Jennifer and Sarah, per Oregon Live, the foster parents were found dead on March 26, 2018, after seemingly driving their SUV off a 100-foot cliff. Five bodies were found nearby — including Devonte’s three siblings and two of their other foster siblings — but Devonte’s remains were never recovered, and he was declared dead at 15 in April 2019.

The episode takes a different approach to the story’s ending, with Loquareeous standing by as the car launches off the cliff and into the aforementioned mysterious and haunted lake. “We just wanted to make a Black fairytale,” series creator and star Donald Glover recently told Variety. “I remember sitting in the writers’ room and being like, ‘What do we write about?’ We just wanted to do short stories. Something I would want to watch.”

More like this
'The Crown' Season 6 Has Suspended Filming "Out Of Respect" For The Queen's Death
By Bustle Staff
Linda Ronstadt’s “Long Long Time” Plays A Pivotal Role In The Last Of Us
By Brad Witter
Michael B. Jordan Tackled His "Public Breakup" With Lori Harvey On 'SNL'
By Brad Witter
Here’s What Happens To Bill & Frank In 'The Last Of Us' Video Game
By Brad Witter
Get Even More From Bustle — Sign Up For The Newsletter
From hair trends to relationship advice, our daily newsletter has everything you need to sound like a person who’s on TikTok, even if you aren’t.