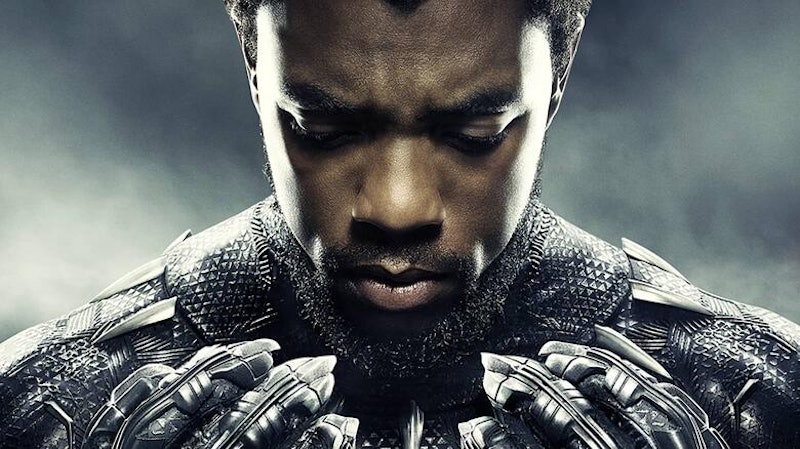 On May 3, Marvel Studios announced details for several of its upcoming films, including the highly-anticipated Black Panther 2, officially titled Black Panther: Wakanda Forever. Like several other Hollywood productions, the Marvel sequel was delayed due to the pandemic. And sadly, last year also meant the loss of Chadwick Boseman (King T'Challa), who died of colon cancer in August 2020. It is still unclear how the film will move forward without Boseman, but with a host of character’s returning for the sequel, and stars like Michaela Coel joining the ranks, the Black Panther follow up is in good hands. Here's what audiences can expect once Black Panther: Wakanda Forever hits theaters. Be warned: Spoilers for the first movie ahead.

At the end of the first film, T'Challa was able to return to "The Golden City." There, he challenged Erik Killmonger (Michael B. Jordan), who assumed the throne after he beat T'Challa in a previous showdown. During their epic final fight across Wakanda, a wounded Killmonger told T'Challa that he'd rather die and be buried in the ocean with his "ancestors that jumped from the ships because they knew death was better than bondage."

In the following scene, T'Challa kissed Nakia (Lupita Nyong'o) and asked her to stay in Wakanda, suggesting the next installment would further explore their relationship. And the very last scene before the end credits showed T'Challa and Shuri (Letitia Wright) in California, where he said they would bring Wakanda's advanced technology and innovations to America via the Wakandan International Outreach Center.

Of course, when that movie was made, Boseman was expected to return to the big screen, and the plot would continue from there. Ryan Coogler, the first film's writer and director, previously told Screen Rant he wanted to explore "what kind of king he is with experience and how that affects his performance in the stories." However, things obviously must change.

While Marvel has not yet given specifics on how they will maneuver the tragic loss of Boseman, there are some hints at how the script will take shape. On Dec. 10, 2020, Marvel Studios President Kevin Feige announced that they won't recast T'Challa. "[Boseman's] portrayal of T'Challa the Black Panther is iconic and transcends any iteration of the character in any other medium from Marvel's past, and it's for that reason that we will not recast the character,” he said. “However, to honor the legacy that Chad helped us build, we want to continue to explore the world of Wakanda and all the rich and varied characters introduced in the first film."

That doesn't necessarily answer how they will address T'Challa's absence, but it does confirm fans will see more of the characters they know and love from the first movie. With Killmonger seemingly dead (more on that down below), there's also room for a new villain. Per The Hollywood Reporter, that role could go to Narcos: Mexico star Tenoch Huerta, who is said to be in talks to join the franchise.

Michaela Coel is the latest name to join the Black Panther: Wakanda Forever cast, reports suggest. According to Variety, the Chewing Gum and Black Mirror actress came onto Hollywood’s radar after she wrote, co-produced, directed, and starred in the Emmy nominated HBO Max drama I May Destroy You. While we still don’t have any information about her character, Coel has reportedly already joined the cast and crew at Pinewood Studios in Atlanta, Georgia, where production on Wakanda Forever began last month.

"There's only one Chadwick and he's not with us. Our king, unfortunately, has died in real life, not just in fiction, and we are taking a little time to see how we return to history and what we do to honor this chapter of what has happened to us that was so unexpected, so painful, so terrible, really ... The thought of doing it without him is kinda strange. We're just grieving at the moment, so it's trying to find the light in the midst of it."

Confirming his return for the Black Panther sequel, Winston Duke admitted that it was emotional working on the movie following the death of Boseman. “It was very emotional to read the script,” he told Collider. “It was emotional to pack to go back to set. But we're all a bit of a family now and we grieve together, and we're making something really special.”

Surprisingly, there are rumors that Jordan could return despite his character, Killmonger, refusing medical help and appearing to die in the previous film. He may only appear in flashbacks or the spiritual realm of Bast, as he ingested the heart-shaped herb, but Marvel hasn't confirmed anything regarding casting news.

On April 30, Jordan teased his possible return to the Black Panther series in an interview with Sirius XM. When asked how likely he is to reprise the role of Killmonger on a scale of one to ten — ten being most likely — he said, “I'm gonna go with a solid 2.” With a laugh, he clarified his answer: “I didn't want to go zero! Never say never. I can't predict the future.”

In the same interview, Jordan also offered fans some insight on how Marvel will be moving forward without Boseman. “I honestly don't know much at all,” the actor said. “All I know is they're developing a script that is a reflection of a lot of circumstances and tragedy that we had to deal with this past year.” He continued, “I know Ryan [Coogler] and Marvel are going to do the absolute best job at developing the story in a way that makes everybody happy and satisfied and honors Chad and moves forward with grace.”

Speaking to Yahoo! Entertainment for an interview published on April 28, Nyong’o also opened up about her feelings towards returning to the Marvel franchise following Boseman’s passing.

“People will ask me, ‘Are you excited to go back?’ Excitement isn’t the word. I feel like I’m in a very pensive and meditative state when it comes to Black Panther 2. His passing is still extremely raw for me,” detailed the actress. “And I can’t even begin to imagine what it will be like to step on set and not have him there.”

However, similarly to Jordan, the actress places her trust in the Marvel team:

“But at the same time we have a leader in Ryan, who feels very much like we do, who feels the loss in a very, very real way as well. And his idea, the way which he has reshaped the second movie is so respectful of the loss we’ve all experienced as a cast and as a world. So it feels spiritually and emotionally correct to do this. And hopefully, what I do look forward to, is getting back together and honoring what he started with us and holding his light through it. Because he left us a lot of light that we’re still going to be bathing in. I know that for sure.”

The soundtrack for the first film was produced and curated by Kendrick Lamar alongside record label honcho Anthony "Top Dawg" Tiffith and became an immediate success. Not much has been said about if they will return to develop the second album, but there are rumors Rihanna may be involved after she appeared in a Google search with the Black Panther 2 cast. E! dispelled rumors that she would star onscreen, but there's still hope she may have some involvement with bringing the movie to life with music.

In August 2019, Feige said the sequel would premiere in theaters on May 6, 2022, but that was before the pandemic and Boseman's death. Because the initial 2021 production date was pushed back five months, the Black Panther 2 release date was then delayed to July 2022, which Feige confirmed in December 2020. On May 3, Marvel Studios announced that Black Panther: Wakanda Forever will hit theaters on July 8, 2022.