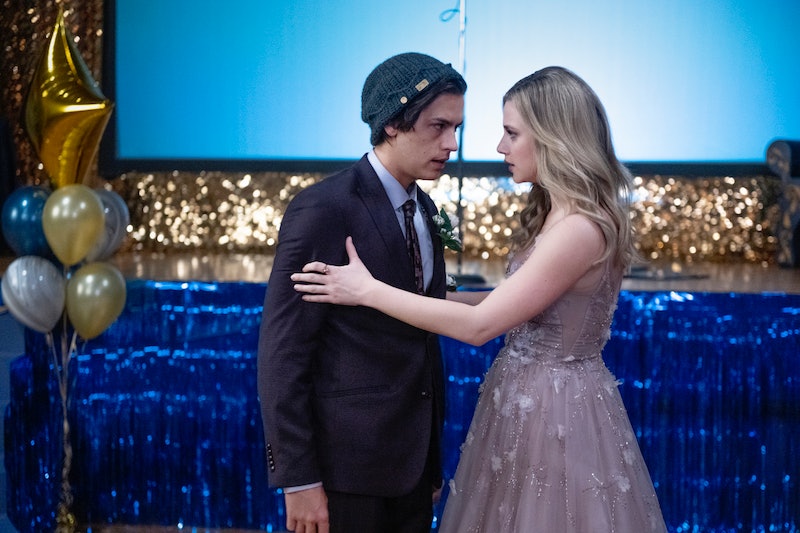 Spoilers ahead for the Season 5 premiere of Riverdale. The antagonist sending creepy videos to Archie and his friends on Riverdale finally has a name: the auteur. First introduced in Season 4, the mysterious figure started by sending Archie and co. odd videos that were just hours of recorded footage from outside their homes. Things have since escalated, with the auteur reenacting previous Riverdale murders as well as hinting at others — like staging the potential murder of video store owner David.

That seemingly rules out the Core Four's theory that David was the one sending the tapes. But fans have plenty of other theories about who the Auteur could be. Let's explore.

Charles is the Auteur

Betty and Jughead's FBI agent half-brother has been helping them investigate who's sending the videos, which also puts him in a prime position to be distributing them himself. He's privy to all the teens' leads and theories, and he could be using that information to their detriment. That's not to mention the fact that unbeknownst to anyone, Charles is dating Chic, the latter of whom previously tried to scam the Cooper family into believing that he was Alice Cooper's long lost son. When Charles visited Chic in Season 4, the two seemed to be planning to take down the Cooper family from the inside, and this is one way to do that.

David is the Auteur

Betty, Jughead, and Charles currently suspect David, since he owns the Riverdale video store and sets up underground film screenings of mature content similar to what's been featured in the auteur's tapes. At the end of the Season 5 premiere, the auteur released a video showing a guy in a David mask being murdered by people dressed like the Riverdale students, but perhaps he was just faking his death to temper suspicion.

Bret is the Auteur

He may be in prison now, but it's not impossible that Bret is using some Stonewall Prep minions to carry out his dirty work. Bret was already into the VHS medium, having recorded illicit sex tapes of people including Jughead and Betty, so there's no reason to believe he's not also capable of the auteur's work.

Jellybean is the Auteur

One of the most promising theories arising amongst Riverdale fans is that Jellybean is the auteur. Jughead's little sister is often ignored or left out by the Riverdale High seniors, so maybe she's channeled her anger about that into these videos. She's hiding in plain sight and has access to all kinds of information about Betty, Jughead, and their friends by virtue of living with the Coopers. She was also spotted at the auteur's film screening, and while she told Jughead that she was just there for the party, she may have been there as the filmmaker.

The Black Hood is the Auteur

OK, technically the Black Hood is dead, but is anyone ever truly dead on Riverdale? The Black Hood came up twice in the Season 5 premiere. Once because Betty played some home videos of him being manipulated by his mother as a child and the second time because Archie got a taped reenactment of the time the Black Hood shot his dad. The details in the reenactment were spot on — right down to the bandage Archie had on his hand — and no one was in Pop's Diner that night except for Archie, his dad, and the Black Hood. (OK, Pop Tate was also there, but I refuse to believe he could be the auteur. Although he is around all the time...)

Whoever it is, we'll likely know the answer soon. Only the first few episodes of Season 5 are set in the present; afterwards, Riverdale will jump ahead seven years. And this crew would never let a mystery go unsolved that long.

More like this
We Finally Have Some Answers To How Heather Gay Got A Black Eye On 'RHOSLC'
By Samantha Rollins
The Plane Crash In 'Dear Edward' Is Based On A 2010 Tragedy
By Grace Wehniainen
This 'One Tree Hill' Wardrobe Error Is Going Viral On TikTok
By Brad Witter
A 'Terminal List' Sequel & Spinoff Are Reportedly In The Works
By Kadin Burnett and Grace Wehniainen
Get Even More From Bustle — Sign Up For The Newsletter
From hair trends to relationship advice, our daily newsletter has everything you need to sound like a person who’s on TikTok, even if you aren’t.