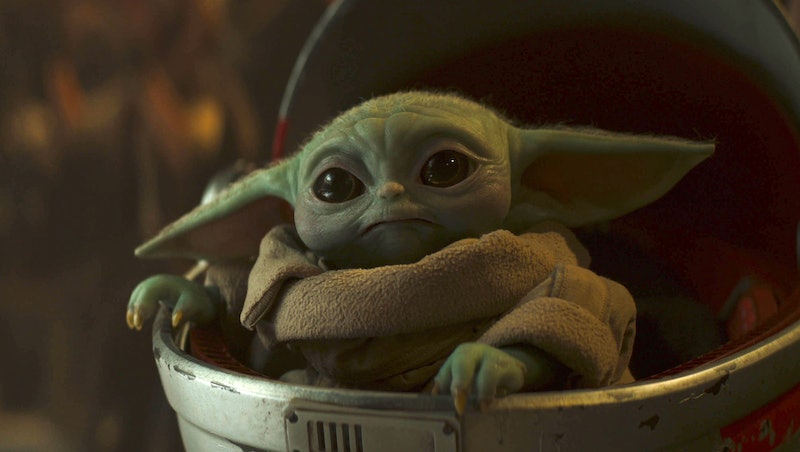 He may be a bona fide internet phenomenon, but we really don't know that much about Baby Yoda. The Mandalorian's first season filled in a few vague details (for one, we know he has the powers of the Force), but beyond the fact that he's the cutest soup-drinker around, there are still a lot of unanswered questions about The Child. The Mandalorian Season 2 promises to explore his origins further, with the Armorer telling Mando that he needs to unite Baby Yoda with the Jedi. But here's a breakdown of everything we do (and don't) know so far.

What is Baby Yoda's Real Name?

"Baby Yoda" is a misnomer granted to the character by the internet, and for a while Disney's official name for him was "the Child." In Season 2, though, former Jedi apprentice Ahsoka Tano finally revealed his real name: Grogu.

"The name has been around for a while, writer-director Dave Filoni explained to Vanity Fair. "Jon [Favreau] told me early on in Season 1 what it would be, which made me start to think about how people could learn the name. This gave me the idea that Ahsoka, who is very compassionate, would be able to connect with the Child."

Who Are Baby Yoda's Parents?

When Grogu floated onscreen last year, everyone had to puzzle over the disturbing implication that maybe the wizened Yoda had sex. He's extremely Force-sensitive, so it would make sense if he was Yoda's son, but we've only met two other members of his species — Yoda and Yaddle, both Jedi. It would be a bit too convenient for them to all be related, but we know the species is likely endangered; otherwise, Moff Gideon would not be so desperate to capture him.

Mandalorian has already confirmed that Grogu is not a Yoda clone. And even though it's unlikely Grogu is Yoda's son, fans are pretty sure Yoda at least knew about Grogu, since Ahsoka revealed that Grogu was trained at the Jedi Temple at Coruscant. "I think Yoda was 1000% aware of Grogu's existence, and almost definitely would have shared some form of special bond or connection with him, considering the rarity and importance of their species," wrote one Reddit user. "I wouldn't be surprised if Yoda or Yaddle were the ones responsible for bringing Grogu to the Temple in the first place."

Who Snuck Baby Yoda Away from the Temple?

Ahsoka told Mando that Grogu trained for many years at the temple, up until the Great Jedi Purge. During the siege of the temple, somebody hid Grogu, which is why he wasn't killed by Darth Vader like the rest of the kids. It's unclear who helped Grogu escape, but one popular fan theory is that it was Samuel L. Jackson's Mace Windu.

How Powerful is Baby Yoda?

It's not entirely clear if The Child is exceptionally gifted or if everyone in his species is just Force-sensitive from a young age. But within the wider Star Wars universe, he appears to be pretty powerful. Despite being a toddler, he can already Force-lift mudhorns, choke people, and heal wounds. As noted by ScreenRant, being able to Force-heal is a technique that not even Anakin Skywalker had mastered, and both Rey and Kylo Ren are only able to use it in the final film of the sequel trilogy.

Will Baby Yoda Become a Jedi?

Even though the show is called The Mandalorian, it does feel like it's building towards Grogu eventually embracing his Force powers thanks to a Jedi teacher. Mando has already met Ahsoka Tano, and now they're heading to the planet Tython to reach out to yet another Jedi. But as Ahsoka pointed out, there aren't that many of them left to train Grogu. The Mandalorian takes place after Darth Vader is killed but before Rey is even born, and at this point most people think the Jedi are just a myth.

Who Will Mentor Baby Yoda?

Fearing that Grogu's emotional attachment to Mando could one day turn him evil, Ahsoka refused to train him. But Mando's journey to Tython's sitting stone suggests we may see a new Jedi teacher by season's end. Many fans are theorizing that Luke Skywalker could possibly appear, while others have suggested Ezra Bridger from Star Wars Rebels.

Does Baby Yoda have a dark side?

It doesn't take much for a baby to throw a temper tantrum, but there was a moment in Season 1 where Grogu actually became genuinely dangerous to Mando's crew. In Episode 7, Mando and Cara Dune were arm-wrestling for fun when Grogu suddenly used his powers to Force-choke Cara. Mando instantly put a stop to it, but it suggests that if Grogu isn't trained properly, he could hurt someone. It seems like Ahsoka's fears aren't totally unfounded after all.

Why Does the Empire Want Baby Yoda's blood?

The fallen Empire clearly wants Grogu for nefarious reasons, and in the last few episodes we got a glimpse of their projects. Reddit user Bag_Guy theorized that they're using Grogu's blood to create Force-sensitive soldiers, and that they'll wear the black Stormtrooper outfits. Others theorized that the strange experiments we saw in Episode 12 are attempts to create clones using Grogu's blood; eventually, those clones could become Snoke and the Palpatine copy, both antagonists in the recent film trilogy.

Yoda's "backwards" way of talking is one of his most famous characteristics, and Yoda's puppeteer Frank Oz told BBC in 2011 that it's a cultural marker of the species. According to Inverse, Yaddle also spoke similarly in the non-canonical comics. If Grogu is raised by Mando or Ahsoka, does that mean he'll sound like a Mandalorian instead? He's already 50 years old and still talks in gibberish, so it's possible we'll never hear him talk on The Mandalorian, but it's still an amusing prospect to think about.

Seriously, the floating pod is a part of Grogu's character at this point. Is he somehow piloting it with his feet? Does it just float and open with its own technology? Or has Grogu been controlling it the whole time with the Force? If that's the case, maybe we need to reassess how strong Grogu really is.

More like this
'RHOSLC' Star Jen Shah Refuses To Do A Post-Sentencing Interview With Andy Cohen
By Brad Witter and Jake Viswanath
'The Crown' Season 6 Has Suspended Filming "Out Of Respect" For The Queen's Death
By Bustle Staff
9 Time Catherine Cawood Was An Absolute Badass In Happy Valley
By Sophie McEvoy
'GoT' Star Emilia Clarke Says She "Just Can't" Watch 'House Of The Dragon'
By Brad Witter
Get Even More From Bustle — Sign Up For The Newsletter
From hair trends to relationship advice, our daily newsletter has everything you need to sound like a person who’s on TikTok, even if you aren’t.