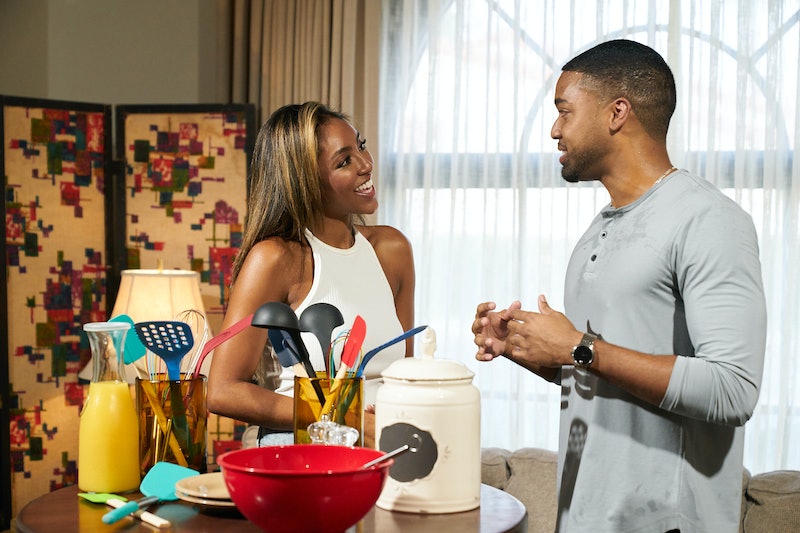 Sorry to break it to Peter Weber's infamous mom Barbara, but she's officially been upstaged by... every parent on Tayshia Adams' season of The Bachelorette. Adams just finished her quarantine-friendly hometown dates, and Bachelor Nation was so impressed by the friendliness and authenticity of all of the guys' families — particularly Ivan's.

To accommodate the La Quinta "bubble," the families traveled to Palm Springs, quarantined, and visited with Tayshia and their respective family members within the confines of the resort. Typically, during hometowns, at least one family is problematic or causes drama in some way, but that didn’t happen this time around. Other than some typical skepticism about the show’s fast pace, everyone was refreshingly optimistic.

Oh, and there were a lot of happy tears. Brendan got teary-eyed at the sight of his brother, who became like a father figure to him after his dad’s death, and Zac flashed smiles more genuine than his family had ever seen. When it came to Ivan's family visit, he was understandably emotional when he got to see his brother, whom he thought couldn't make it. Though Ben said he can't cry, he did enjoy the time with his sister, whom he called “the most important person” in his life. The only criticism *some* people had was for Zac's family because his dad hit Tayshia with a hard question ("How does your relationship with Zac compare to the other three guys?"), and the night didn't flow 100% perfectly.

And let's not forget that all of this happened under the added stress of a pandemic. Ivan's dad, who's in two risk categories as an older person with preexisting health conditions, safely made the trip to make Ivan happy and had nothing but nice things to say about Tayshia. If Barbara got loads of memes and GIFs, this man deserves a million plus a ton of clapping emojis. So, internet — do your thing.