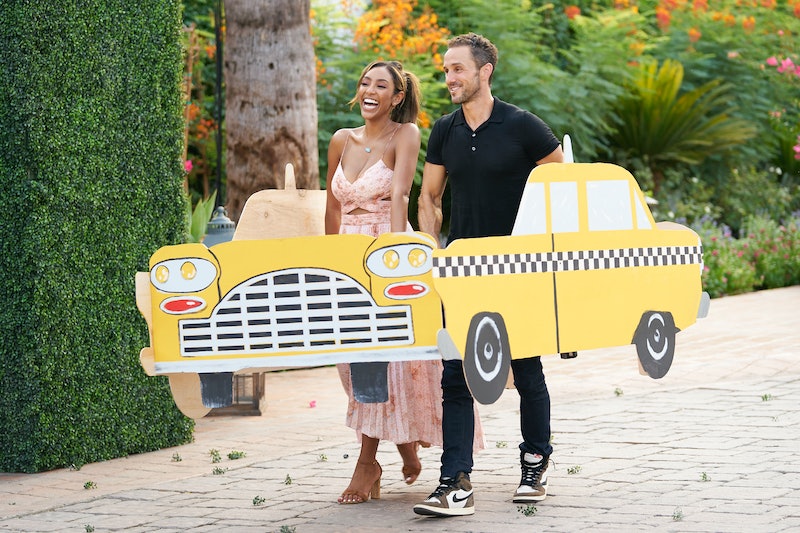 The pandemic has affected the newest season of The Bachelorette in many ways, but it was the hometown dates that really emphasized how different things are this time around. Bachelorette fans shared a lot of thoughts about Tayshia's hometown dates on social media tonight, and opinions seemed to be split between those who appreciated all of the effort and those who couldn't help but laugh at the "homemade" versions of Brendan, Zac, Ivan and Ben's hometowns.

After all, this is a show that prides itself on grand, romantic trips around the world, so to see them playing "Swish-A-Roo" at an improvised carnival and carrying plywood taxis around "New York City" was a little goofy. First up was Brendan, who played carnival games with Tayshia and his niece. While the concept was fun, the cobbled-together ring toss and bounce house couldn't quite compete with some of the franchise's most elaborate dates. And then there was Zac, whose backlot-inspired date reminded plenty of viewers of Ted Mosby's infamous "two-minute date" from How I Met Your Mother — even while they were busy poking fun at that "taxi cab."

Of course, despite the less-than-glamorous circumstances that these particular "hometown" dates took place under, the actual meetings with everyone's families were some of the most emotional and supportive in Bachelorette history. In addition to seeing Tayshia bond with Brendan's niece, fans also got to see him tell his older brother how much he loved him. During that time, his sister-in-law and Tayshia spoke about the aftermath of divorce. (This season is truly all about emotional maturity.)

Then, Zac and his mother spoke candidly about his addiction, and Ivan and his family talked about how much they all love and care for one another. By the time Ivan's younger brother, Gabe, made a surprise appearance, fans were basically emotionally shattered — and then Ben's sister showed up. Ben may not cry often, but everyone watching at home was so touched by the genuine emotion shown on these hometown dates that they cried more than enough tears for him.

Seriously, who needs a private helicopter ride when you can reunite brothers and have handsome men openly talk about their feelings as they bake under the hot desert sun? The hometown dates on Tayshia's season may have been less impressive than many other romantic moments, but there was genuine emotion, high stakes, and plenty of kind, loving parents to make up for it.