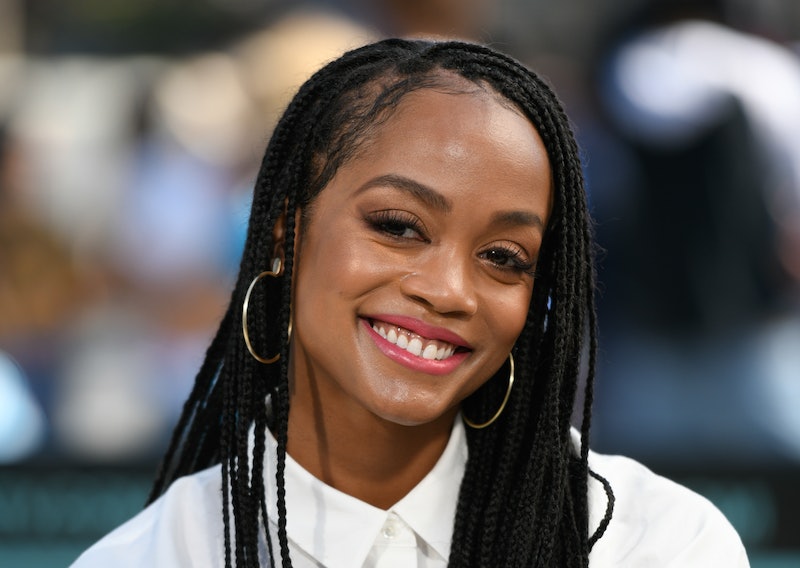 Though still very much a part of Bachelor Nation, Rachel Lindsay has never been shy about calling the franchise out. So you best believe she has thoughts about the Rachael Kirkconnell scandal. "I have absolutely seen [them]," the former Bachelorette tells Bustle of the various claims circulating around TikTok, including that Kirkconnell liked racist social media posts and once bullied a peer in high school for dating Black men. (Bustle reached out to ABC but did not receive a response).

Lindsay says she hasn't yet spoken about the controversy because there's a good chance Kirkconnell will be a guest on her Bachelor Happy Hour podcast, on which she regularly interviews contestants from the show. But she promises she will "100% address it" when the time comes. "There's no way I'm going to be soft," Lindsay says. "I can guarantee you I have questions based on what I've seen, and I will be asking those questions."

Lindsay, who also co- hosts MTV's Ghosted, went through a similar experience during her Bachelorette season with contestant Lee Garrett after a number of racist and sexist tweets allegedly sent from his account surfaced online. But Lindsay notes that Garrett didn't make it very far into her season, while Kirkconnell has been rumored to be a frontrunner for Matt. "We don't know how far Rachael makes it. [But] we know that Matt really is into her and told her he's falling in love with her," she says. "[So] the fact that this information is out there, whether it's true or not, it needs to be addressed for Matt's sake."

Matt, for his part, recently told Entertainment Tonight that he wants to caution people about "believ[ing] everything they see and hear on the internet" until Kirkconnell has had a chance to address the claims directly. In the meantime, Lindsay says she trusts Matt to make the right choices for himself throughout the rest of his season — regardless of what other people have to say.

"[Before the show] I told him ... it's going to be hard at times because you're going to want to please people in this situation, but you have to do what's best for you at the end of the day," she says when asked about the pressure they both faced to choose a Black winner. "Just because he may pick somebody who doesn't look like him doesn't mean he loses himself in the process. He's still a Black man, he's still the first [Black Bachelor], and representation still matters."

Catch Lindsay next on Ghosted, which will air five new episodes beginning Feb. 8 as part of the network's "Love Gone Wrong" week.