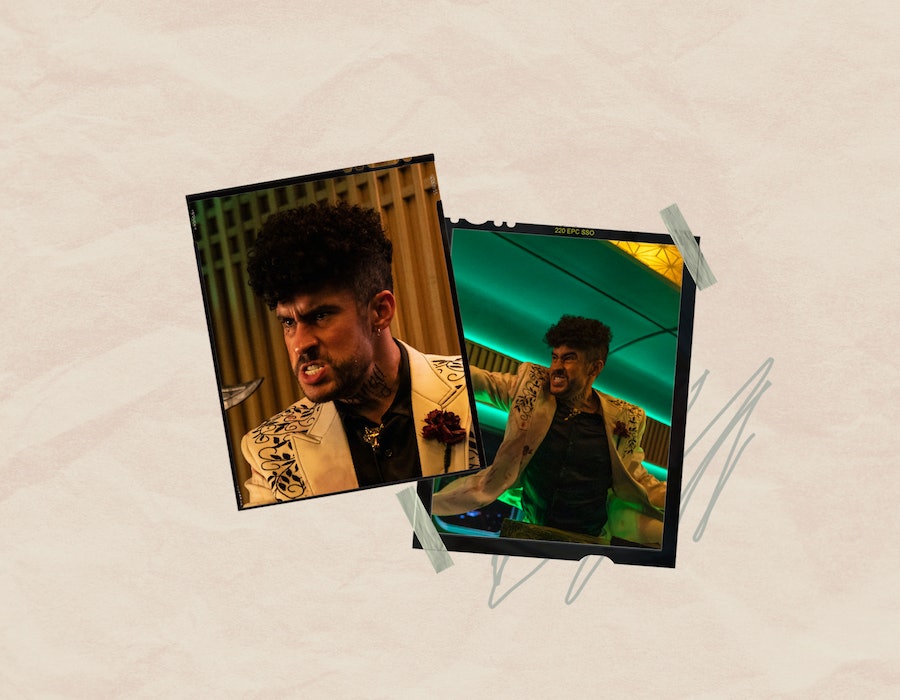 David Leitch’s Bullet Train is based on Kōtarō Isaka’s novel Maria Beetle (マリアビートル), which is, as Booklist writes, “a twisty, darkly hilarious game of musical chairs that draws out the train's hidden army of assassins and a strong dose of Machiavellian justice.” Bullet Train is kind of that, but bad: It strips away Isaka’s dark wit and wry philosophical banter in favor of gratuitous violence and banal gay jokes. Also, it’s boring; despite taking place on a high speed Hayate train from Tokyo to Kyoto, the movie doesn’t really go anywhere, as many critics have noted. The only thing that kept me from lobotomizing myself in the theater was the thought of confirmed zaddy and erstwhile drag legend Bad Bunny — yes, this guy — gracing the screen for two-plus hours... so imagine my surprise when Bad Bunny’s character accidentally kills himself less than 10 minutes after he appears.

Bad Bunny — again, this guy — plays The Wolf, a Mexican assassin seeking revenge for the gruesome murder of his new wife (and their wedding guests) at his nuptials. He thinks Brad Pitt’s character had something to do with it — which he did, sort of — so the minute he sees Pitt, The Wolf pounces. After an intense (and brief) fracas, The Wolf throws a dagger at Pitt, only for it to ricochet off of Pitt’s metal briefcase and pierce The Wolf through the heart.

I felt that dagger through my heart, too.

This quick death is upsetting — nay, indefensibly criminal — because Bad Bunny is very hot and talented. And hot. I mean, who else has a face that’s as delicate and tender as it is rugged and brooding? Who else has lips so plump and supple, cakes so firm and perky? Only Bad Bunny. (Don’t believe me? Name another guy with the power to re-appropriate rimless spectacles from Republican legislators. I’ll wait.)

If it seems like I’m objectifying him, that’s because I am. But the real problem here isn’t my tactless thirst; it’s the gross dismissal of Bad Bunny’s hotness in Bullet Train. The film claims to be about justice, but it clearly misunderstands its subject: true justice, as we all know, is on the side of hot people. So if my logic is correct, *checks notes*... Bad Bunny is hot. And justice favors hotness by letting hot people win. Therefore, Bad Bunny, the hottest person in Bullet Train, should’ve been the last one standing — not one of the first to go.

Hope isn’t lost, though. Hollywood still has an opportunity to rectify this fatal error when Bad Bunny stars as the titular superhero in Marvel’s El Muerto. It’s thanks to this casting that I — for the first time ever — am excited to see an MCU flick. So to Marvel filmmakers, if you’re reading this, I implore you: don’t kill him while my popcorn is still full. Superhero deaths are a hot gag these days, but Bad Bunny is hotter.

More like this
The Trailer For The Whitney Houston Biopic Has Twitter Feeling Heated
By Radhika Menon
Harry Styles’ Red Carpet Looks Have One Thing In Common
By El Hunt
Everything To Know About Taylor Swift’s 10th Studio Album, 'Midnights'
By Grace Wehniainen and Jake Viswanath
Lizzo Twerks While Playing James Madison's 200-Year-Old Crystal Flute Onstage
By Radhika Menon
Get Even More From Bustle — Sign Up For The Newsletter