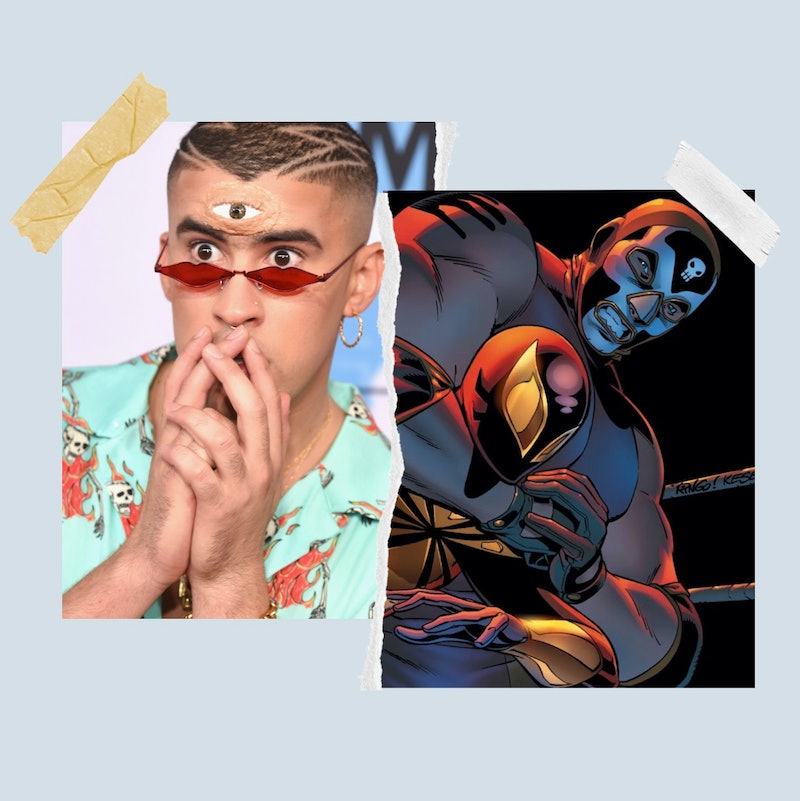 It may be a while before we see Tom Holland headline more Spider-Man movies — but until then, Sony is busy introducing a lineup of new characters in the web-slinger’s world. One month after announcing Madame Web, starring Sydney Sweeney and Dakota Johnson, the studio revealed that an El Muerto movie is in the works.

The new film, which was announced at CinemaCon April 25, will star international music sensation Bad Bunny in the titular role — making the Grammy winner the first Latino lead of a live-action Marvel movie, Variety reports. Though the film is still more than a year away, here’s everything you should know about El Muerto’s plot, release date, and connection to a certain Marvel hero.

So far, the only El Muerto cast member announced is Bad Bunny (aka Benito Antonio Martínez Ocasio). “To bring El Muerto to life is just incredible ... so exciting,” he said at CinemaCon, per Variety. The character does have major ties to Spider-Man in the Marvel comics, so there’s reason to be optimistic for a Holland cameo, or at least a reference to his post-No Way Home situation.

Though Sony Motion Pictures hasn’t dropped story specifics, the Marvel comics provide a few possible plotlines. According to Marvel, the current El Muerto is Juan Carlos — but it’s actually a mantle passed down between generations, complete with a wrestler’s mask and accompanying powers. El Muerto also inherits a built-in enemy, El Dorado, who killed Juan’s dad but spared him under the condition that he find a “masked hero — a true champion of the people — and humiliate him and unmask him publicly” within 10 years’ time, as we learn in 2006’s Friendly Neighborhood Spider-Man No. 6. El Muerto selects Spider-Man for the duel — but after he loses, and El Dorado prepares to kill him, Spidey helps save his masked opponent and the pair actually work together to defeat El Dorado.

El Muerto definitely has the makings of a very scary antihero (his name does mean “the dead,” after all), but his character is less obsessed with fighting than his mask might imply. During his duel with Spidey, El Muerto admits that he doesn’t even want to hurt him — and the very reason El Dorado killed the senior El Muerto is because Juan was too scared to fight, and didn’t want to take on that aspect of his family’s legacy. So it will be interesting to see how El Muerto brings the reluctant fighter vibe to the big screen, if Sony goes that route.

It will be some time before we see an El Muerto trailer, but we do know when the film is arriving. Sony revealed at CinemaCon that the El Muerto premiere date is Jan. 12, 2024.

This post will be updated with the trailer and additional plot details as more information on El Muerto becomes available.

More like this
Elizabeth Olsen's Chris Evans Friendship Update Was Accidentally Hilarious
By Grace Wehniainen
Everything To Know About Marvel’s 'Thor: Love And Thunder'
By Grace Wehniainen
What Does Doctor Strange’s Third Eye Mean?
By Arya Roshanian
Wait, Did Wanda Die In 'Doctor Strange And The Multiverse Of Madness'?
By Arya Roshanian
Get Even More From Bustle — Sign Up For The Newsletter