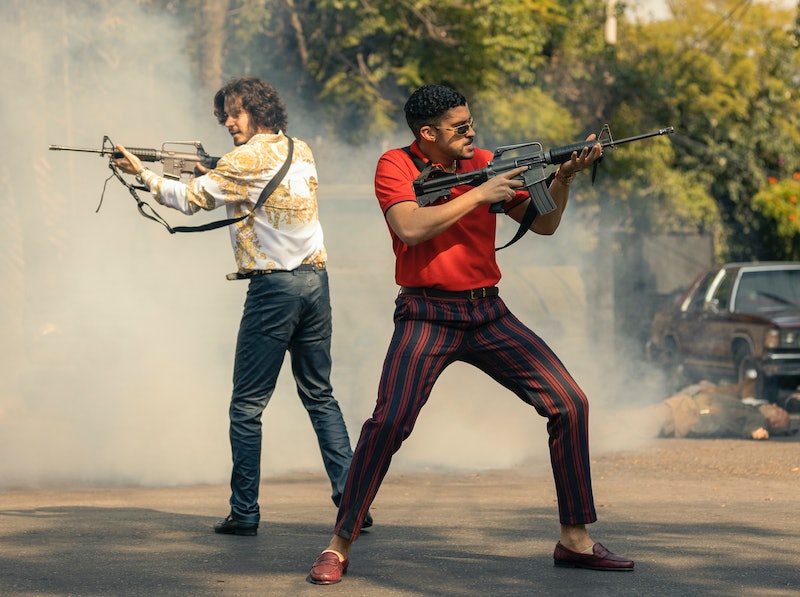 Narcos: Mexico’s third and final season picks up in the aftermath of Félix Gallardo’s arrest, centering around a new generation of Mexican kingpins called the “Narco Juniors.” Serving under Ramon Arellano Felix, they’re a group of rich kids who fall in love with the violence of cartel life. Among their members is Arturo “Kitty” Páez, played by Benito Antonio Martínez Ocasio — aka rapper Bad Bunny.

Bad Bunny was drawn to the role because he loved the original Narcos series. “When they announced Narcos: Mexico, I was sold; I'm honored to be a part of the show," he told Entertainment Weekly in September, adding that “Kitty is a charismatic guy who love[s] looking fresh.”

While the show takes liberties with the character, Kitty is based on a notorious cartel leader named Everardo Arturo Paez, aka “El Kitty.” Per The Los Angeles Times, Paez grew up in Chula Vista and was very close with Benjamin and Ramon Arellano of the Arellano Félix cartel. According to the Argentinian news site Infobae, Crónica journalist Jesús Blancornelas wrote in 2002 that Paez was on the “supreme court” of Arellano Félix. He “judged and sentenced” enemies, “negotiated very heavy matters,” and ultimately “decided who to kill.”

In November 1997, 34-year-old Paez was captured by Mexican authorities, who then informed the U.S. Justice Department. Per The Los Angeles Times, his arrest was considered the “first significant action to emerge” in cross-border law enforcement cooperation against drug trafficking. “This is an important development. It sends a message loud and clear to drug traffickers that the days of impunity are numbered,” a senior Justice Department official said. “This is one of their number three or four guys. He is one of the major organizers of drug trafficking loads across the border.”

U.S. officials wanted Paez extradited immediately, but it didn’t happen until January 2001, when Mexico’s Supreme Court issued a ruling that removed the legal barriers for the extradition of Mexican citizens. Per The Los Angeles Times, Paez’s extradition marked the first time that Mexico agreed to hand over a major Mexican drug suspect.

Paez was charged in 1997 with six counts for directing tons of shipments of cocaine into the United States from 1988 to 1996. The charges also included money laundering and a “drug kingpin allegation,” which carried a mandatory life sentence.

In October 2001, Paez pled guilty to organizing and overseeing a group that snuck drugs across the border to San Diego and Los Angeles. While he denied involvement with the Arellano Felix gang, this plea helped him to avoid a life sentence.

Per The San Diego Tribune, he was sentenced to 30 years in prison in January 2002. He was denied supervised release and probation in 2012, and is set to be released in 2032.

More like this
At 28, Debra Jo Rupp Was Living A Much Different '70s Show
By Grace Wehniainen
Every 'That '70s Show' Character Who Returned For The Netflix Spinoff
By Grace Wehniainen
The Dog & His Handler In 'Gunther’s Millions' Are Worth, Well, Millions
By Gretchen Smail
The 'Freeridge' Cast Shared Their Hopes For A Potential Season 2
By Grace Wehniainen
Get Even More From Bustle — Sign Up For The Newsletter
From hair trends to relationship advice, our daily newsletter has everything you need to sound like a person who’s on TikTok, even if you aren’t.