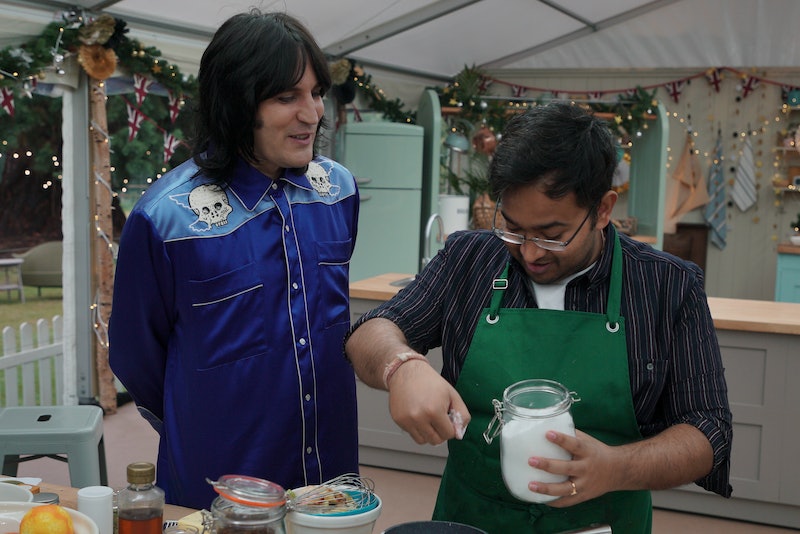 In The Bake Off New Year special judges Paul Hollywood and Prue Leith gave past bakers the opportunity to be crowned star baker again. Rahul Mandal, Helena Garcia, Henry Bird, and Nancy Birtwhistle returned to the tent to remind viewers of their talents, but it was the reveal that GBBO's Rahul made Noel Fielding's daughter a birthday cake that truly stole the show — and the nation's hearts.

Fielding became a dad for the first time back in 2018, and it turns out Mandal made quite the trip to deliver the GBBO presenter a cake for his daughter's birthday a year later. "On my daughter's first birthday, Rahul made her a cake and came down all the way from Rotherham on the train with a cake on his lap [...] what a legend," Fielding said, which was promptly shared on the official GBBO Twitter.

Mandal used this cake making experience as inspiration for his birthday cake on the episode, explaining how he put Noel's cake in two tins and assembled it once he got to London. "So the base tier is going to [that] birthday cake." To top it all off, Mandal also revealed a peculiar eating habit to Matt Lucas while making the cake. Turns out the baker eats butter from the block and prefers to snack on it over chocolate. "I'm too weirded out by Rahul to do a time call," Lucas told Fielding, perplexed.

It's no wonder that, with the addition of his flawless baking skills, that the 2018 winner landed the title of 2021's first star baker. "I want to dedicate this to all the 132 bakers that have been on Bake Off so far," he said holding the trophy. "It belongs to all of you, because I learnt a lot from every single one of you. Without them, there is not a Bake Off family, and they make me fulfilled. They have become my family, my friends."

"I bake to make people happy, and I'll keep doing it," he concluded. What a legend indeed.

More like this
Ekin-Su & Davide’s ITV Travel Show Finally Has A Name
By El Hunt and Sophie McEvoy
Holly Willoughby & Phillip Schofield #Queuegate Drama, Explained
By Sophie McEvoy
DJ Tyler West Is Probably Safe From The “Strictly Curse”
By Maxine Harrison
Rhys Ifans Has A Good Reason For Keeping His Love Life On The DL
By Maxine Harrison
Get The Very Best Of Bustle/UK