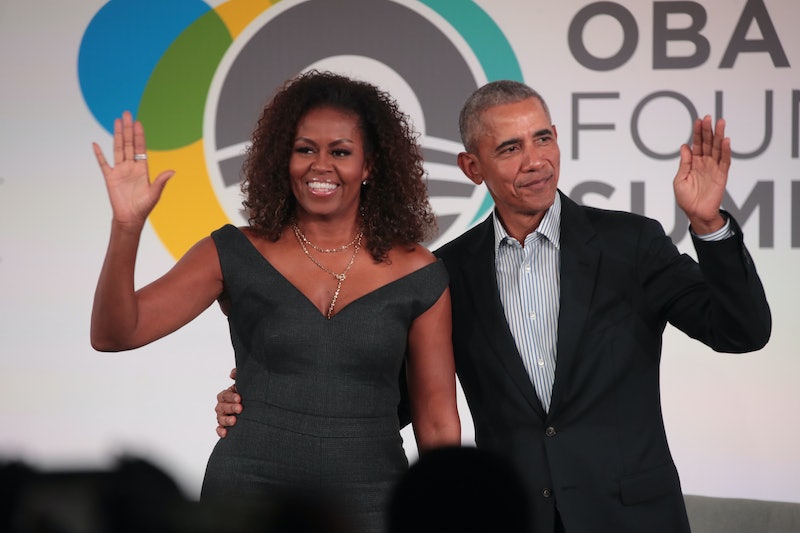 The former president and first lady love to support each other. Barack Obama shared a birthday message for Michelle Obama on Instagram on Sunday, Jan. 17, commemorating the occasion with a throwback picture and a sweet tribute in the caption. The photo showed a younger Michelle posing in front of a palm tree.

"Happy birthday to my love, my partner, and my best friend," Obama wrote. "Every moment with you is a blessing." He then added a sweet sign-off: "Love you, Miche."

Many of the couple's friends and fans wished the former FLOTUS well in the comments. Model Cara Delevingne posted a heart-eyes emoji, and rapper Diddy shared his own "Happy Birthday." TV host Bear Grylls commented, "Love it!" and then added "What a team..."

The birthday post is not the only recent time the former president has shared his appreciation for Michelle, who turned 57 on Sunday. In October, the couple celebrated their 28th wedding anniversary, and both took to Instagram to mark the special occasion. Obama posted a photo with Michelle, writing that his wife "makes me a better husband, a better father, and a better human."

Michelle also shared an anniversary photo of the two, writing in the caption that she loves him for "his smile, his character, and his compassion." The Becoming author added that she was "so grateful to have him as a partner through everything life throws at us."

Obama, who published A Promised Land in November, also received support from Michelle on social media following the book's release. She posted a photo from her Becoming tour on Instagram, writing that she was excited for her husband to have a similar experience with his memoir and that she "can't wait for you all to read it."

In November, Obama revealed A Promised Land would be dedicated to Michelle and their daughters, Sasha and Malia. He opened up on Instagram about how his own father's absence made him promise that "my kids would know me, that they’d grow up feeling my love keenly and consistently, knowing that I’d always put them first." The former president added that the three women are the most important people in his life, writing, "there’s no place in the world I’d rather be than with Miche and our girls."