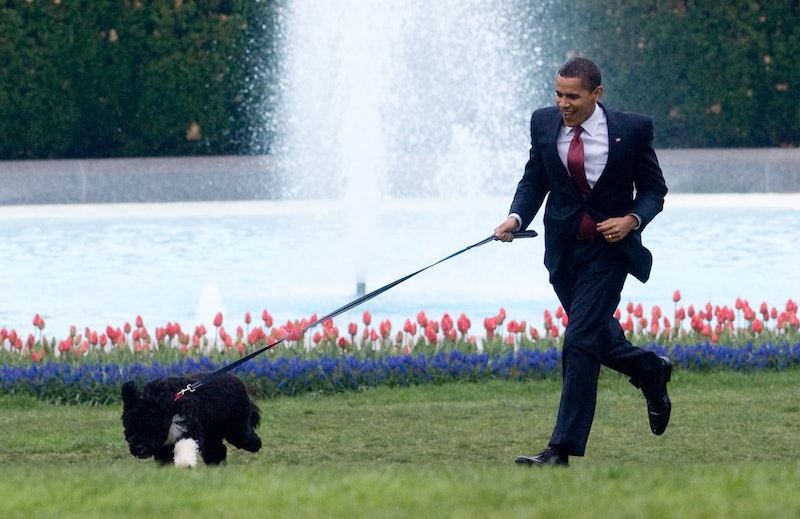 As the old saying goes, a dog is a man’s best friend, and apparently, this includes former presidents. The Obamas have been sharing social media tributes and heartfelt eulogies in honor of Bo, their four-legged friend of more than a decade, who recently passed away. On Monday’s episode of The Late Late Show with James Corden, former U.S. President Barack Obama continued to pay homage to Bo, sharing the surprising life lessons the dog taught him.

After Corden paid his respects to the late First Dog, Obama acknowledged that Bo’s arrival during his first year of office changed his life for the better, adding that he’d originally gotten Bo to fulfill a promise to his daughters Sasha and Malia, joking that one way the dog had changed his life was to “stop them from harassing me.” He also jested that in Washington there’s a well-known saying, “if you want a friend, get a dog,” particularly if you want a friend who would be nice to you during the presidency no matter what.

One of the most interesting parts of the interview came when 59-year-old Obama shared what all of us who owned pets during the pandemic know all too well: that they can give you a way to bond and even a reason to get out of the house. Obama shared that Bo was “this fun, furry, excuse to go for walks, and spend time together, and chase after each other.” He also shared that the pet was one of the threads that kept the family connected.

Surprisingly, an impactful life lesson Obama learned from Bo — that dogs can bring people together, even if those people generally hate you — came by way of social media comments. The former president shared that there was an “interesting” reaction to he and former First Lady Michelle Obama’s social media tributes to Bo, sharing with Cordon, “On our social media accounts as you might imagine, sometimes the comment sections are less than friendly, and you might get some trolling occasionally.” But, on these particular tribute posts, the comment section took on a more positive vibe, and for an unprecedented moment, all the comments were actually nice.

Obama recounted that even the most critical comments on these posts were kind, before sharing an example: “I think you were one of the worst presidents ever, but here’s my dog and I really feel sorry for you because I know how close I was with my dog.”

He also reflected on how those unifying comments really said something about the important role pets have in our lives, becoming carriers for memories and giving people comfort when they’re lonely. But the most important lesson? “If we could be as kind and thoughtful towards each other as we are about our pets we’d be doing a little bit better.”

Cordon absolutely agreed, and so do we. Here’s to our furry friends — may we learn from them, and be more like them.

More like this
Here’s Everything You Need To Know About Operation London Bridge
By Bustle UK
‘RHOSLC’ Star Jen Shah’s Arrest & Legal Drama, Explained
By Brad Witter and Jake Viswanath
'Grey's Anatomy's New Intern Got Advice From Dr. Bailey Herself
By Grace Wehniainen
Everything To Know About Taylor Swift’s 10th Studio Album, 'Midnights'
By Grace Wehniainen and Jake Viswanath
Get Even More From Bustle — Sign Up For The Newsletter