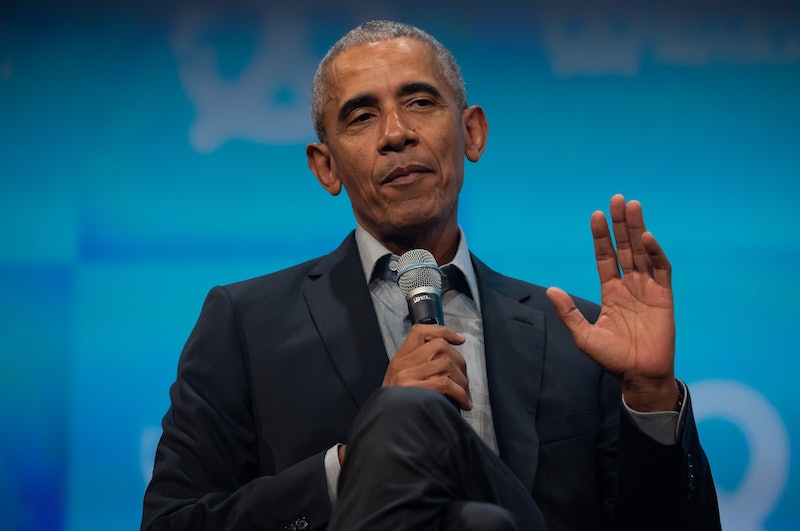 If you want to read about how the last Democratic president was elected, you're going to have to wait until after the 2020 votes are in. On Thursday, Sept. 17, former president Barack Obama announced the first volume of his new memoir A Promised Land won't be published until Nov. 17. That's two whole weeks after the Nov. 3 election, and there's a good reason why. As a spokesperson for the former president explained to The New York Times, Obama wanted to make sure to keep his focus on helping his former Vice President Joe Biden win first.

Even with a post-election release date, the former president and author's 768-page tome is sure to be worth the wait. In a lengthy statement shared on his Instagram, Obama outlined what readers can expect from the first volume of his memoirs (there's no release date for the second volume just yet), which will cover everything from his early political career to the 2011 death of Osama bin Laden. He also revealed that his memoir would touch on the personal struggles that he and his wife — and fellow author — Michelle Obama faced during their time in the White House.

"In A Promised Land I’ve tried to provide an honest accounting of my presidential campaign and my time in office: the key events and people who shaped it, my take on what I got right and the mistakes I made, and the political, economic, and cultural forces that my team and I had to confront then—and that as a nation we are grappling with still," he wrote in part.

A Promised Land is Obama's third book. He previously published Dreams From My Father in 1995, and The Audacity of Hope in 2006. At the time, he had a three book deal with Simon & Schuster, but after he was elected president in November 2008, he became a little too busy to write a third nonfiction title. After serving two terms as the leader of the United States, the still extremely busy Obama made time to reflect on his presidency.

Ultimately, the memoir's post-election release date could prove to be invaluable as Americans deal with the results of the 2020 presidential race — or deal with the lack of results, as many have warned that the election won't be called for weeks due to the influx of mail-in ballots this year. Whether Donald Trump becomes a two-term president, Joe Biden is voted into office, or the outcome is still unknown, Obama pledged that his book will contain his hopes for the country going forward. "At a time when America is going through such enormous upheaval, the book offers some of my broader thoughts on how we can heal the divisions in our country going forward and make our democracy work for everybody," he wrote on Instagram, "A task that won’t depend on any single president, but on all of us as engaged citizens."