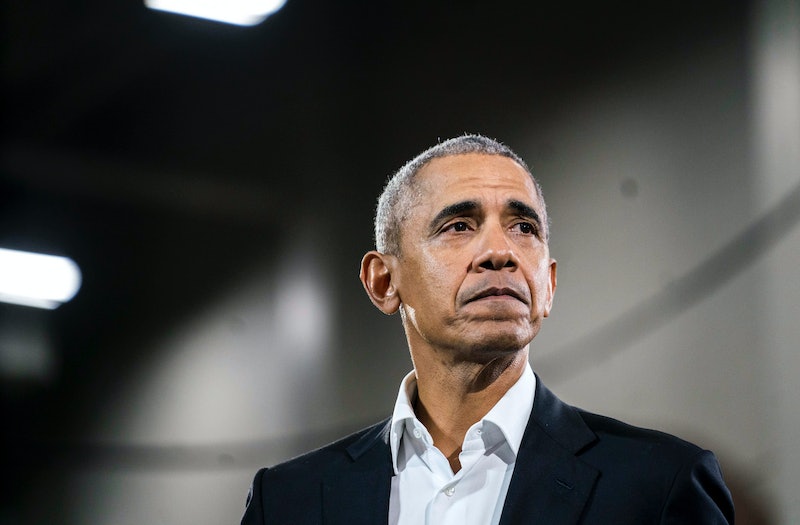 After a weekend of protests against police brutality in the wake of George Floyd's death, former president Barack Obama shared what activists should do next in order to ensure lasting change. Ultimately, the protests are only the first step in what will hopefully be a much longer process of holding law enforcement agents accountable for their treatment of the Black community. In an essay shared on Medium, Obama offered praise for peaceful demonstrations and solid advice to people wondering what comes next.

He began his essay by acknowledging that it's up to "a new generation of activists" to formulate a plan for change in line with the current times. However, Obama made it clear that after protests, the next step is to head to the voting booth — and not just for national elections.

"When we think about politics, a lot of us focus only on the presidency and the federal government," the former president wrote. "Yes we should be fighting to make sure that we have a president, a Congress, a U.S. Justice Department, and a federal judiciary that actually recognize the ongoing, corrosive role that racism plays in our society and want to do something about it. But the elected officials who matter most in reforming police departments and the criminal justice system work at the state and local levels."

Obama pointed out that voter turnout on a local and state level tends to be low, particularly among young voters. "The bottom line is this: if we want to bring about real change, then the choice isn’t between protest and politics," he advised. "We have to do both. We have to mobilize to raise awareness, and we have to organize and cast our ballots to make sure that we elect candidates who will act on reform."

The former president previously spoke about Floyd's death in a May 29 tweet. In his statement, Obama addressed America's systemic racism, writing: "It can't be 'normal. If we want our children to grow up in a nation that lives up to its highest ideals, we can and must be better." His essay echoed those sentiments, but he also offered people concrete ways in which to enact change now that protesters have captured the nation's attention.

In addition to voting, he advised formulating a clear list of "demands for criminal justice and police reform," which he noted will make it harder "for elected officials to just offer lip service to the cause and then fall back into business as usual once protests have gone away." Additionally, Obama pointed readers to the Obama Foundation website for a list of resources for anyone looking for ways to make a difference at a local and federal level.

Both Obama and his wife Michelle have found a way to encourage peaceful demonstrations and help build a road toward lasting change through meaningful advice in the days following Floyd's death. On Saturday, the former First Lady made her own post on Instagram in which she expressed her sadness and heartbreak over the death of Floyd and other Black men and women who have been victims of police brutality.

She noted that it's up to everyone to work together to change the system, writing, "It starts with self-examination and listening to those whose lives are different from our own. It ends with justice, compassion, and empathy that manifests in our lives and on our streets."

More like this
Eurovision Has Been Given A Whole New Look Ahead Of Its Liverpool Debut
By Bustle UK
6 Organizations Fighting Police Brutality That You Can Support Right Now
By Syeda Khaula Saad and JR Thorpe
This Is When Netflix Is Going To Start Charging You For Sharing Passwords
By Darshita Goyal
8 Charities To Donate To During Black History Month
By Alexis Morillo
Get Even More From Bustle — Sign Up For The Newsletter
From hair trends to relationship advice, our daily newsletter has everything you need to sound like a person who’s on TikTok, even if you aren’t.