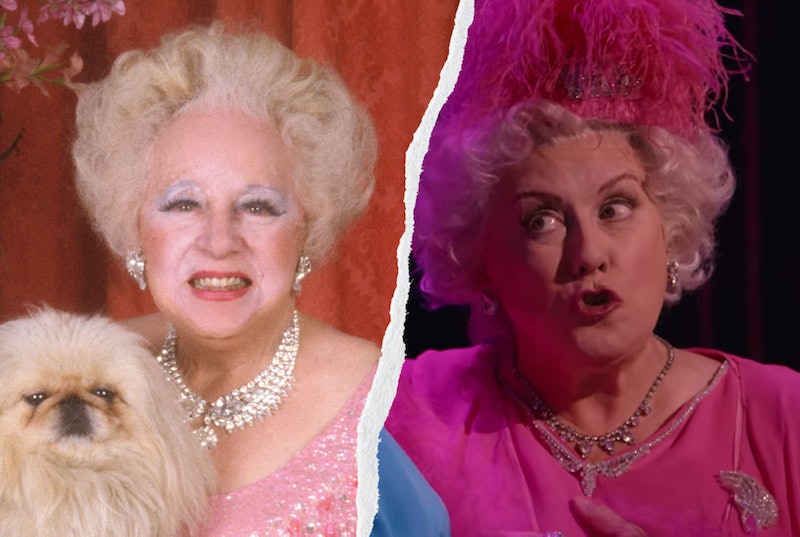 Diana: The Musical may be the campy theatrical production no one asked for, but no one was more fantastical — or more colorfully dressed — than Dame Barbara Cartland.

Known for her eccentric style, drag-worthy makeup skills, and Zsa Zsa Gabor-like persona, Cartland was a celebrated fixture in both the literary world and pop culture sphere. Born in 1901 to a prominent English family, she soon experienced financial hardship when her immediate family fell into bankruptcy. She climbed the social ladder as she began work as a society reporter in the ’20s and ’30s, including a stint as a gossip columnist at the Daily Express in 1935. All of this soon led her to writing books, mostly romance novels, with some literary fiction also sprinkled in the mix.

Within her lifetime, Cartland published over 700 novels, and many more would be published posthumously. (As her son, Ian McCorquodale, told Historyradio.org, “Her publishers could not keep up with her and when she died she left me 160 unpublished manuscripts, which I am now successfully publishing digitally in the Barbara Cartland Pink Collection.”) But how was this queen of romance novels connected to the royal family, and, more specifically, Princess Diana? Below, an overview of Cartland’s relationship to the “People’s Princess,” as well as her astounding legacy as a novelist and socialite.

Cartland holds the Guinness World Record for most books published in a single year.

During the span of her 76-year career, Cartland published an unbelievable 723 romance novels, mostly about young heroines who were swept off their feet by handsome and stately men. She holds the Guinness World Record for most books published in a single year — a casual 191 titles. No writer has yet surpassed this distinction, truly making Cartland one of the most iconic novelists of the 20th century.

Her work ethic was impressive, to say the least.

How does one write 191 novels in a single year and have time for anything else? The answer: assistants. In an interview with HistoryRadio.org, Cartland’s son Ian McCorquodale revealed his mother’s writing routine, which included the help of a secretary to type and edit her work.

“She wrote three or four days a week, starting after lunch at 1:30 p.m. on the dot. By 3:30 p.m., she had dictated up to 8,000 words … so with seven chapters she wrote a book in a fortnight,” explained McCorquodale. “Her secretary would type the chapter before she left at 5:30 and it would [be] corrected for final typing the next morning.”

Being the reigning queen of romance novels wasn’t the only thing royal about her — she was also the step-grandmother of Diana, Princess of Wales. Cartland’s daughter, Raine, left her first husband to marry Diana’s father, Earl Spencer, in 1976. (Diana and Raine famously did not get along.)

Diana was said to have read and loved Cartland books as a young girl, and was reportedly transfixed by the author’s fairytale romances. Cartland was once quoted to have said: “The only books Diana ever read were mine, and they weren’t terribly good for her.”

Cartland was not invited to Diana and Prince Charles’ wedding.

Apparently, Cartland was more fond of the Spencers than they were of her. She wasn’t invited to Prince Charles and Lady Diana’s 1981 wedding, but was excited about the royal union. “It mirrors my plot lines,” she told People of their engagement, “where a virginal heroine, like Di, falls passionately in love with a man of nobility and rakish, if not raffish, characteristics, like Charles. Di is chaste and chased, just like one of my characters.”

More like this
'The Crown' Season 6 Has Suspended Filming "Out Of Respect" For The Queen's Death
By Bustle Staff
Here's How Netflix Should Adapt Prince Harry's Memoir Into A Movie
By Ginny Hogan
Here’s Everything Coming To & Leaving Netflix In February
By Jake Viswanath
Princess Diana’s Brother Shared A New Photo Connected To Her Childhood
By Darshita Goyal
Get Even More From Bustle — Sign Up For The Newsletter
From hair trends to relationship advice, our daily newsletter has everything you need to sound like a person who’s on TikTok, even if you aren’t.