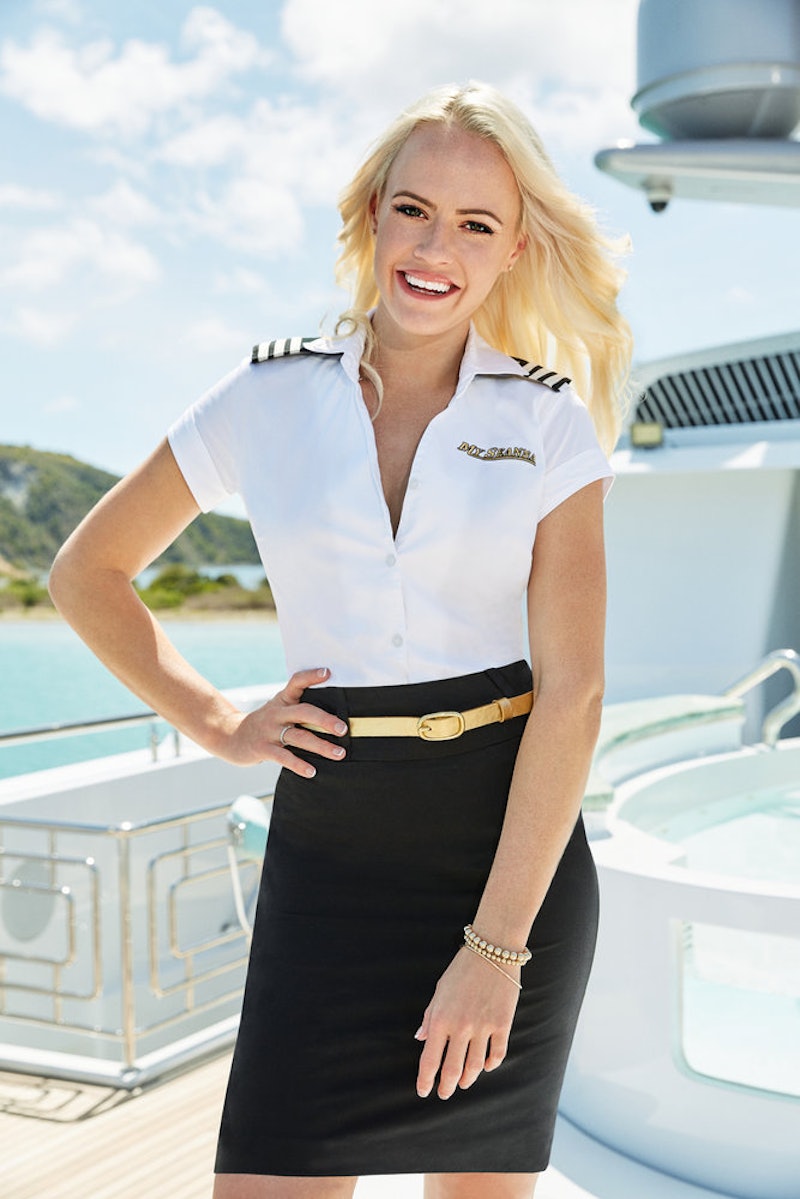 A new chief stew is coming aboard the My Seanna for Below Deck Season 9: Heather Chase. According to her Bravo bio, Heather is always careful to ensure that the ship’s guests have a great experience. But when one of her stews becomes unmotivated, it’s up to her to pick up the slack and maintain the crew’s output. "I put people in line that need to be put in line," Heather says in trailer for Season 9. “This isn’t high school drama; this is five-star service.”

It remains to be seen if Heather will stick it out on the show as long as former chief stew Kate Chastain, who was a fan favorite from Season 2 until she left in Season 7. Francesca Rubi filled Kate’s shoes in Season 8, but the crew got frustrated with her attitude and the way she picked on her second stew, Elizabeth Frankini. Now, it’s up to Heather to take the lead as Below Deck’s fourth chief stew. Here’s everything to know about her.

Heather may be new to the ship, but she’s already familiar to at least one crew member in the broader Below Deck universe: Alex Radcliffe, who was a deckhand on Below Deck Mediterranean Season 5. "So pumped the secret is out that one of my best friends in the yachting world is the chief stew of the new season of [Below Deck]," Alex wrote on Instagram on Aug. 19. "I can honestly say she’s one of the most genuine/ kind hearted [humans] I know."

Heather Is From Hawaii

Heather’s affinity for the sea isn’t surprising: according to her Instagram, she grew up being around the water in Hawaii. “Some people say Disney is the ‘happiest place on earth’...I say the Nāpali coast is the happiest place on earth,” she wrote in a July Instagram post. “Kaua’i will always have a HUGE & SPECIAL place in my heart.”

In another Instagram post, Heather wrote that she, “could never properly put into words how much this island & community means” to her, concluding, “forever a student, forever a steward, forever grateful.”

Heather Has A Job Outside Of Yachting

When she’s not managing crew members on the open seas, Heather works as a certified yoga teacher and has operated under the business name Heather Kapiolani Yoga. She often posts pictures of her doing yoga poses on Instagram alongside poetry about gratefulness and introspection. This mindfulness will likely come in handy for both her and the crew, as based on the trailer for the season, she’s going to need all the zen vibes that she can get.

More like this
We Finally Have Some Answers To How Heather Gay Got A Black Eye On 'RHOSLC'
By Samantha Rollins
Brooklyn From 'The Bachelor' May Have Accidentally Predicted Her Time On The Show On IG
By Grace Wehniainen
Brianna Revealed Why 'The Bachelor' Premiere Was Tougher For Her Than You Saw On TV
By Brad Witter
This 'Bachelor' Contestant Already Has A Lot In Common With Zach
By Grace Wehniainen
Get Even More From Bustle — Sign Up For The Newsletter
From hair trends to relationship advice, our daily newsletter has everything you need to sound like a person who’s on TikTok, even if you aren’t.