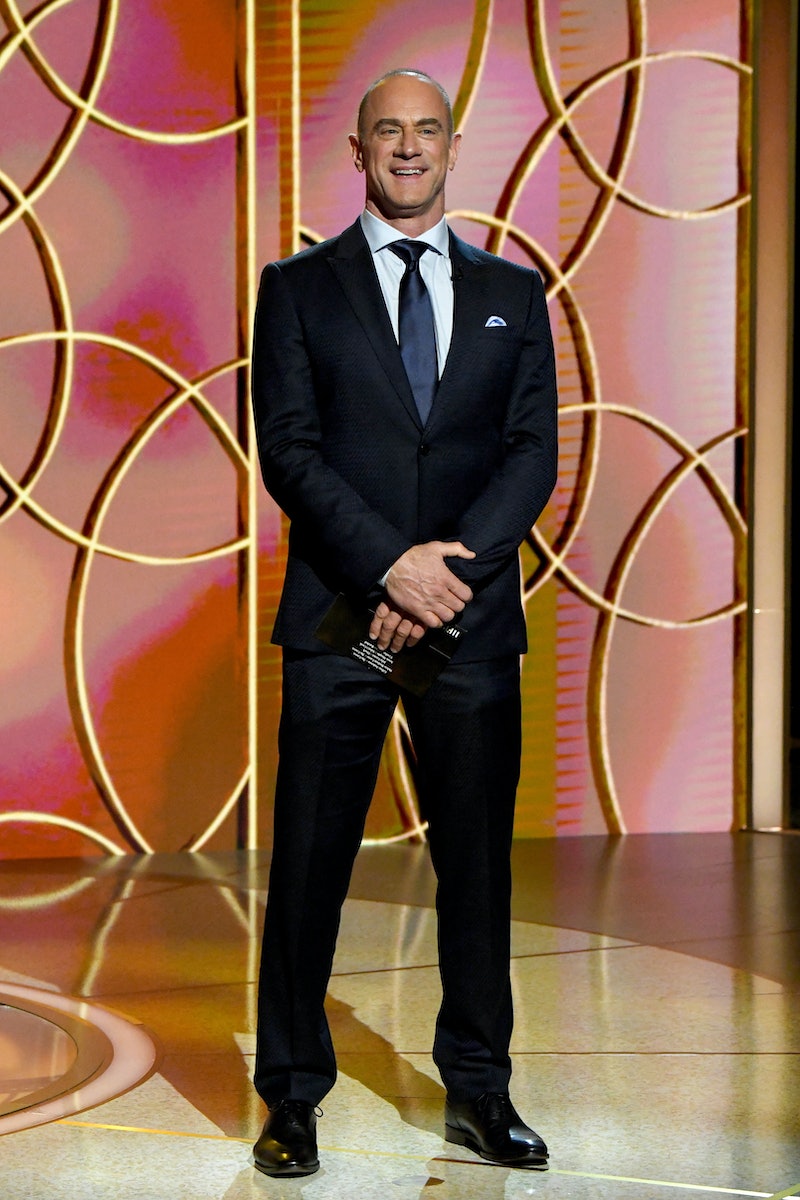 Christopher Meloni never really left TV after departing Law & Order: Special Victims Unit in 2011, going on to star in shows such as Happy! and appear in a host of others — from Veep to Pose. Still, Meloni’s return to the Law & Order franchise in April has brought renewed attention to the beloved actor... and his online antics. According to a user growth tracking platform called Social Blade, Meloni has gained more than 31,000 Twitter followers over the last month alone, with many joining in for Meloni’s tweets on politics, acting, and the butt picture that went viral. Meloni’s Twitter style is one of chaotically dry, reflexive humor — his best moments are frequent replies to fans (so why not try saying hi?) and people and politicians he’s very much not a fan of.

Because Meloni is super active online, all those sharp comebacks and commentary can be easy to lose track of on your timeline, so here are some of Meloni’s best tweets to snack on.

When Twitter user Peter Hess shared a photo of Meloni filming in New York this spring, Twitter showed Meloni — and his butt — some serious love. (One journalist named Dave Itzkoff joked, “How do you think they make that donk-donk sound in each episode.”) Meloni himself was game for the memes and even answered a few in iconic fashion. After a fan asked if his “birthday cake” was homemade, the actor played along with a truly cheeky response.

Another wondered if Meloni’s rear could be used as a floatation device in case of an emergency. Good news: apparently, it can!

As for how Meloni achieved his look, the actor offered a deliciously simple answer:

Now that Meloni’s on Organized Crime, he is very much into Law & Order fan culture. To one user’s edit, he replied with a simple “yes” of approval. Sure, understated — but an actor showing some love to his fandom is always very much appreciated.

Meloni also had the perfect reply to a Law & Order tweet asking for fans’ favorite Stabler moments — because he loves Stabler and Olivia Benson’s relationship just as much as we do.

And let’s not forget the time he showed love to a fanfic-esque tweet about Stabler and Benson’s much-anticipated reunion.

Meloni’s always down to poke some fun at his friend and other half to the Stabler name. He responded to a fan’s request that the pair “[break] the internet with a selfie,” obliging with an on-set snap of himself and the “young up and comer Marsha Haggarty.” A trolling expert!

And he’s not above hyping up a random fan’s precious family photo.

Some of Meloni’s most brilliant tweets are casual responses to the world around him, from this spot-on response to Kevin McCarthy’s bizarre reading of Dr. Seuss...

... to the gentle introspection provoked by birdsong. #Fascinating, indeed.

Above all, Meloni seems to be a serious force for good on Twitter — something we could always use much more of there. In response to a playful, eye-catching collection of Meloni photos over the years, the beloved actor offered some sage words of wisdom: “Live in truth. It’s funner.”