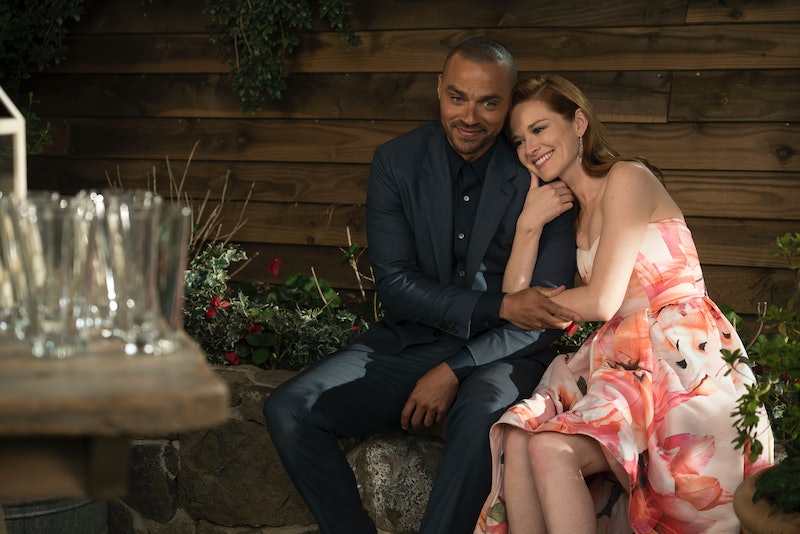 When it comes to choosing her favorite Japril scenes, Grey’s Anatomy star Sarah Drew has a lot of material to choose from. Her character April Kepner has been through a lot since meeting Jackson Avery (Jesse Williams) as an intern at Grey Sloan, including a pregnancy scare, an elopement, the loss of a baby, a divorce, and the birth of their daughter Harriet in Season 12. But it was her return to Grey’s in the May 6 episode after leaving the show in Season 14 that marked some of Drew’s most cherished work with Williams — who, as the nostalgic episode was airing, announced he’s also leaving the series.

“They’ve gone through so much, and you’ve watched it,” Drew, who said she “cried so many times” while screening the episode, told reporters in a press conference. “It just felt like you’re peering into the lives of two people that you love, who clearly love one another, and witnessing them wrestling with big, massive life questions in a way that is loving and mature. And it was just… it was so beautiful.”

Although the actor said she has “so many” favorite Japril moments, here are the other three she named.

In Season 10’s “Get Up, Stand Up,” Jackson professes his love for April right in the middle of her wedding to Matthew (Justin Bruening). The packed church — including Jackson’s girlfriend Stephanie (Jerrika Hinton) — looks on in shock, while April’s reaction is left as a cliffhanger. But as fans later learned, April left Matthew at the altar and eloped with Jackson instead. “Does it get any more romantic, but also heartbreaking, than that?” Drew opined.

When They Lose Baby Samuel

It’s ironic that this Season 11 episode is titled “All I Could Do Was Cry,” because that’s exactly what Drew did while filming. In it, April and Jackson’s first child, Samuel, dies shortly after he’s born. (He had a rare birth defect called Type 2 osteogenesis imperfecta, which is characterized by extremely fragile bones). “That whole episode, all I could do is cry,” Drew recalled. “When we get the news and are just like holding one another for dear life... Those scenes, they just left such a deep mark on me in a beautiful way, and I think connected us as actors in a really profound way.”

When Jackson Prays April Back To Life

In the penultimate episode of Season 14 — Drew’s final season on Grey’s — April becomes hypothermic with no pulse and no vitals after a car crash. With nothing else to do but pray, Jackson pleads with God not to let her die. Soon afterward, April squeezes his hand and opens her eyes. Though April ultimately decided to marry Matthew and leave Grey Sloan, she reveals in her Season 17 comeback that they broke up and agrees to move to Boston with Jackson.

“One of the biggest heartbreaks for me about leaving in Season 14 was that [Jackson and April] didn’t get to be endgame,” Drew said. “Who knows what happens when they make their way to Boston? But I think there’s a great deal of hope that’s there.”

More like this
'Friends' Star Maggie Wheeler Offers Support To Matthew Perry After Reading His Memoir
By Alyssa Lapid
'Abbott Elementary' Fans Probably Missed This 'Parent Trap' Easter Egg
By Sam Ramsden
At 28, Debra Jo Rupp Was Living A Much Different '70s Show
By Grace Wehniainen
Raven-Symoné Addressed Fan Pushback To Her Name's Actual Pronunciation
By Stephanie Topacio Long
Get Even More From Bustle — Sign Up For The Newsletter
From hair trends to relationship advice, our daily newsletter has everything you need to sound like a person who’s on TikTok, even if you aren’t.