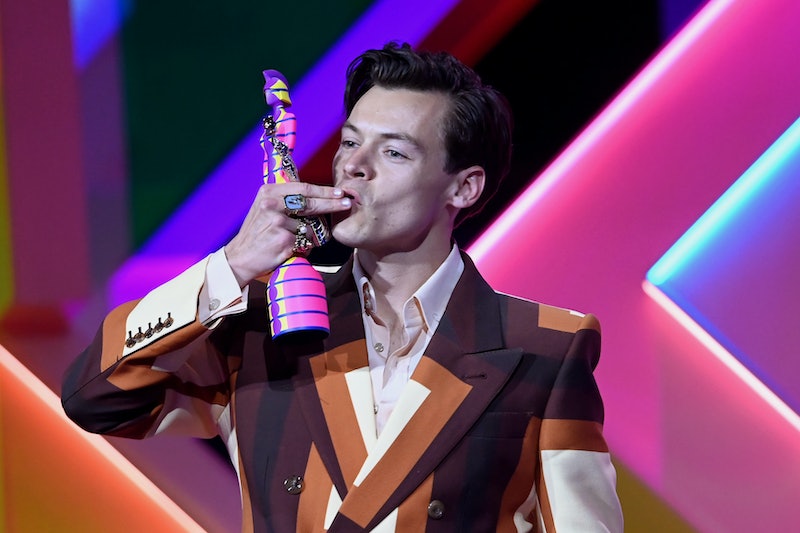 It's been a big year for Harry Styles. The ex-One Directioner won big at both the BRIT and Grammy Awards for his solo endeavours, embarked on his two-month long American leg of his Love On Tour tour, and now we can finally talk about – spoiler alert – Harry Styles joining the Marvel Cinematic Universe as Marvel Studios has officially given a Harry Styles an Eternals poster of his very own to acknowledge the immaculate casting, and fans are thrilled.

Arguably the worst-kept casting secret of recent months after the Eternals film, released on November 5, showed Harry Styles as Eros – the “brother of Thanos” and “Royal Prince of Titan”, aka Starfox – rocking up in a post-credits scene. In case you haven’t seen Eternals yet, and plan to catch it while it’s still in cinemas, this is your official *spoiler alert*.

Teleporting onto the Eternals’ ship, the Domo, in comes Eros, who introduces himself and explains that he’s come to help. “Your friends are in big trouble, and we know where to find them,” he says. Whilst those who have seen Eternals in the cinema have had weeks to digest the information, it’s taking until this week for Marvel Studios to officially acknowledge the casting decision.

“Meet the Royal Prince of Titan, brother of Thanos, the Knave of Hearts, defeater of Black Roger, the great adventurer, Starfox ” the posts read. “Check out Eros’ brand new character poster and see @HarryStyles in Marvel Studios’ #Eternals only in theaters NOW! ”

Several fans shared their admiration for Styles’ official poster, expressing their excitement over seeing more of Eros in the MCU. “How is this real life,” one Instagram user commented, while another humorously added: “not the Disney thirst trap”.

“Very excited to see what they do with Starfox within the MCU! Eros is here!!! Congrats Harry Styles,” one person tweeted. “Much better than I anticipated, hooked,” wrote another.

More like this
Twitter Is Overjoyed By Angela Bassett’s Record-Making Oscar Nomination
By Maxine Harrison
New Details About Jeremy Renner's Snowplow Accident Reveal The Actor's Intentions
By Sam Ramsden
Channing Tatum “Nearly Killed” Salma Hayek During 'Magic Mike' Lap Dance
By Sam Ramsden
Jemima Khan Used Her Own Life As Inspo For 'What’s Love Got To Do With It?'
By Darshita Goyal
Get The Very Best Of Bustle/UK
Sign up for Bustle UK's twice-weekly newsletter, featuring the latest must-watch TV, moving personal stories, and expert advice on the hottest viral buys.