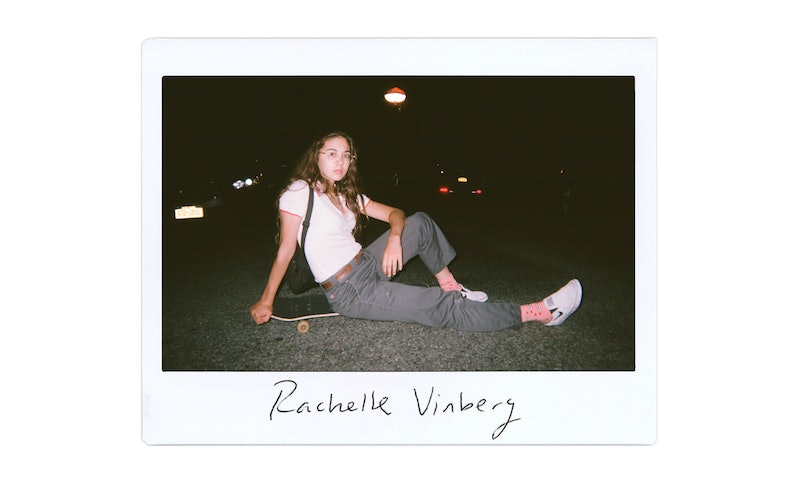 When celebrities hang out with Bustle writers, we want to give them the chance to leave their mark. Literally. So we hand them a pen, a piece of paper, a few questions, and ask them to get creative. This time, Betty star Rachelle Vinberg is leaving her mark in the Bustle Booth.

Rachelle Vinberg, who stars in the HBO skateboarding series Betty, lives in a different New York City from the rest of us: denser, more connected, and faster to move around. “Let's say I'm at Union Square walking. If I hear a skateboard, I look,” she tells me, trying to explain just how tight the circle of skaters feels. “Because I know I'm going to know who they are. Most of the time I know who they are, or I recognize them from the parks.”

The parks also happen to be how Vinberg got her acting start. She was hanging out with Betty co-star Nina Moran, who she met via YouTube, when director Crystal Moselle approached them about making a film based on their lives.

“We were the only girls our age posting skate videos,” says Vinberg of how she met Moran. “Literally I typed, skater girl in New York City, and we were the only ones who came up.” Vinberg and Moran starred in a short film for Moselle called That One Day, which spun out into 2018’s breakout indie feature film Skate Kitchen. Now, those same characters and that same kinetic world have been stretched into six episodes of a long, hazy downtown summer hang called Betty on HBO.

Though Vinberg is reprising her role of Camille, filming Betty felt different. Skate Kitchen was her first professional acting gig, and a learning experience in many ways. “I feel like filming Skate Kitchen, I was probably the most angsty I've ever been in my life.” Now, the 21-year-old Vinberg is taking acting classes and reading scripts that have nothing to do with skating. “With Betty coming out, it's like, I'm not going to take this for granted. I'm going to enjoy all the bad parts, too."

She seems to mean it. Vinberg talks about posting up at the base of the Williamsburg Bridge for a zero-dark-thirty call time like it’s one of the most special mornings of her life. “We had how many girls? Forty or something, to bomb the bridge,” she says. Casting directors flew in skaters from other states just to find enough women to safely film the scene.

“I have never seen that many girls on that bridge and the feeling was just — everyone was just excited.” Type skater girl into YouTube right now, and you’ll find a lot more hits now than Vinberg and Moran did. “It was like the first day of school and you're like: Let's do this. This is sick. That was when I realized, Wow, this is bigger than any of us right now. The fact that we're doing this, this is history.”

Check out Rachelle's answers to our Bustle Booth questionnaire below.