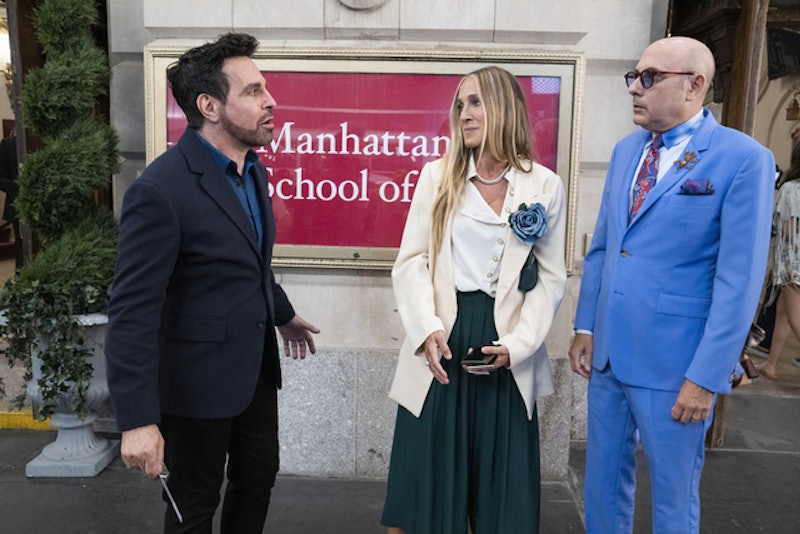 Major spoilers ahead for the Sex and the City reboot, And Just Like That. Carrie (Sarah Jessica Parker) and Big (Chris Noth) have been through it all. Over the course of six seasons of Sex and The City and two follow-up movies, they’ve broken up, gotten back together, cheated, lied, been engaged twice, and called off one wedding before finally finding their way to marital bliss. But the HBO Max reboot And Just Like That quickly throws their happy ending into disarray.

When And Just Like That picks up, Carrie and Big are together and still madly in love. They have plans to drive out to the Hamptons over the weekend. Carrie comes home to Big cooking up a storm. She puts a sweet Todd Rundgren record on and they sway.

Then, Carrie leaves to attend Charlotte's (Kristin Davis) daughter's fancy piano recital. Big takes a spin on his Peloton and suddenly....he has a heart attack. Carrie comes home to find him slumped in the shower, the water still running. The great love of her life, Mr. Big, dies in her arms.

This may not a total surprise to fans who have been tracking every rumor and theory about the reboot. In the months preceding And Just Like That’s premiere, speculation swirled about Carrie and Big’s relationship. In July, Page Six claimed that leaked script pages revealed a rift between the on-again, off-again couple: While Carrie was feeling great about her friends and her new podcasting career, her marriage was not going well. Then, on-set photos surfaced showing Carrie kissing a new man played by Jon Tenney on the stoops of her famous Upper East Side brownstone. There was even a report that Big would die. But amid the extensive gossip swirling about the show, it was hard to know what was true.

Big revealed his heart problems for the first time in the final season of Sex and the City. He came back to New York for an operation that caused Carrie to totally panic. Even though Big is rarely one to show emotions, he shared his fears about death with Carrie, and the two got close again in his time of need. It feels even more devastating that his heart condition ended up being the thing that pulled Carrie and her beloved John James Preston apart forever.

After his death, everyone flocks to Carrie’s side (even Samantha, who has apparently moved to London after a falling out with Carrie, sends a touching display of flowers for the funeral). The sudden nature of Big’s death acts as a reminder to everyone how truly precious and precarious life is. Miranda (Cynthia Nixon) and Steve (David Eigenberg) hold each other a little bit closer. Stanford (Willie Garson) and Anthony (Mario Cantone) promise to stop fighting over the little things. Charlotte finds solace in her daughters.

How Carrie will survive this devastating loss is unfathomable, but at least we know she won’t have to do it alone.