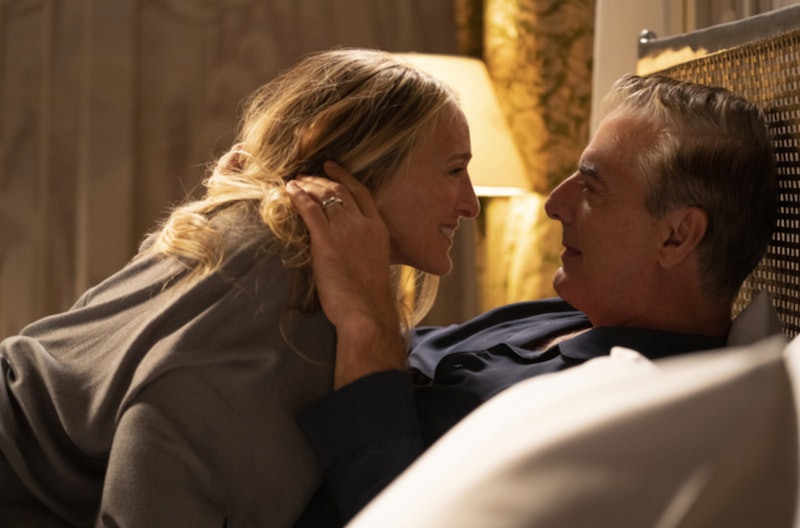 After years of rumors, Sex and the City is finally headed back to screen. And Just Like That, HBO Max’s hotly anticipated reboot of the beloved 2000s series, is set to premiere on Dec. 9.

It’s been over two decades since the world was first introduced to Carrie (Sarah Jessica Parker), Miranda (Cynthia Nixon), Charlotte (Kristin Davis), and Samantha (Kim Cattrall), a group of single friends navigating dating in New York City. All of them work high-powered jobs: Carrie is a columnist and author, Miranda is a lawyer, Charlotte is a gallerist, and Samantha is a PR woman about town. Over the course of the show, the group goes through a myriad of heartbreaks, career changes, and personal and professional triumphs. They support each other fiercely and show up for one another no matter what, usually wearing some fabulous ensemble straight off the runway.

The last time the women were onscreen together, it was in the second Sex and the City film in 2010, so you may need a bit of a refresher on where the characters left off (though Cattrall notably won’t reprise her role for the reboot). If you don’t have time for a full rewatch of the original six seasons plus the two feature films, read on.

The sixth and final season was a whirlwind for every character. When it opens, Carrie is dating fellow writer Jack Berger (Ron Livingston) after putting both Big (Chris Noth) and Aiden (John Corbett) behind her. Charlotte has gotten together with her divorce lawyer, Harry (Evan Handler), but isn’t sure she’ll be able to marry him because he insists he must marry a Jew. Samantha has just met Jerry Jerrod (Jason Lewis), hot waiter and soon-to-be A-list movie star, while Miranda has finally realized that she’s still in love with her ex (and father of her baby) Steve (David Eigenberg) – who, of course, now has a girlfriend.

A lot happens over the next 20 episodes. Charlotte converts to Judaism so that she can marry Harry, they break up, but then get engaged. The ending isn’t as happy for Carrie and Berger, who spend the majority of the season in strange passive-aggressive fights. Berger is clearly threatened by Carrie’s successful career and deals with it in extremely toxic ways until his ​​pièce de résistance: the infamous Post-it breakup. Samantha, being the selfless soul she is, becomes Jerry’s publicist, helping him to skyrocket from “unknown actor” to “famous hunk.” Miranda pines for sweet Steve until a handsome doctor moves into her building and they get together. That is until her son Brady’s birthday party, where she and Steve finally reveal their feelings for one another and reconcile.

Outside of all the usual romantic fare, there is quite a bit of tragedy. Charlotte has a miscarriage that devastates her and Harry. Samantha finds out that she has breast cancer and has to go through chemo. Big might need heart surgery. It feels like real life has caught up with the ladies of SATC. As they attempt to support each other through the various trials and tribulations, the one constant is that they have each other. Unfortunately, even that is thrown into chaos when Carrie meets famed Russian artist Aleksandr Petrovsky. He does not get her sense of humor, he is very temperamental, and yet Carrie decides that she really likes him. So much so that when he gets commissioned to open a new exhibit in Paris, she moves across the Atlantic Ocean to be with him. She bids farewell to her life in New York, leaving her three best friends to navigate their own huge life changes alone. Miranda moves to Brooklyn with Steve and Brady. Charlotte and Harry get married and apply to be adoptive parents. And Samantha recovers from chemo with Smith Jared by her side.

Surprise surprise: Paris does not go how she hopes. Big shows up just as things are going way south with the Russian, and after a full six seasons of will they, won't they, he and Carrie reunite on a bridge in Paris, declaring their love.

Say what you will about the SATC movies, but they weren’t lacking in extravagance or drama. The first film opens on Carrie, Miranda, Charlotte and Samantha four years after we last saw them in the show. Carrie is getting ready to move in with Big, Samantha lives a fabulous life in LA with Smith, Charlotte and Harry have adopted a baby girl, and Miranda and Steve are living the Brooklyn dream while raising Brady.

When Big finally proposes to Carrie, it feels like everyone is about to get their happily ever after. But just as we’re lulled into a sense of security, Steve tells Miranda that he cheated on her and she leaves him. Carrie’s wedding has grown from what was supposed to be an intimate exchange of vows into an over-the-top affair that causes Big to freak out on the big day. Carrie has her Vivienne Westwood gown on, a bird on her head, and her friends by her side when...Big never shows up. After encountering him in his car outside the venue, she smacks him with her bouquet and spends the rest of the film recovering from the betrayal. In an effort to get her life back in order, she dyes her hair brown and hires an assistant. Meanwhile, Steve and Miranda start attending couples counseling and repair their relationship, fittingly reuniting in the middle of the Brooklyn Bridge. Samantha randomly breaks up with Smith to move back to New York, and Charlotte finds out she’s pregnant.

A few months later, Charlotte bumps into Big at a restaurant, and he takes her to the hospital when her water breaks. It turns out that he has been writing Carrie regular apology emails, but she blocked his contact and hasn’t received them. When she returns to the penthouse they were supposed to move into to retrieve a pair of unworn Manolo Blahnik’s and finds Big there, he proposes and they get married. This leads us to Sex and the City 2, the largely disgraced sequel of the franchise due to its problematic depictions of the Middle East. It opens on Stanford (Willie Garson) and Anthony Marantino’s (Mario Cantone) lavish wedding, which is officiated by none other than Liza Minelli. All the ladies are in relationships, save Samantha, who is still happily single.

Charlotte is still getting used to being a mom to two young girls, Miranda has just left her law firm, and Carrie and Big are still married, though Carrie is not exactly content with their quiet life. When Big gifts her a TV for their anniversary, she freaks out. Luckily, Samantha gives the girls a chance to go on an all-expenses-paid trip to Abu Dhabi for her new PR client, and they jump at the chance. Chaos ensues, including a run-in between Carrie and her ex Aiden. Despite the fact that they are both married and their relationship is far behind them, they kiss and Carrie immediately confesses to Big.

While Carrie was busy cheating, Samantha was getting arrested on a beach for PDA, forcing them to pack up and fly home immediately. Back in New York, Big forgives Carrie with a fat diamond ring and everyone else is happy to be back with their families.

It’s not yet clear how far And Just Like That picks up after the movies, especially with Samantha gone. From the trailer, it seems that Carrie and Big still haven’t exactly figured out marriage and Miranda and Charlotte are in totally different phases of their lives (with grown-up kids). Luckily, we can be sure there will be lots of drama!

More like this
Watch 'Drag Race' Queens Get New Drag Names In This Exclusive 'iCarly' Video
By Jake Viswanath
Hilary Duff Spills The Tea On Why Disney+ Canceled The 'Lizzie McGuire' Reboot
By Jake Viswanath
All The Theories About Kathleen Peterson’s Death
By Morgan Leigh Davies
What Happened To The Real Sean Suiter From We Own This City?
By Kadin Burnett
Get Even More From Bustle — Sign Up For The Newsletter