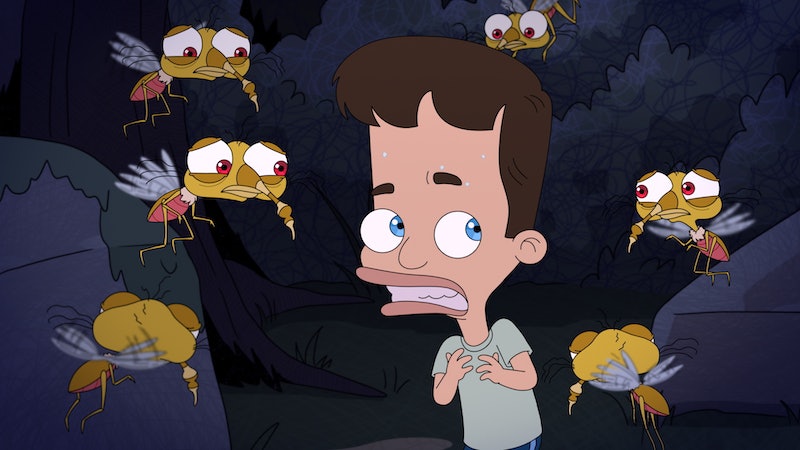 Netflix’s Big Mouth has always relished in crudeness and absurdity, telling both hilarious and uncomfortable stories about puberty and friendship. Its use of Hormone Monsters as anthropomorphized representations of the characters’ adolescence is a simultaneously brilliant and disgusting way to literally put the kids in conversation with their own changing bodies. But contrary to the opinion of most preteen boys, there are only so many dick jokes you can tell before they start to stale. And in its newly released fourth season, Big Mouth finally pushes beyond the embarrassing aches and pains of puberty to tell more nuanced stories about identity and mental health.

One of the most effective ways it does this is via the introduction of Tito the Anxiety Mosquito, who arrives at the end of the first episode when Nick, while fighting with Andrew, starts to worry that his summer camp best friend Seth Goldberg will like Andrew more than him. As he's stumbling around the woods panicking, Nick runs into the Anxiety Mosquito, who bites him twice, apologizing between chomps. Nick kills the bug, but just like anxiety (and mosquitos), a new Tito immediately appears beside him, taunting that Andrew hates him and that he and Seth are probably off making fun of him. The Anxiety Mosquito continues to catastrophize until Nick is on the ground crying in a full-fledged panic attack, surrounded by a cloud of buzzing insects as Tito yells, "You dead, lonely little virgin!"

Though Nick is the Anxiety Mosquito's first and primary target, Tito also appears to Andrew and Jessi throughout the season, stirring up Jessi's fears about failing at her new school and Andrew's worry that he accidentally killed his grandfather by deviating from one of his OCD rituals. Each time, the Anxiety Mosquito buzzes around the characters' heads, vocalizing and validating their deepest fears and alienating them from their friends and family — an upsettingly accurate depiction of the constant apprehension and paralyzing dread that often characterize anxiety.

While it’s become more common to see people experiencing anxiety onscreen, it’s often shown through panic attacks, sweating, or other physical responses. It’s rare to see portrayals of the debilitating thought patterns that also come with the emotion. Not only does Big Mouth use the incessant hum of the Anxiety Mosquito to illustrate the ever-present nature of anxiety, the character enables the show to demonstrate how anxiety affects the choices the kids are making — viewers can literally see when Tito’s never-ending word vomit distances Jessi from her friends or leads Nick to lash out at Andrew.

Big Mouth has delved into this territory before with the Depression Kitty, but she’s primarily visited Jessi during situational depressive episodes, like when Jessi’s parents revealed they were getting a divorce. With the Anxiety Mosquito, Big Mouth demonstrates how mental health struggles can affect a person’s broader identity and sense of self. This is novel for any show, but particularly one focused on preteens, a group whose struggles with anxiety and depression are often written off as moodiness instead of legitimate mental health issues. It’s even more significant to see the show handle these sensitive topics with such care and compassion.

Rather than portraying anxiety and depression as shameful or unmanageable, Big Mouth provides a balm for its teens via the Gratitoad, a therapeutic tool literally come to life. Soon after Jessi's new toad-obsessed therapist suggests that she develop a gratitude practice, she meets the character, a goofy and earnest anthropomorphized toad who helps the kids realize that expressing gratitude for the things and people they appreciate can make life feel a bit more manageable. Of course, the Anxiety Mosquito and Depression Kitty don't just magically vanish once the Gratitoad appears. But the character serves as an assuring reminder that while there’s no magical antidote to anxiety or depression, there are ways to help them feel a bit less overwhelming — a surprisingly tender lesson from a show whose series premiere begins with Andrew accidentally getting a boner in health class.

The Big Mouth kids may very much still be in the midst of puberty, but first kisses and periods are only a small sliver of the challenges that come with growing up. Sure, there are still plenty of poop jokes, but Big Mouth’s ability to approach mental health with the same candor and empathy as it does sex and hormones is proof that it's maturing right alongside its characters.