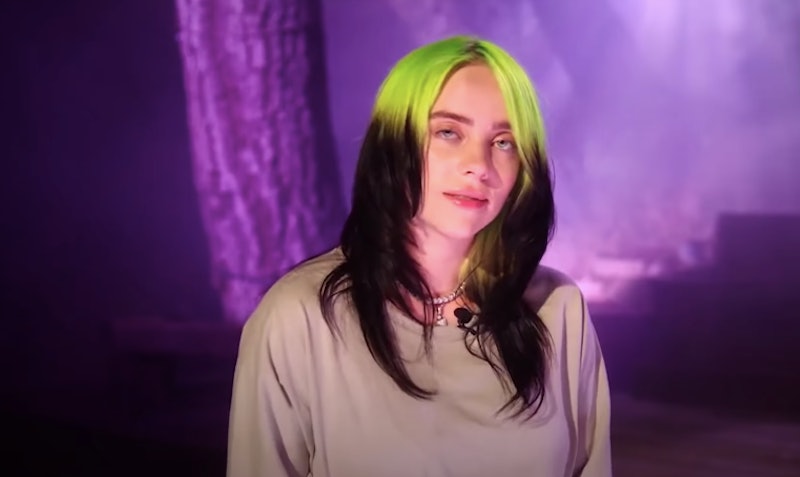 From speaking out against critics of her body and wardrobe to raising awareness about the importance of Black Lives Matter, Billie Eilish has never been one to hold back her opinions, especially concerning politics. But she took it to a whole new level at the DNC. Billie Eilish spoke out against Donald Trump before her performance on Wednesday, Aug. 19, and she held nothing back.

"You don't need me to tell you things are a mess," Eilish addressed the audience. "Donald Trump is destroying our country and everything we care about." And, she didn't stop there. "We need leaders who will solve problems like climate change and COVID, not deny them. Leaders who will fight against systemic racism and inequality."

The singer went on to explain how important it is to vote in the upcoming election, officially endorsing Democratic nominee Joe Biden for president. "That starts by voting for someone who understands how much is at stake, someone who's building a team that shares our values," she said. "It starts with voting against Donald Trump and for Joe Biden. Silence is not an option, and we cannot sit this one out."

Eilish herself will be able to vote for the first time this year, after turning 18 in December 2019, and she reminded all young people that the only way they can have a say in their own future is by showing up at the polls. "We all have to vote like our lives and the world depend on it, because they do," she concluded. "The only ways to be certain about the future is to make it ourselves." Biden approved her message, sharing the video of her speech on Twitter. "I’ll just say what @billieeilish said: vote like your life depends on it," he wrote.

For fans who know the singer's values, her words don't come as a huge shock. Eilish is a vocal supporter of the Black Lives Matter movement. "We have to address hundreds of years of oppression of black people," she said on Instagram back in May, calling out the "All Lives Matter" rhetoric. "The slogan of #BlackLivesMatter does not mean other lives don't. It's calling attention to the fact that society clearly thinks black lives don't f*cking matter!!!!!! And they f*cking do!!!!!!" She's also one of many singers who signed an open letter calling for the Governor of California, Gavin Newsom to support police reform legislation.

Eilish is also a climate change activist and has made numerous steps to raise awareness about the global problem, including putting on an eco-friendly world tour. She might still only be a teenager, but Eilish is quickly becoming one of the music world's most prominent political voices.