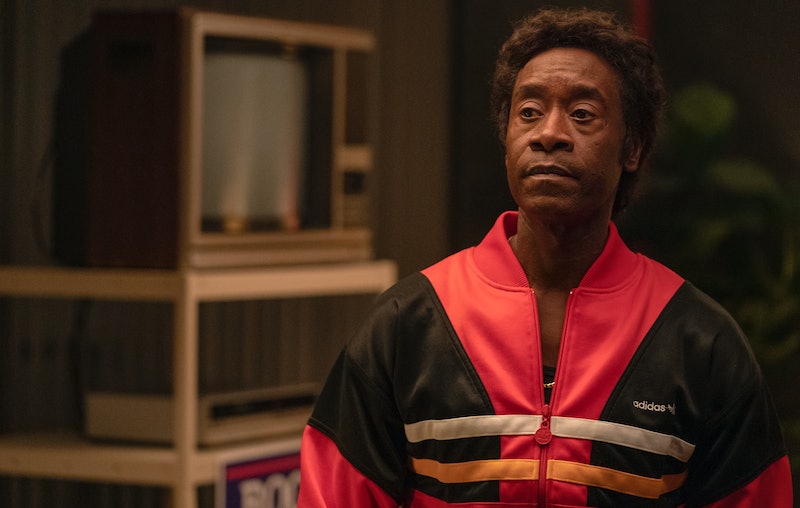 Now that the second season of Black Monday — the Showtime vehicle about '80s Wall Street starring Don Cheadle — is drawing to a close on Sunday, July 19, fans might be looking ahead to see what's next for the series. Although it was renewed for a second season in April 2019, Black Monday Season 3 still hasn't been greenlit. But that's understandable, given what a tricky time it's been for television production.

The release schedule for Season 2 episodes already had to be staggered due to the coronavirus pandemic. Per Variety, the current season of Black Monday stopped airing on April 12 and went on a several months-long hiatus before picking up again in late June. Although they had already finished filming the season before the pandemic hit, according to the article, all the post-production hadn't been completed.

Hopefully Cheadle and his costars Regina Hall, Andrew Rannells, and Paul Scheer will get the Season 3 order they're hoping for. But until then, here are five shows (and two movies) to help fill that Black Monday-shaped void, each of which either features cast members or captures the show's darkly comedic spirit.

Black Monday co-creator David Caspe met his wife Casey Wilson on the set of his short-lived but beloved sitcom. As a bonus, those interested can check out Caspe's similarly canceled series Marry Me, which ran for one season and starred Wilson and Ken Marino.

Where to stream: HBO Now or HBO Max

Diallo Riddle and Bashir Salahuddin created this IFC show, which depicts a fictional music variety show from the '70s. Highlights include songs like "Time Loop" and the above "Drop It Low (for Jesus)," which went viral in 2019.

Where to stream: Hulu with a Showtime add-on or Amazon Prime

Chances are you've already seen the wildly popular 2017 comedy Girls Trip (if not, there's no time like the present!). However, Regina Hall also starred in this 2018 comedy, which also deserves your attention. Support the Girls is a critically acclaimed though under-the-radar film following the manager of a Hooters-like restaurant (Hall), which she's struggling to keep afloat.

Before Michael Showalter directed The Big Sick or co-created Search Party, he both co-wrote and starred in the 2001 cult comedy Wet Hot American Summer (which is currently only available to rent or with a Starz subscription). The summer-camp classic was then revived as two miniseries for Netflix: First Day of Camp and the less-successful Ten Years Later. These shows feature plenty of recognizable faces, including Black Monday fixtures Ken Marino and Paul Scheer.

Where to stream: Peacock

More like this
Wait, Is 'Happy Valley' Not Actually Over?
By Darshita Goyal
The Banned 'Friends' Ad Shows Monica As You’ve Never Seen Her Before
By Sam Ramsden
Ashton Kutcher Wants Danny Masterson “To Be Found Innocent” In Rape Retrial
By Jake Viswanath
'Abbott Elementary' Fans Probably Missed This 'Parent Trap' Easter Egg
By Sam Ramsden
Get Even More From Bustle — Sign Up For The Newsletter
From hair trends to relationship advice, our daily newsletter has everything you need to sound like a person who’s on TikTok, even if you aren’t.