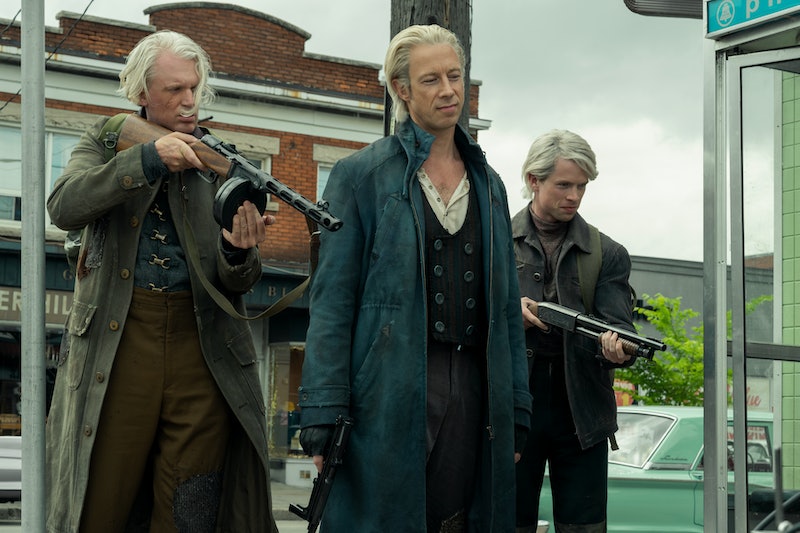 According to The Handler, the blonde guys in The Umbrella Academy Season 2 are known as The Swedes. "Commission muscle. Triplets. Like Huey, Dewey, and Louie, only a little more meshugas," The Handler explains to her adopted daughter Lila. Their names are Otto, Axel, and Oscar, and The Handler says she's the one who sent them to kill Five's siblings. Just think of them as the new Hazel and Cha Cha; they're brutal antagonists whose sole mission is to keep the timeline intact.

The triplets are also just flat out strange. They hole up in the house of a woman they decapitated, and in their spare time seem to enjoy throwing knives at each other (??). The most analytical one is the oldest, Axel, but it's hard to tell what any of them are thinking since they rarely talk.

During The Handler's conversation with Lila, she's intentionally vague about what her and The Swedes mutual end goal is. In Episode 5, we learn there really isn't one; she's just using The Swedes to ensure that both them and the Umbrella Academy take each other out. It's never explicitly stated why she wants this, but The Handler assumedly sees The Swedes as a threat to her taking control of The Temps Commission. So, she sends the trio out on a mission to assassinate Diego, but is in actuality just a trap that ends up getting Otto blown to bits.

Episode 6 further reveals that The Swedes didn't even know it was The Handler who was faking the orders and sending them on missions. Believing it was Diego who set the trap, The Swedes again fall for The Handler's directions to where he lives. They arrive at Allison and her husband Ray's house instead, and Allison uses her powers to persuade Axel to kill Oscar.

Only too late does Axel realize he's been played. The mission capsules they've been sent were crafted and glued by The Handler, and they smell vaguely like her lavender perfume. In the final battle, Axel shows up and kills The Handler in front of the Umbrella Academy. He drops his gun, walks away, and boards a bus full of Klaus' cult members because at that point, why not?

It's not clear how significant Axel will be going forward. Loyal only to his family with blood on his hands, he's strikingly similar to old man Five, just way less chatty. Is it possible he'll show up as an ally in a future season? Are the scenes of him gazing at a grainy photo of his brothers and his mom a sign he can change, or is him boarding Klaus' bus the final sign that he's simply saying "Hello" and "Goodbye?"