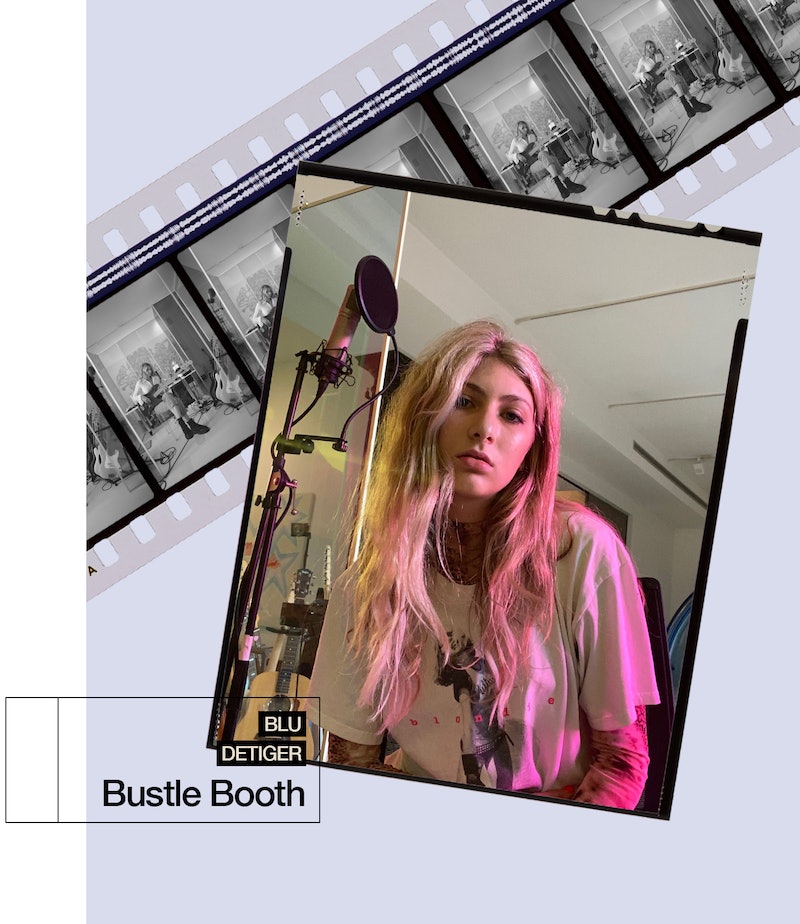 During Blu DeTiger’s final show at New York’s famed punk rock club CBGB (which closed in 2006) the bassist did something she thinks might have been illegal. “I took a piece of the wall,” says DeTiger, who was 10 at the time and performing at the venue as part of the School of Rock music program. “It was kind of gross [there] and the bathrooms were disgusting. But it was cool, my idols played there. So I took a piece of the wall that was covered in stickers for the memories.”

The New York native first picked up the bass when she was 7. “My brother played the drums, so I went to Guitar Center [to pick an instrument of my own],” she explains. “I chose [the bass] because I was trying to be unique and different. But it was taller than me. I have these really funny photos with the instrument where it even goes over my head.”

In her high school years, the now 22-year-old DeTiger became a well known DJ, playing some of New York’s most popular clubs and spinning at parties for artists on the rise like photographer Tyler Mitchell. “I was underage and I’d be like, ‘C’mon I’m a DJ, please let me in!’ Sometimes I’d have to show my fake ID or do some begging,” she jokes. But once through the doors, crowds were captivated by DeTiger’s bass-infused take on DJing. “I would try out different songs and play bass over genres like pop or hip hop,” she says. “I would be making up the bass lines [as I went] and people would freak out.”

It’s these same unexpected, experimental bass covers of Top 40 hits that have made DeTiger a TikTok sensation. (She currently has over 900,000 followers on the platform.) DeTiger’s videos are set in her multi-colored, neon-paneled studio, where she shreds along on her electric blue Fender to songs like “Redbone,” “WAP,” or “American Boy," often clad in leather pants. “I love doing all the hip hop [covers]. They give me some freedom and flexibility because I'm making up my own part,” she says. “Hopefully people eventually hit me up to play on hip hop beats.”

Off the app, DeTiger’s sound is much more of the indie pop variety, with the influences of DeTiger's recent tour mates Caroline Polachek and Fletcher felt on her recent releases “Figure It Out,” and “Cotton Candy Lemonade.” Despite being recorded in quarantine, the tracks have an optimistic, escapist quality — granting listeners a well-deserved dose of feel good vibes. “I like to make happy stuff. Something that makes you feel good,” she says.

While her music has also started going viral — ”Figure It Out” has been streamed over 16 million times on Spotify — the artist doesn’t measure her success by those metrics. Instead, it’s in the legions of young girls she’s inspired to start slapping. ”I've been doing these Zoom Hangouts with some of my fans where they'll ask questions [about playing bass], and the other day I saw a little girl sitting there with her bass, ready to play. It was awesome.”

Get to know more about DeTiger— including her love for The Bachelor Presents: Listen to Your Heart — in her Bustle Booth questionnaire below.

“Who you gonna call… ghostbusters”

The Bachelor Presents: Listen to Your Heart

More like this
Hailee Kaleem Wright's Topsy-Turvy Path From MTV To Broadway
By Samantha Leach
Jennifer Coolidge Recites “Jenny From The Block” Beside J.Lo In Her First TikTok
By Jake Viswanath
'That '90s Show' Star Callie Haverda Got Advice From Mila Kunis & Ashton Kutcher
By Brad Witter
Austin Butler Recalls Lisa Marie Presley Showing Him Elvis’ Bedroom
By Jake Viswanath
Get Even More From Bustle — Sign Up For The Newsletter
From hair trends to relationship advice, our daily newsletter has everything you need to sound like a person who’s on TikTok, even if you aren’t.