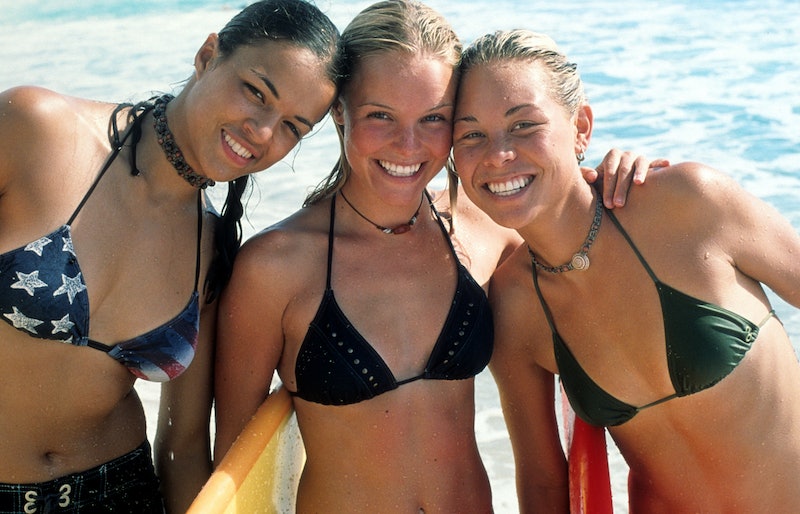 In this era of reboots, revivals, and sequels, there's now a chance that a Blue Crush sequel could happen 18 years after the movie hit theaters, thanks to support from the three main stars. During an Aug. 7 virtual reunion with Kate Bosworth, Michelle Rodriguez, and Sanoe Lake, the actors admitted they are ready to surf again as Anne Marie, Eden, and Lena. Now all they need is for Hollywood to get on board.

The reunion, which aired on Bosworth's YouTube channel, ended with the lead star asking her former co-stars, "Everybody wants to know, would we be up for a sequel?" Without hesitation, all three actors said they are ready, willing, and able to hit the waves in Hawaii. "Yes, obviously," Lake declared. Rodriguez answered excitedly, "I would totally, man. I love you girls and I love Hawaii. You don't have to ask me twice." As for Bosworth, she said, "I'll put my life on the line again. I don't mind."

They also discussed what the sequel could include, like their characters serving as surf instructors, while promoting the importance of protecting the ocean and other parts of the environment. The 2002 movie focused on Anne Marie (Bosworth), Eden (Rodriguez), and Lena (Lake), working as housekeepers in a hotel, all while being avid surfers. There was, of course, also a love story that involved Legally Blonde's Matthew Davis. He played a professional football player, Matt Tollman, who fell hard for Anne Marie. Mika Boorem also starred as Bosworth's little sister, Penny.

Now, technically, there was a Blue Crush 2 that came out in 2011, but it wasn't exactly a sequel to the first film. There's no beating the original, a film that fans still love to this day, especially thanks to Bosworth, Rodriguez, and Lake's memorable characters. Like Bosworth noted during their reunion, "For me, Blue Crush is the one that everyone, and especially young girls, come up to me and say, 'You inspired me to do this! You guys are all my heroes!' It's so incredible."

In the current environment when women are still coming together as we continue to fight for equality, another Blue Crush sounds like a great idea. It's still too early to say whether or not a sequel would actually happen, but now that the original stars are on board, never say never.

More like this
12 Years Ago, Austin Butler Manifested His Oscar Nom In This Disney Movie Scene
By Jake Viswanath
Sandra Bullock’s Razzies Speech Proves She’s The Ultimate Miss Congeniality
By Sam Ramsden
Anne Hathaway Shared A "Thrilling" 'Princess Diaries 3' Update
By Darshita Goyal
'Abbott Elementary' Fans Probably Missed This 'Parent Trap' Easter Egg
By Sam Ramsden
Get Even More From Bustle — Sign Up For The Newsletter
From hair trends to relationship advice, our daily newsletter has everything you need to sound like a person who’s on TikTok, even if you aren’t.