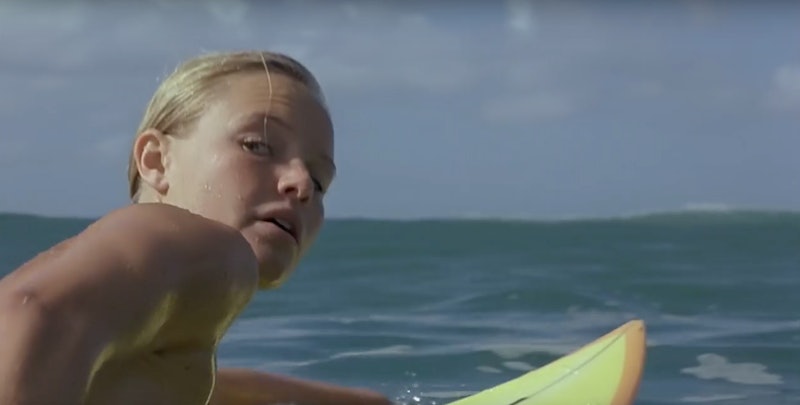 Thanks to it's awesome female characters, 2002's Blue Crush totally holds up today, largely because its Anne Marie and her friends exemplified some of the same traits women idolize 15 years later. They were hardworking, independent, loyal, and fearless. Kate Bosworth starred in Blue Crush as a young surfer living on her own with her younger sister, standing up to the boys and life's struggles, while she braved the Banzai Pipeline (or "the Pipe") of Hawaii to achieve her dream of becoming a sponsored surf star. But there's one moment from Blue Crush that shows just how scary — and authentic — the surfing in the film really is.

The massive waves are as horrifying to watch now as they were then, but these actors handled it like champs. Taking a look at this blast from the past proves the women and crew of the film were dedicated to giving viewers a real, authentic Hawaii surfing experience — so much so, one very recognizable pro in the movie actually got injured while shooting — and it was captured on camera.

In the beginning of the film, Anne Marie (Bosworth) is intimidated by the water when she first encounters the daunting "Pipe," and the surfers who got beat up by it. In the scene, fans may remember seeing a surfer running up to the shore with a cut upper eye that's bleeding. But this wasn't just any movie extra — and it definitely wasn't planned.

According to Cory Hamblin's 2009 book Serket's Movies: Commentary and Trivia on 444 Movies, this was actually professional surfer and world champion Tom Carroll (who's also listed in the IMDb credits). The book says, "This was a real injury; Carroll had wiped out on the reef just seconds earlier." The accident briefly made its way into the film in a shot that's hard to forget.

Shot in Oahu, Hawaii, the film mostly used real-life surfers and locals from the movie's North Shore setting as extras, according to the book. The film's director John Stockwell and producer Brian Grazer reportedly distributed copies of the script to a large group of locals who are seen as surfers in the movie. Not to mention, there were also a handful of additional pro surfer cameos including Rochelle Ballard, Keala Kennelly, Kate Skarratt, Megan Abubo, Layne Beachley, Tamayo Perry, and Fred Pattachia.

While Bosworth and her co-stars Michelle Rodriguez, Sanoe Lake, and Mika Boorem had stunt doubles, they also took on a large amount of surfing and demanding physicality themselves. Lake was actually a real-life surfer and Rodriguez, who once recalled the crazy 10-foot waves, reportedly did jet ski stunts herself. Bosworth said she gained 15 pounds of muscle from training seven hours a day for the vigorous role.

Knowing how realistic this portrayal of hardcore surf culture was, fans should be confident about loving Blue Crush and its badassery, even all these years ago.