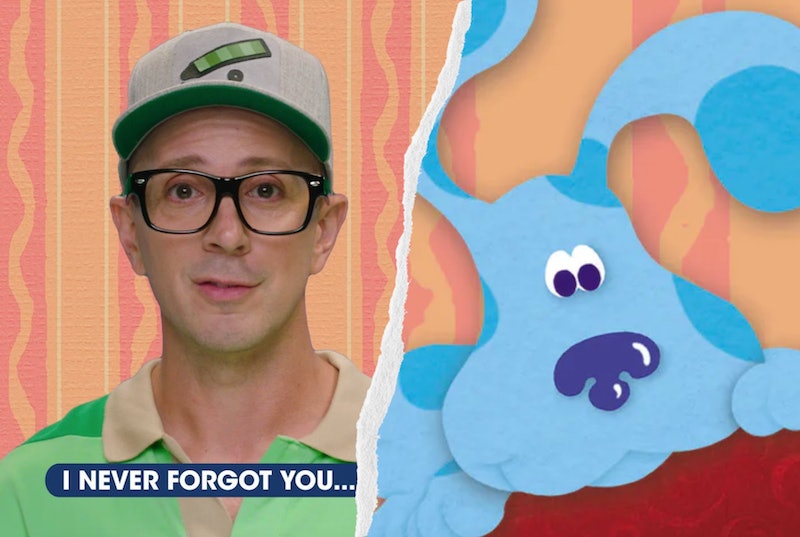 It’s almost too difficult to believe, but the Nickelodeon show Blue’s Clues is now 25 years old as of Sept. 8, 2021. That’s right, the popular children’s program first premiered on that day a quarter of a century ago in 1996. Since then, it has remained in the hearts of an entire generation who grew up with Steve, Mailbox, Mr. Salt, Mrs. Pepper and, of course, Blue herself (yes, Blue is a girl). Now, nearly two decades after the original host left his post, he has finally reached out to millions of fans with a video that instantly went viral on Sept. 7, touching countless people who missed him dearly.

Steve Burns, who built his career off of portraying the aptly named Steve in Blue’s Clues, returned to speak to fans via a short clip posted on the Nick Jr. Twitter account in celebration of the franchise’s 25th anniversary. The actor explained that he left the show that made him a star to go to college, and then he went on to tell those watching that he’s always remembered them and that he’s proud of what the fans have accomplished in their own lives. “After all these years, I never forgot you ... ever,” the 47-year-old said in the video, “and I’m super glad we’re still friends.”

Burns left Blue’s Clues after several years and more than 100 episodes. It was a moment that shocked viewers. His departure left a vacancy that is still talked about today, and for a long time afterward, rumors spread about why he may have moved on, with some suggesting he overdosed on heroin or got into a car accident. None of those turned out to be true, and the actor dispelled them all over time. He insisted that he was simply ready for his time on the program to end, as he was getting older and he wanted to pursue other endeavors, such as higher education, which he confirmed again in this new video.

After running for six seasons, Blue’s Clues went off the air, until it was rebooted as Blue's Clues & You! in 2019. Now, the latest iteration is going strong, as a new set of young people learn from and enjoy the beloved characters once again as well as the latest host, Joshua Dela Cruz, who followed Donovan Patton’s hosting footsteps. The three reunited to shoot several videos for the 25th anniversary, including this one in which they all watch their first episodes.

The Nick Jr. video tweet of Steve has already accrued more than 1.5 million likes in one day, and it has countless tweeters in their feelings — in the best way. Here are some of the best tweets about Steve’s comeback moment and his sweet sentiments.